There would be few disappointed attendees from Mansionair’s first Melbourne performance of the Shadowboxer tour, which packed as much power as it did tenderness into an hour-long set. 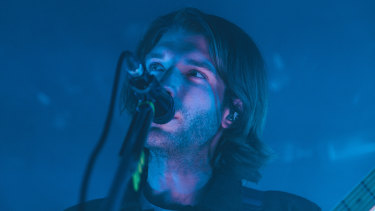 This time, they came equipped with a shiny new toy: their debut album, Shadowboxer, released four years after their first track Speak Easy.

The show's encore typified the band's seamless transition between between falsetto-littered vocals and energetic dance beats: first an acoustic version of Speak Easy – a rendition that made a heavy arm around your friend unavoidable – then their most well-known track, Line of Sight, a collaboration with American electronic duo Odesza which last year earned them a Grammy nomination. 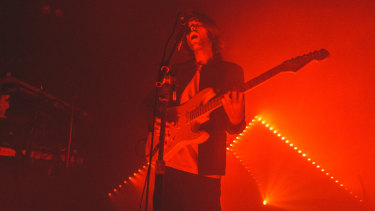 Mansionair’s indie electronic music is far better suited to an indoor setting, as opposed to their afternoon set at Laneway in February.Credit:Rick Clifford

Lead singer Jack Froggatt was impressive in the flesh and the northern beaches Sydney boy gained plenty of fans when he told the almost-full room: “Melbourne, you’re very f—ing cool”.

“We love this beautiful city. We always diss on Sydney when we’re in Melbourne … I shouldn’t be saying this stuff!”

Froggatt also reserved special praise for “Paddy”, the towering, long-haired crowd member whom the lead singer recognised in the same front row position as during the band's 2018 tour.

Paddy, who head-banged through every track, and the remainder of the young crowd would have few complaints about the tracklist: popular songs Astronaut (Something About Your Love), Falling and We Could Leave were peppered throughout the hour-long set, keeping revellers nodding and singing along.

One jarring moment came 25 minutes in when, during the epic ending riffs of Easier, Froggatt invited the crowd to sing with him before diving into the cut-back acoustic beginnings of Best Behaviour. It seemed to cause some restlessness in the audience, but the laser-drenched trio recovered.

Their high onstage energy and flawless execution illustrated that Shadowboxer was an album designed for an intimate nighttime set, making the well-loved carpet floors of The Corner the ideal venue.

Remembering Power Trip's Riley Gale, a Ferocious Frontman Who Made You Feel Like Family