If you are looking for a gooey, romantic love song for Valentine’s Day, you will not find it on Lucky Daye’s new EP. Consisting of duets with various female artists, the project, titled Table for Two, seems destined for pure romance, but it’s about breakups, frustrations, and miscommunications instead. And that’s okay. Not everyone is going to be showered with roses and chocolates this February 14. You might be in the middle of a fight, or lonely, or decoding your Hinge match’s latest message—for those much more realistic occasions, Daye’s new offering is more than fitting.

A different woman appears on each of the EP’s six tracks, bringing rich emotion and vocals that blend smoothly with Daye’s: Yebba, Tiana Major9, Mahalia, Ari Lennox, Queen Naija, and Joyce Wrice all contribute. The songs are about being at your wits’ end with a partner, being left on read, inherent differences, not being able to read the other person, dreamlike infatuation, and not wanting to regret catching feelings.

Daye, born David Brown, didn’t make this EP on purpose. The idea came about when he was working on his next album and realized that he had a lot of collaborations with women. So he thought, Why not just make some songs with only women? “I’m so intrigued by how you guys think,” he tells BAZAAR.com on Zoom, explaining the inspiration behind the endeavor. “So I’m just trying to tap into it from your angle. And what better way to do that than with people that create raw, organic thought and feeling from nothing? I felt like those ladies on the album brought that. And I appreciate that, because without them, it wouldn’t even be anything.”

Daye wasn’t even sure if he wanted to release the music. “For me, it wasn’t about putting those songs out. I just did that for myself.” But his former managers heard the material and played it for his label, without his permission, he says. The label was hooked and wanted to target the release for Valentine’s Day. Daye called out the irony. “I’m like, ‘[There’s] no love songs! It’s literally breakup songs,’” he laughs. But after some convincing—there’ll be some lonely people on Valentine’s Day after all—he agreed. “’Cause I’m definitely going to be by myself on Valentine’s,” he says.

Though he has a stacked list of features on Table for Two, the New Orleans–born R&B star hopes to link up with Ella Mai and Summer Walker in the future. But he’s open to any potential collaborators. “I got enough for everybody. It’s just whether or not they can convince themselves that they can do it.”

Table for Two is out now, arriving almost two years after Daye’s celebrated debut album, Painted, which earned him four Grammy nominations. Before it dropped, the singer talked to us about how the project came to be.

You have such a talented roster on the EP. I’d love to know how you connected with everybody.

What’s crazy is Yebba just happened to be in town. And she was saying she wanted to work. And I was like, “Well, I’m off to the studio right now, you want to go?” She came in and I started singing these ideas. And when she did her idea, she thought it was trash. So she started singing, “Oooh, this shit is trash.” I was like, “We’re keeping that.” That’s how the song started, literally. My whole thing in that studio session was to convince her that everything she thinks is trash is gold. So that’s literally how that song became that song.

I was in New York for the Tiana Major9 song and she happened to be there, and we got a call, like, “Can you book a studio? Somebody wants to work with you.” She had to leave, but we started a great idea. And I guess she asked for the record and then sent it back to me, like, “Look, I finished it.” And I was like, “Oh, crazy. Let’s finish it-finish it.” That one was pretty easy too.

The next song was the Mahalia song. That was pretty simple. We didn’t get together because she’s in the U.K. I was able to get her to see the vibe the song was supposed to give. And she nailed it. I didn’t have a doubt that she would, but it was amazing that she did it.

The next one was with Ari Lennox. And what’s crazy is I didn’t think anybody would get on that song. I was just trying to do, like, a tribal song, and it turned out to be less tribal, more love song. And I feel like I’m talking to myself so much in these songs. I’m trying to figure it out. “What is going on? Why don’t I understand women? Why don’t women understand men? Why do they not like each other when we’re supposed to be in perfect harmony?” … And Ari actually cut up the song when she came to L.A. We cut that song at EastWest [Studios]. I think I had my verse, a hook, and a second verse. And she was like, “I can’t sing that.” I was like, “Yes, you can!”

Did you mean the lyrics or the notes?

Just the way that it flows, because she has a super soulful, a certain frequency. I don’t even know what it’s called but I can feel it. And I kind of knew that it would be a little bit too much me and not enough her. So I was like, “All right, bet. You write a new verse, I’ma sing that, and you sing mine.” And then we did it that way. And then after that, the last phase was to intertwine them. That was fun because she’s super fun. We probably recorded like three or four songs at night.

After that, you got the Joyce Wrice song. It was a vibe that I think was missing, tempo-wise. She kind of did her part where she was; I did my part where I was for the EP. And then the Queen Naija song, you already know that one. It came out when she put that album out. I just wanted to put it out as well. 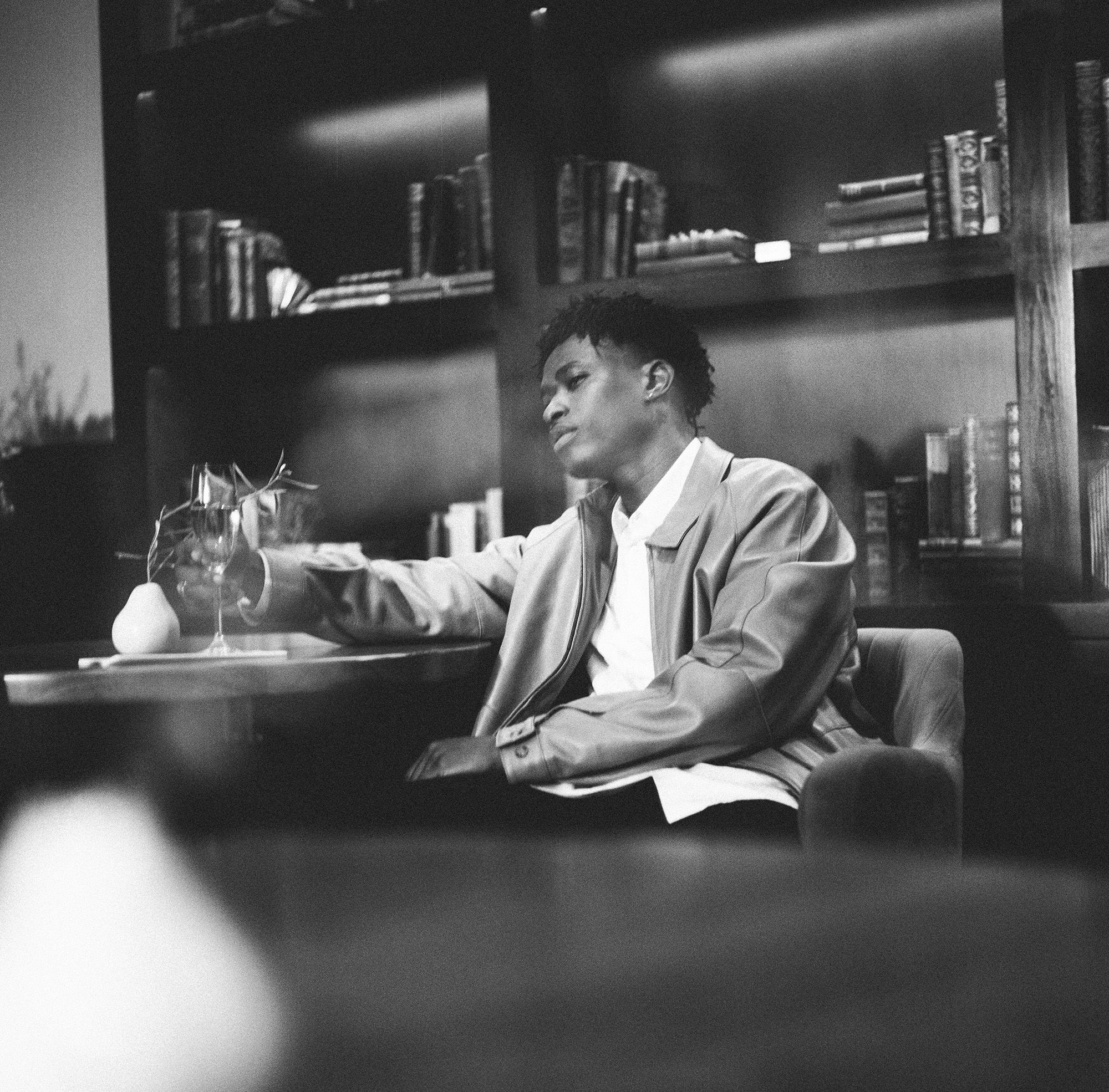 Some of these collabs you and the other artist recorded together, some of them you recorded separately. But you can feel the intimacy on these songs, because there’s a lot of chemistry. How did you create that when you’re apart?

I think chemistry isn’t something that you create. It’s just something that’s there, and all of those individuals, we naturally just click. Not to boast, but I kind of click with everybody. I love people so much. I think they felt my energy, and I wanted to create. Like, “What’s going on with this love thing? Why is it not working?” And I want to do different angles. Some people take it personal and when you leave them on read. Or some people feel like they just end up in a tough position. They can’t love you. Maybe you’re cool, maybe you’re nice and they like hanging with you, but it’s just not the time. And the other one is, if you can’t take me, then leave. It’s just different angles of why love is so hard.

This is a duets project. Were there any great duets you listened to growing up or that you love to listen to as comfort music now?

There was that KeKe Wyatt and Avant song, I used to sing that song all the time. “Spend My Life with You” [by Eric Benét and Tamia]. The Boyz II Men and Mariah Carey song, [“One Sweet Day”], I’m a fan of that song. It’s just like, we don’t do them no more. And I feel like they should be here. 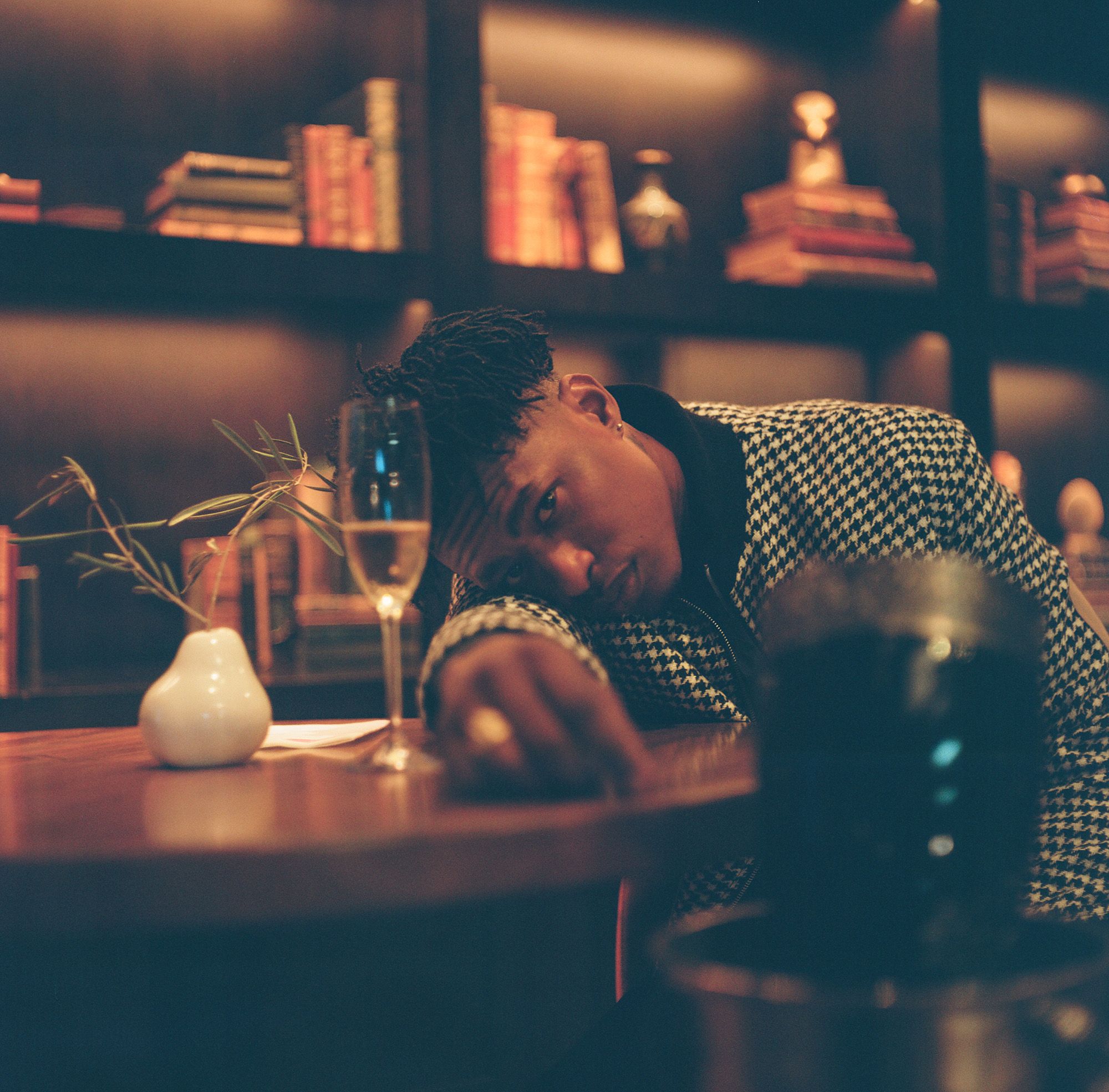 What can we expect from your next album?

You can expect me going back to myself. … I came out of my bubble for the EP. And the album is just me again. I kind of wanted to show selflessness and do stuff that I felt people that don’t even know me would like. So if they heard it, they would be like, “Oh, this is tight. Who is this?” And then, they’ll go to my stuff and be like, “Oh, this is not even what he do.”

So it’s kind of a new sound for you?

Yeah, it’s definitely a new sound. I try to evolve. I’m just comfortable enough to go there. You know what I mean? I ain’t scared. I’m not afraid. But I wanted to just give people something that they could eat easy.

Painted was released almost two years ago. How did that album change you, now that you look back at it?

That’s pretty crazy. I still get, like, mentions on IG. I thought it would’ve stopped by now. I also think it’s a grower, not a shower. [Laughs.] We’re going to be listening to it for a while, and I believe that a lot of people will find inspiration from it in the future versus just something to eat for now. It’s a longevity album, and that’s what I want to make.

To be able to be on an EP with different ladies, especially women of that caliber with that type of talent, is a blessing for me.

Definitely. What do you want people to take away from Table for Two?

One, it’s a prequel to the album. Two, it’s not going to be just the first and last thing. I love uplifting women. And I feel that women, they’re about to take over. Y’all are about to take over everything, and I love that. So I want to be a part of just building you guys up. To be able to be on an EP with different ladies, especially women of that caliber with that type of talent, is a blessing for me. So I got what I wanted to get out of it, but I want people to see women and men can work together. And we did it successfully. And nothing’s impossible. That’s the Valentine’s part: the fact that I’m on a song with a woman, a different woman every song, a different feel to every song, but different angles of why it don’t work.

You said you’re uplifting women with this EP. What message would you have for other male artists about doing the same thing?

I can’t change their life. I just want to be an example. And I learned that you have to lead by example, even if you talk, talk, talk, talk, talk, people are still going to wait for you to do it. So I wanted to be the first person that started doing it. Even if it takes a long time for somebody else to do it, and where they wait for me to come out with the second female EP, or the third one, or the fourth. I’m going to just keep doing it until people catch on.

This interview has been edited and condensed for clarity.