Home » Music » Influencer Nikita Dragun asked her fans ‘what race’ she should be that day, reigniting ‘blackfishing’ accusations 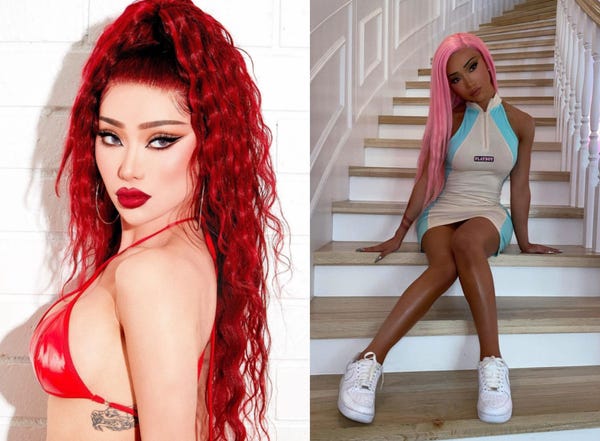 An influencer known for her jaw-dropping Instagram looks and cosmetics line drew outrage over the weekend after she asked her followers "what race" she should be that day.

Nikita Dragun, a beauty YouTuber with more than 8 million Instagram followers, has repeatedly been criticized for darkening her skin tone with filters, lighting, makeup, and tanning. Her dramatic transformations have caused controversy since 2017, but more recently the term "blackfishing" has been used to describe Dragun's posts.

"Blackfishing" is a play on the word "catfishing" — an online trend where individuals pretend to be someone they're not, usually to fool a potential partner. With "blackfishing," social media users will artificially darken their skin tone for photos, and the practice is often paired with cultural appropriation, like wearing traditionally Black hairstyles — something Dragun has also done.

Nikita Dragun, who is mixed-race, denies that she artificially darkens her skin tone

Dragun appeared to be making a joke out of her controversial reputation when she tweeted "what race is nikita gonna be today ?" But her post drew immediate, harsh criticism, including from Black beauty YouTuber Nyma Tang, who quote-tweeted Dragun with "this s— is not funny."

One of Dragun's close friends, massively popular beauty-guru James Charles, even liked Tang's tweet, according to YouTube sleuths who got screenshots of it. He has since unliked the tweet.

In response to the drama around her statement, Dragun said that she was "tired of having to defend myself on every post," since she's mixed-race and her "mom is mexican" while her "dad is asian."

Critics compared a picture Dragun posted to Instagram in May 2020 where she appears very pale to one she posted in September 2020, which drew criticism immediately after she posted it, since her skin appears so much darker.

Dragun also responded to an old picture of her that some said was blackface back in 2017, when it was first posted. It's a shoot for Jeffree Star Cosmetics, and at the time Dragun said the creative direction of the shoot led her to looking darker. She wrote, "the creative design for the imagery called for high contrast between light and shadow, and low lighting, which lends itself to creating a mood for the imagery" in a 2017 statement to Seventeen.

Dragun, who was part of an explosive feud with Jeffree Star Cosmetics creator Jeffree Star in 2018, now says she had no control over the 2017 imagery.

"[I] was hired as a model. i didn't have any control over editing. i showed up did my job and left. this was a photo from that same day," Dragun wrote, including a photo of her and Star from the 2017 shoot with a noticeably lighter skin tone (she cropped Star out).

Before ditching Twitter with a peace sign emoji, Dragun also wrote, "growing up mixed i was never enough or fully accepted. i don't have to pick a side. i am not incomplete of my races. i do not lack anything. i am proud of ALL of me."

Dragun isn't the only non-Black influencer or celebrity to be accused of "blackfishing," as stars like Rita Ora and the Kardashians have also been accused of co-opting Black culture for their social media aesthetics.