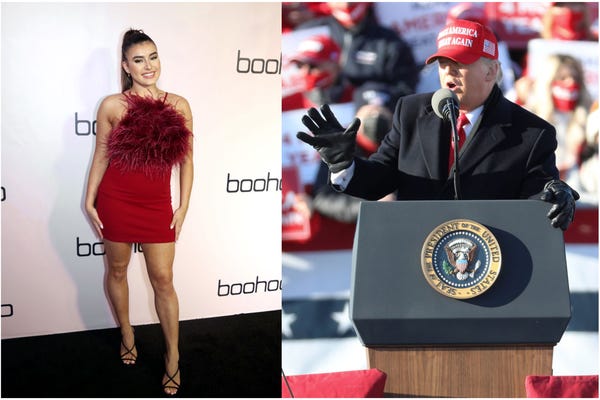 Kalani Hilliker, an influencer and former "Dance Moms" star, expressed support for President Donald Trump in Instagram stories and on Twitter, leading to criticism from some followers.

In an Instagram story on Monday, Hilliker, 20, told her 6.1 million followers that "everyone has the freedrom to express their own opinions" and that "we need to all come together as americans [sic] and respect one another." In a subsequent story, Hilliker showed footage that appeared to be from Trump's final campaign rally in Grand Rapids, Michigan.

On Twitter, she used the "Trump202020" hashtag, indicating support for the incumbent president. "No matter who you're voting for use your voice and vote," Hilliker said in a tweet. "It's your right."

In response to the tweet, some followers made "Dance Moms" jokes, writing that other subjects of the Lifetime reality series deserved dance solos on the show over her. "EVERYONE SAY IT WITH ME, MADDIE DESERVED ALL THE SOLOS," said one user, referring to Maddie Ziegler, one of the most famous girls from the series.

While Ziegler, 18, has not explicitly voiced support for former Vice President Joe Biden, she has also encouraged her followers to vote and interviewed Biden's granddaughter, Finnegan Biden, in an Instagram post.

Nia Sioux, who also starred on "Dance Moms," said in an Instagram story on Tuesday afternoon that while everyone should respect one another, "it's so hard to respect a president who doesn't respect me, or women, or minorities, or the LGBTQ community." Sioux, who is Black, added: "I'm all for respecting people but at a certain point when someone can't even denounce white supremacy how can you have respect for that person?"

Screenshots of Hilliker's Instagram stories and tweet made it onto @tiktokroom Instagram page, which tracks drama within the world of TikTok creators and other social-media influencers. Comments from followers calling Hilliker's support for Trump "embarrassing" got thousands of likes.

Actress Skai Jackson, 18, commented on one of the posts about Hilliker's stories, writing, "Why the picture of Donald?"

A representative for Hilliker did not immediately respond to a request for comment.

The extreme transformation of Busta Rhymes