Home » Music » H.E.R. on Healing Through the Holidays and the Importance of Buying Black

For R&B musician H.E.R., 2020 has been a year of reflection and a show of her strengths.

Rather than allowing her rapid ascension to come to a standstill with the onslaught of the coronavirus pandemic, like a true artist, she pivoted. The multitalented musician—who plays the guitar, piano, drums, and bass—swapped packed venues for the more intimate setting of her home, where every one of her 3.5 million Instagram followers could tune in to watch her perform. She released a signature guitar in collaboration with Fender, making her the first Black woman to do so, and made her debut on Saturday Night Live—all while steadily releasing some of the most self-assured and socially conscious music of her career thus far.

With H.E.R., it’s music over everything else, and her songs serve as her truth. If her latest releases, including the tracks “I’m Not Okay” and “I Can’t Breathe,” prove anything, it’s that she has never been more dedicated to speaking out and supporting the Black community—her community. That sentiment rings especially true as we head into the holidays, bringing an emotionally tense year to a close.

Below, we speak with the musician ahead of her performance today on Facebook’s #BuyBlack Friday Show about how she continues to create in quarantine, why buying Black is more important now than ever, and how she will continue to harvest joy this holiday season.

This has been a crazy year to say the least. What has it been like making music in quarantine, and how have you managed to stay creative and inspired in a year like this?

It was hard in the beginning, but just having the whole year planned out, and then suddenly, everything being canceled and having that uncertainty, not knowing what’s going to happen, what life is going to be like—it was just a lot of anxiety. So it was very hard for me to create in the beginning of quarantine.

I was definitely producing a lot, but writing, it was a struggle. And then, when the George Floyd protests started to happen, I wrote “I Can’t Breathe,” and I found some inspiration in the anxiety, in the pain everybody was feeling. And just the research, the knowledge that everybody has gained because of this and just people opening their eyes. So I wrote that song in the midst of everything.

I’ve been fueled to create more music and, even more so, music with substance and just real stories and feelings that I think we all have felt through this whole thing. It’s been a roller coaster of emotions, but, yeah, I think there’s a little bit of peace from these past few weeks. I’ve been in a good flow, in a workflow.

You have a performance with Facebook on the #BuyBlack Friday Show, and you also recently had your major SNL performance debut. How has the current pandemic affected how you approach your live performances? They still look amazing on our end.

Thank you. I mean, it’s kind of been cool. It’s also been frustrating at this point. I’m ready to get back on a stage, but it’s been cool to be creative and [still find ways] to perform. I think I’ve just been so grateful for that, that’s helped me. But having the Instagram Lives in the beginning was really cool, because fans never saw me that way, and it was much more intimate. It’s like you’re in my house, and it’s just me and a guitar, and you sometimes see that but not as much as you have in this quarantine.

Much more relaxed and simple. And then having to do some of these Zoom performances has been cool, because I still feel connected to people. And some of these other performances, I’m shooting in a studio, and it’s great, but obviously, there’s nothing like the real stage. But like I said, I’m just grateful to still be able to perform.

You’re partnering with Facebook and the #BuyBlack Friday program. What does buying from Black-owned businesses mean to you, especially in a year like this and especially as we head into the holidays?

Listen, I’m excited and happy that people are promoting buying Black. It’s just so much bigger than we think. We talk about the poverty gaps in households and the household income of a white family, then a Black family. There’s a really big gap there. So buying Black is the beginning of equality. It starts, I think, with the economics, and it’s definitely going to be a huge step into equality and giving Black business owners equal opportunities. And it’s going to create more jobs for Black people.

It’s not even just that—it’s the representation of supporting a Black business. Then young girls, young Black men, young Black women are seeing more businesses in the mainstream getting more love with people who represent them and thinking, “I can do that. I can start a business. I can have a hair company like Miss Jessie’s,” or, “I can be a designer like Pyer Moss and people like that.” It’s representation and it’s equality and just showing that love all across the board and lifting up and supporting Black businesses.

It’s very important. I’ve been doing this thing where I’ll Google a coffee shop, or whatever I need at that moment, and I’ll Google a Black-owned business of whatever it is I’m looking for in my area. So I think the more we do that, the more we lift up the community, the more equality we have. 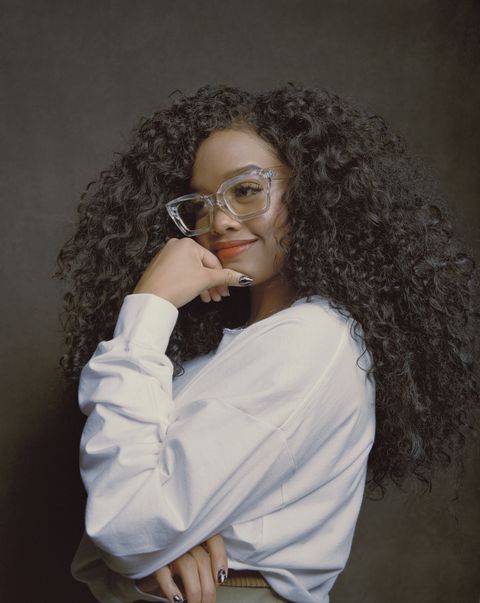 We’re becoming a lot more intentional with how we use our dollars right now, which is an amazing thing for sure.

I think it has exposed a lot. You have no choice but to be intentional. If you’re not intentional, you look crazy. You look crazy at this point. You got to show love all across the board and pay attention. Be more aware of just, like you said, intention.

What are some of your personal favorite Black-owned brands that you’ve chosen to support lately?

Definitely the hair companies like Miss Jessie’s and SheaMoisture. I’ve been wearing my curls a lot more. Pat McGrath is probably my favorite, but I’ve always supported some of my favorite Black designers. I work with somebody named Brie Stenson. She’s amazing and she’s designed a lot of the custom pieces that I’ve worn to perform in.

Speaking of style, we’ve been able to see a little bit more of you than when you first came on the scene, whether it’s been you rocking lighter shaded glasses or experimenting more with your style. How do you feel about slowly revealing more of yourself to fans this year?

It’s been organic, I think, especially because of quarantine. I’ve let people into my space as far as just doing acoustic records. And in the beginning, the goal was to make the focus on the music, and I didn’t want people to know what I look like or, “Oh, she’s pretty,” or, “She wears this,” or, “She dates so-and-so,” or, “She is eating this today.” I didn’t want any of those things to come before the music, which, with social media, we tend to do that. We listen with our eyes, and the goal was to have the music be the forefront.

So I think I’ve done that, and I’m really proud that the music is most important with me. I think everybody knows that in my live shows and my performances and the way that I present my music and myself, it’s all about the music. That’s what drives everything that is me. And at this point, I feel like I’ve done that. Revealing more of me is just uncovering more layers, and people being able to feel just connected to me in a deeper way, and connected to me more where you see my eyes a little bit and whatever I’m wearing is more the attention. It’s becoming just more open, and it’s a different kind of connection.

Since you aren’t able to have your usual audiences, how have you stayed connected to your fans lately?

Thankfully, I’ve still been able to do certain things and perform. I’ve done a lot of interviews and a lot of performances. I started a series called Girls with Guitars on Instagram Live, which was so cool, because I just wanted to jam out with some girls that play guitar. And I know there’s a lot out there that we don’t even know about or see, and it became this platform for those up-and-coming girls with guitars, and we would jam. We would sing songs together. They would show me their music, and people really looked forward to that every week. I had people like Sheryl Crow on there, Lianne La Havas—it was so many people—Willow Smith. It just became this really dope community of girls who play guitar.

So that was one thing that I did. There’s been a lot going on. I’m still keeping up with releasing my glasses. I’m dropping some glasses next week. Some new glasses and the guitar came out with Fender. I was the first Black woman to do a collab with Fender. So any way I can represent and touch the people and give the people something, I’ve tried to take those opportunities and do it. Do it big.

We’ve gotten a taste of some of your new music this year, but you’re still working. I’d love to know what’s on the horizon musically for you. Can fans expect anything come 2021?

Definitely. I have a few things going on, but I’m still finishing up my album. It’s very close. Yesterday, I was in the studio just going through all the song titles and narrowing everything down and figuring out what I want it to be. Yeah, it’ll be here soon.

We’re heading into the holidays, which are going to look a lot different for a lot of people this year. How are you harvesting joy for the season, even though we’re still really going through it as a country?

I think throughout the year, we’ve all seen what’s most important, and it’s not material things. It’s people we love. And so I think lately, I’ve just been taking even more time to tell the people I love that I love them, because we forget. We just assume, “Oh, they know. They know what it is.” But sometimes, you got to just say it. I think it just starts with that.

Just calling people like, “Hey, checking on you. Love you.” That’s what brings me joy, letting people know that I love them and letting them know that I got them and they got me. It’s no better feeling than being surrounded by people you love. So, life is short. I think we realized that this year. Life is way too short.

This interview was edited and condensed for clarity.