Home » Music » From 'Blowin' in the Wind' to 'I Can't Breathe': Protest Songs Spotlighted in Revamped Exhibit

About a week after he watched footage of George Floyd’s death, seasoned Chicago bluesman Dave Specter did something he’d never done before — he wrote a topical song. “It was such a strange time,” he recalls. “Things were in a very dark place. The music business was shut down, and it was hard to get inspired. But I was struck by that video and I was reading about George Floyd, and I started writing about it. It was all-new territory for me.”

Within weeks, Specter had finished a blues he called “The Ballad of George Floyd” and decided to record it. Thanks to the pandemic, he and his three colleagues — including duet partner and Chicago blues-harp legend Billy Branch — had to record their parts at separate sessions at a studio in Evanston. The lack of a rhythm section lent the final version a slow, mournful quality. “I was not comfortable bringing a full band into the studio,” Specter says. “And I thought a really sparse sound would work for the song.”

H.E.R. Drops Powerful New Video for 'Judas and the Black Messiah' Song 'Fight for You'

Derek Chauvin's Trial for the Murder of George Floyd Begins

The 50 Greatest Rock Memoirs of All Time

In roughly the year since Floyd’s death — with the trial of police officer Derek Chauvin continuing this week — a slew of songs about Floyd have been released, many in hip-hop. But next month, Specter’s “The Ballad of George Floyd” will be elevated to another level when it’s included in “Songs of Conscience, Sounds of Freedom,” a new exhibit on the history of protest songs set to open May 21st at the Woody Guthrie Center in Tulsa, Oklahoma.

Originally displayed at the Grammy Museum in L.A. in 2009, where it focused largely on songs emerging from the civil rights movement and wars in Iraq and Afghanistan, the upgraded exhibit still pays homage to the originators of socially conscious tunes. It includes handwritten lyrics from Bob Dylan (“Blowin’ in the Wind,” “The Times They Are a-Changin’”) and Bruce Springsteen (“American Skin [41 Shots]”); guitars played by Guthrie, Steven Van Zandt (whose 1985 Artists United Against Apartheid track “Sun City” is also honored), Tom Morello, and Sixties folk icon Tom Paxton; and Pete Seeger’s banjo. On display will also be artifacts from the late topical singer Phil Ochs — including the tombstone he built for the cover of his 1969 album Rehearsals for Retirement. For anyone who ever wondered if that marker (which included a fictional death date of 1968) was real, the exhibit answers the question. “I guarantee you it’s a real tombstone,” says Guthrie Center executive director Deana McCloud. “It takes about four people to move it.” 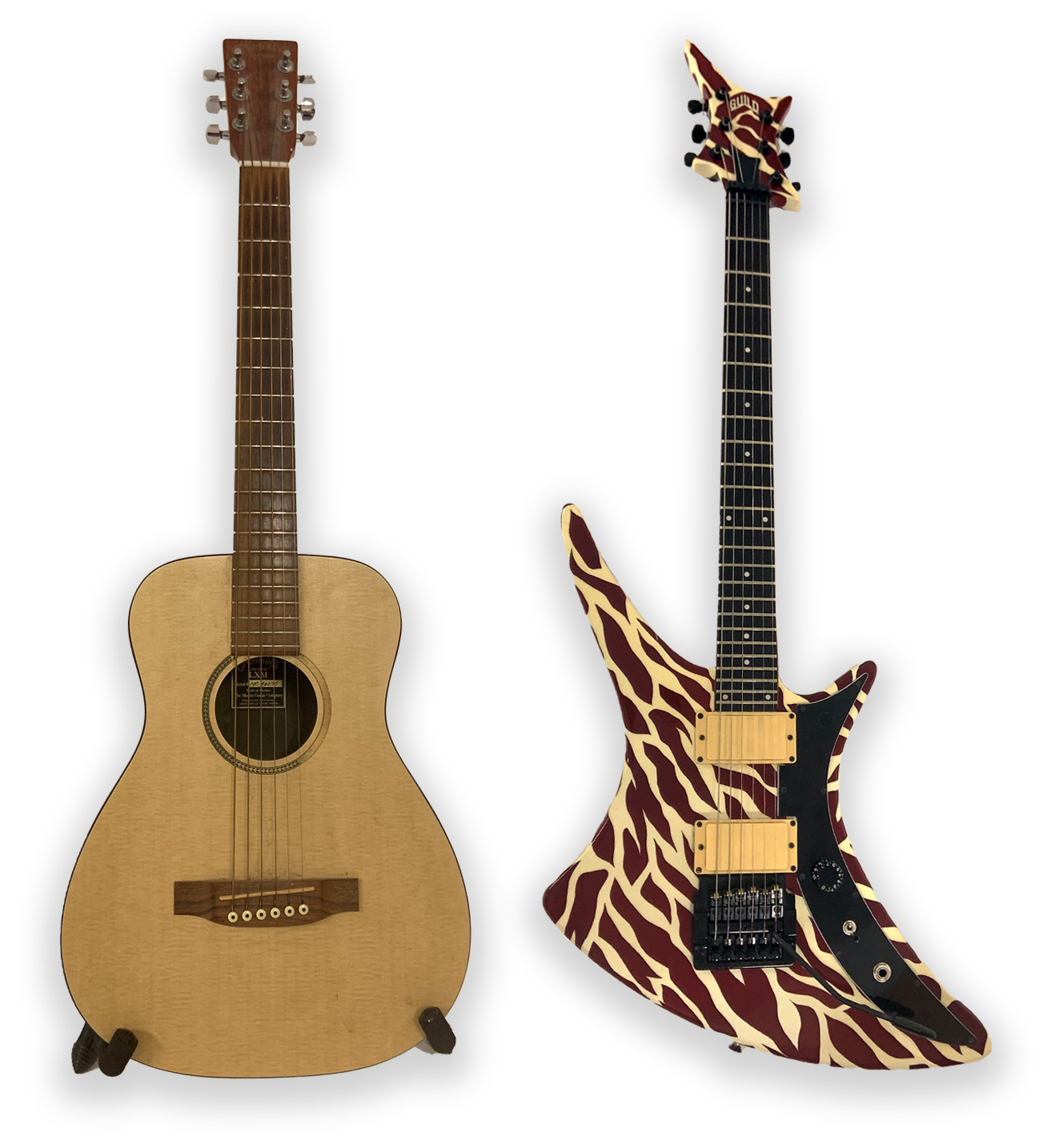 Courtesy of the GRAMMY Museum

The stories behind certain songs are also included: Peter, Paul, and Mary’s Noel Stookey is heard talking about recording the group’s hit rendition of “Blowin’ in the Wind,” for instance. Museumgoers will also see notebooks from Guthrie’s radio days in Los Angeles in the Thirties. As McCloud says, “It’s the notes he would write to himself about what he needed to say, the things he needed to address, the people he was speaking for, and the lyrics of the songs he was going to sing.”

But the exhibit has also been overhauled and expanded to reflect events since the now long-ago first year of the Obama presidency. “When Black Lives Matter was just exploding and all these new songs were coming out, like H.E.R.’s ‘I Can’t Breathe’ and Mickey Guyton’s ‘Black Like Me,’ someone suggested to me that we should bring the exhibit back,” says Grammy Museum executive director Bob Santelli, who suggested the exhibit be given what he calls “a contemporary edge.”

As a result, about 80 percent of “Songs of Conscience … ” is brand new — and places a marked emphasis on recent events and songs, such as Specter’s Floyd song. Specter contributed handwritten lyrics to that song, as did H.E.R. for “I Can’t Breathe”; she also donated the acoustic guitar on which the song was written and an interview about it. Kendrick Lamar’s “Alright,” the To Pimp a Butterfly track that became a BLM anthem, is also featured, along with Guyton’s “Black Like Me” (and the outfit she wrote performing the song at the Grammys). Chuck D is donating items from the Public Enemy archives, including handwritten lyrics of his own. The inclusion of Specter’s song, says Santelli, is the exhibit’s way of including blues protest songs.

The opening of the exhibit is also timed to coincide with the 100-year anniversary of the Tulsa Race Massacre in May 1921, a horrifying moment of racial violence in which a white mob attacked residents and homes in Greenwood, a well-heeled black neighborhood of Tulsa also known as Black Wall Street. In the end, hundreds were killed and 1,500 homes were destroyed. The exhibit (in a museum minutes way from that neighborhood) will include songs from Fire in Little Africa, a new album in which Oklahoma hip-hop artists address the events of that time and their repercussions. 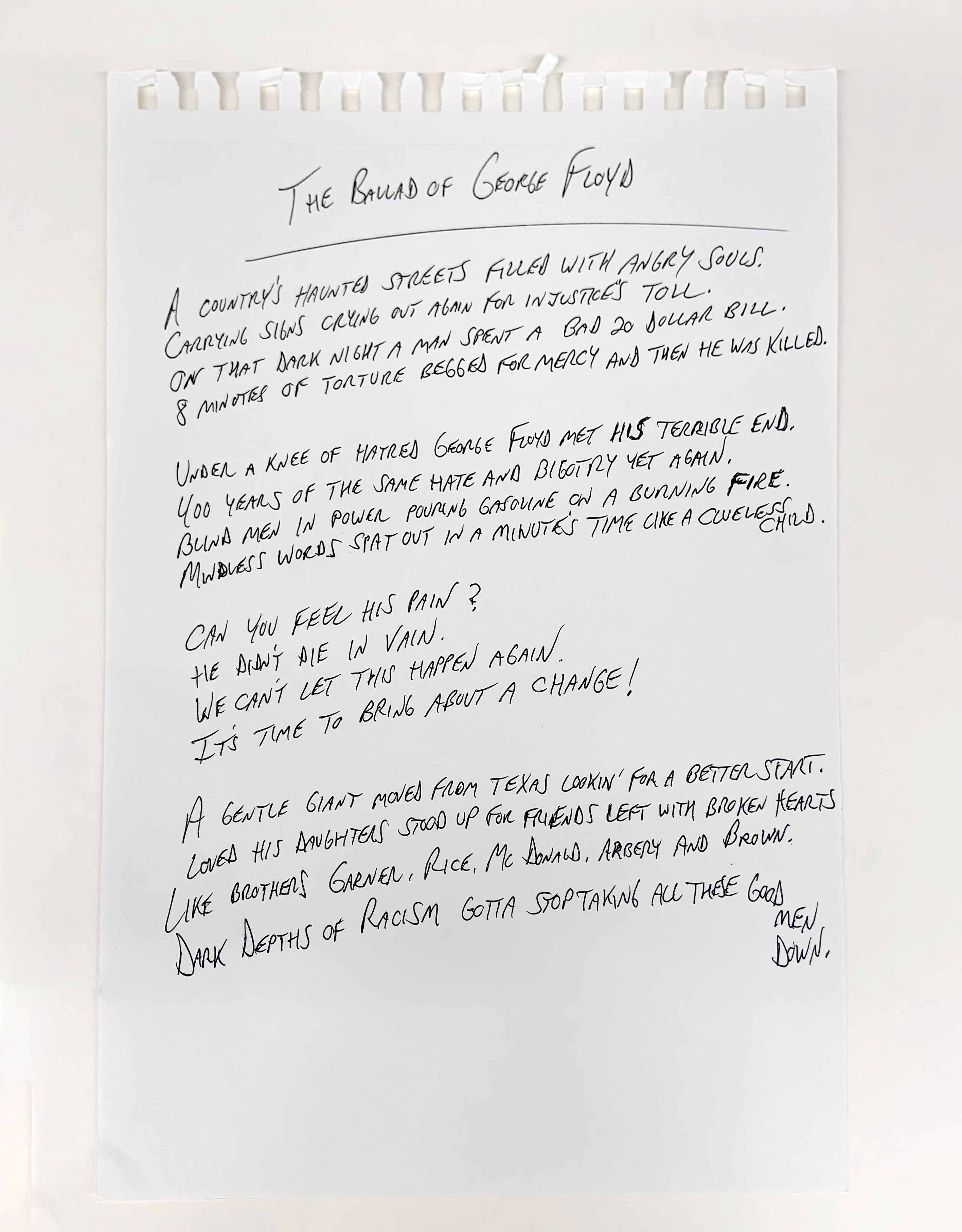 Courtesy of the GRAMMY Museum

Coincidentally, “Songs of Conscience …” also opens just after a recent mini-controversy over Guthrie’s “This Land Is Your Land,” part of the museum’s collection. In a recent article, NPR said the song presented a “wholly colonialist message” that was insensitive to Native Americans. “We are located in the heart of Native American land,” McCloud says of the Guthrie Center. “This is where so many tribes were relocated after the first removal. So we absolutely understand the sensitivity around ‘This Land Is Your Land’ and respect those ideas and feelings — while also realizing that Woody was not writing the song about appropriation or owning the land. He was writing an observation piece about people he saw and the way we should be treating each other. So we make sure that the intent of ‘This Land Is Your Land’ is shared and that we’re respectful of addressing those concerns in the collection.”

To accomplish that, the exhibit (which runs through October) also includes new verses Pete Seeger wrote for the song after Native Americans had complained to him about it years ago. During research for his book This Land Is Your Land: Woody Guthrie and the Journey of an American Folk Song, Santelli was able to ask Seeger about the controversy. “Pete was embarrassed and taken aback by [their concerns],” says Santelli, “and he said, ‘You’re absolutely right, but here’s what Woody told me — this song is for everyone, so change the lyrics and make the song your own.’”

After Nearly 30 Years, X Return With 'Alphabetland,' an Album That Lives Up to Their Hype