In a white blazer, her hair falling over her face and the stage flooded in blue, Emma Louise has an ethereal presence. 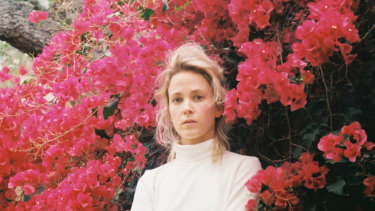 Her band just hopped off a plane from LA, but you wouldn’t be able to tell.

She wryly admits that she made her guitar strap out of gaffer tape, but that it keeps getting stuck in her hair and that she'd have a few extra at the merch table if anyone wanted one.

Emma rose to attention in 2011 through YouTube, was nominated for Triple J’s Unearthed artist for an album that spawned the hugely successful Jungle, and was then nominated for an ARIA for best female artist for her album Vs Head Vs Heart in 2013.

Now with her third album release, Lilac Everything: A project by Emma Louise, the Byron Bay local wants to make space for more creativity.

She announced mid-set that while she was "grateful" for what Jungle had allowed her to achieve, that set at the Corner Hotel was likely to be the last time she ever played the popular song live.

"I've had an interesting relationship with this next song," she said.

"It gave me freedom to be creative with what I want, but I also find it challenging."

She switches between the keyboards and her guitar, and on occasion moves to the front of the stage, the lights creating an almost otherworldly silhouette.

The performance is magnificently tight and peppered with Emma's genuineness, at one point jokingly calling herself a "shithead".

She performs songs from her three albums, including Nothing Can Tear Us Apart, Wish You Well and Shadowman, the pattering Gentleman, a moving solo of God Between Us and West End Kids, which has the crowd bopping along.

Her song Two Bodies, which she wrote with Australian producers Flight Facilities, and Underflow were highlights. But her stripped down solos, with her deep vocals moving like molasses through the crowd, make Emma Louise a rare and unique talent.