“It’s a beautiful privilege to have another show in Vegas,” Dion tells Rolling Stone of her newest residency. The singer is a Vegas veteran, having headlined A New Day… from 2003 to 2007 then returning for Celine in 2011. Both took place at Caesars Palace, with the latter wrapping in 2019 after eight years. “For me, it’s impressive! Years back, I was supposed to be here for three months and now here I am!”

Dion kicks off The Theatre at Resorts World Casino — a 5,000-seat theater inside the massive luxury destination — on November 5th, making way then for three new faces on the Strip. Perry, Underwood and Bryan have all been in talks with promoters and venues for years to plan their own residencies.

Chasteness, Soda Pop, and Show Tunes: The Lost Story of the Young Americans and the Choircore Movement

“I’ve always been interested in the idea of a residency at some point and when this opportunity came up, to be a part of something all-new from the ground level, I was so excited to get involved,” Underwood says of Reflection, which will open on December 1st.

“Vegas is in my blood,” Perry explains of her lifelong connection to the city. Her grandmother was a seamstress for showgirls, so Perry and her family would visit her and stay at Excalibur several times a year. Her late aunt was a topless showgirl who later became an ordained minister. Like Dion, she’s seen how much the city, its visitors and the entertainment circuit that fuels it have changed over the years.

“Ten years ago, Vegas was a different story. They’ve been doing revamping and remodeling during this downtime [over the last year] to focus on what people want, what the next generation wants.”

As Perry puts it, the focus is less on gambling and more on “experiences,” which all the performers are hoping to achieve. For Katy Perry: Play, which launches on New Year’s Eve, the pop star has returned to her signature black hair for the poster and wants to appeal to a more general audience than the hardcore fans she knows she would see on tour. “When we had a meeting the other day, I was like ‘Okay guys, tell me my top 20 Spotify songs,’” Perry says. “That’s my set list.”

Perry’s American Idol co-judge Luke Bryan is still in the early planning stages of his show, but is similarly focused on high-energy, party-friendly fun. “I can say that it will be different from the shows the fans will see on the road,” he says. His initial six-show run will begin on February 11th. “We want the Vegas show to be unique to that room and want them to leave saying, ‘Wow, I need to catch him on tour.’ Just like we want the fans on tour to leave those concerts saying, ‘I really want to see his Vegas show.’”

Dion appreciates that she is continuously pulled back into the Vegas fold. For her, it not only provides the ideal stability for her family but also makes for a great fan experience.  “If I put myself in the fans’ shoes, they get to travel. They’ve been preparing for months and get to take the plane or a car and get a hotel room. It’s a whole-day thing; it’s not just a concert.”

Tickets for all the shows will go on sale May 24th at 10am PST, with Resorts World opening on June 24th. Zedd and Tiesto will have their own residencies at the AYU Dayclub, an outdoor, poolside venue where both day and nighttime events will be hosted initially over the summer. 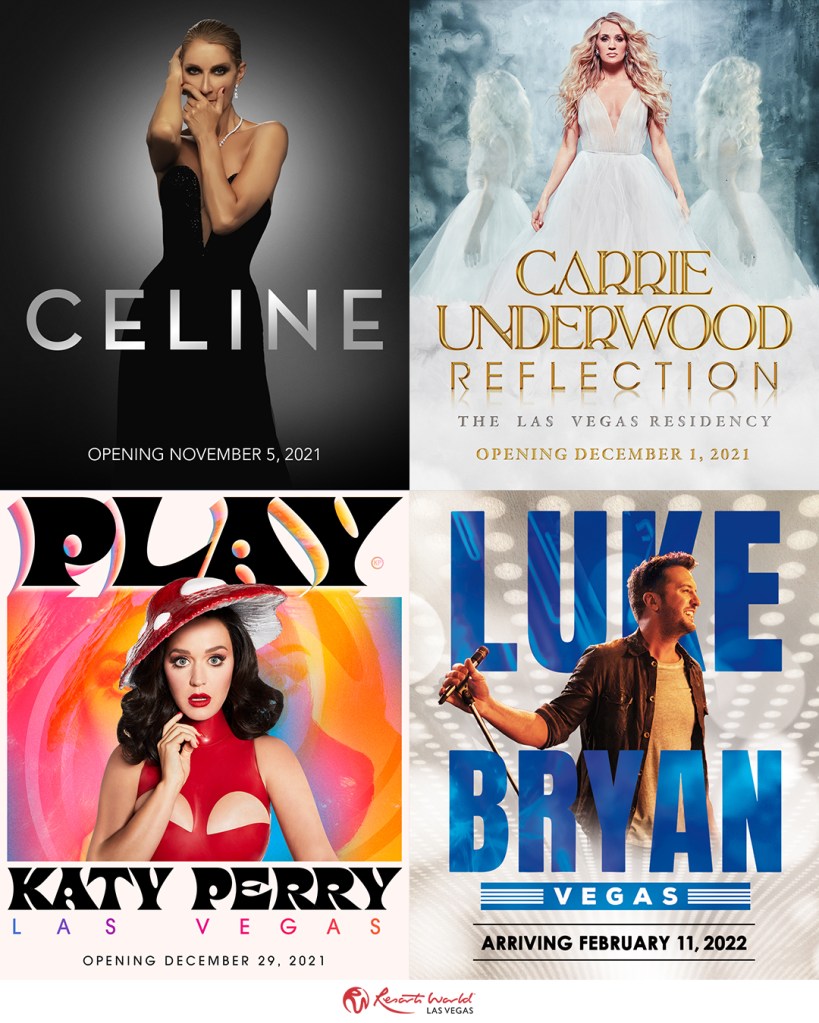