Tell someone you're attending a Billy Ocean concert, and you'll usually get a double-take. "What, he's not kicking back with his Caribbean queen on an island he bought with his royalties?"  Then, a broad smile.

Which is precisely the reactions one had when the 69-year-old Londoner, sporting a Merino-like mega-dreadlock behind his head, shimmied on to this sold-out theatre's stage. 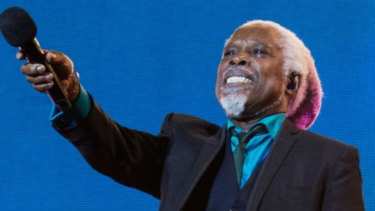 A pristine white suit completed the eyebrow-raising appearance, but the joy came as soon as the man born Leslie Charles in Trinidad & Tobago sang the first line of his disco hit from 1979, Are You Ready.

The four decades since its recording have done absolutely nothing to Ocean's soaring tenor, to the point that it was surreal. Few bodies of work are imprinted on the collective conscience like Ocean's chart-topping run of 1970s and 1980s singles, and here was the voice behind them – here, in suburban Sydney in 2019 – delivering them in note-perfect style.

The strength of Ocean's voice, and the reservoir of goodwill we held for him, were such that he could follow the funky opener with a couple of dated keyboard-driven groove tracks from a flop 1993 album, and still hold our attention.

There were more out of their seats for the bass-popping Nights (Feel Like Getting Down), and much swaying to Love Zone, Ocean's croon smooth as silk, before the Motown piano intro of 1976 smash Love Really Hurts Without You sent the place bananas.

Constantly crossing the stage with his charming sexagenarian's moonwalk, Ocean drew out his breakthrough hit with a blistering call-and-response coda, transforming this hitherto slick show into an old-fashioned soul revue.

We detoured into easy listening territory with Suddenly and Colour Of Love, mellifluous saxophone lifting perhaps the prettiest melody Ocean ever sung. Then his rootsy influences, obscured on the hits, shone on superb covers of Bob Marley's No Woman No Cry, and one few others could get away with in Sam Cooke's Change Is Gonna Come.

A coming album of new material was mentioned but, unsurprisingly, the home straight of this show was nothing but those hits. They generally lived up to expectations.

Ocean must have sung Lover Boy a thousand times by now but there was still a sense of wicked joy in his teasing the middle-aged women huddled at his feet with its chorus.

Then the way his vocal wove between his three backing singers, including daughter Cherie, on Get Outta My Dreams, Get Into My Car ensured a song we've all heard a thousand times before sounded fresh.

It was a shame he left us to sing the opening couplet of When The Going Gets Tough – his most memorable lyrics – but his improvisations throughout, and the way he dropped a knee and tore into the bit about "your love's like a slow train coming", made up for it. (Factoid: that famous bassline was played on a keyboard this night.)

With the crowd whooping and Carribean Queen still unheard, a non-suspenseful two minutes followed before the band returned to play Ocean's signature song. Slap bass, horn flourishes and Ocean's vocal – still emotionally engaged even as he high-fived everyone in the front row – ended this 90-minute show on a high, and we were left to contemplate that this really just happened.

The soundtrack to the 1980s – and probably your next supermarket shop – had come to life.

How Many Grammys Does Doja Cat Have?

‘You have to be confident’: Eliott finds her voice on a bigger stage