Home » Music » Babyface Is Getting Divorced. Here’s What We Know

R&B crooner Kenny “Babyface” Edmonds is getting divorced from his wife, Nicole Pantenburg, after seven years of marriage. The “Every Time I Close My Eyes” singer and his now-ex share a 12-year-old daughter named Peyton. According to the Daily Mail, the couple first got together in 2007 when Pantenburg was a backup dancer for the singer/songwriter. The two welcomed their daughter the following year but didn’t get married until May 2014, after seven years of dating. Babyface and the former “Moesha” star had a lavish wedding that was attended by other celebrities like Oprah Winfrey and Carole B. Sager.

It was the third marriage for the music legend, who had previously been married to TV personality, Tracey Edmonds, for 13 years between 1992 and 2005. The two share two sons, Brandon and Dylan. Tracey was the one to officially file for divorce from her husband at the time, citing irreconcilable differences. Babyface also had a first wife named Denise, according to Hot New Hip Hop.

Yet, Babyface decided to give love another chance after meeting Pantenburg. Page Six reports that he announced their engagement during a BET interview in 2014 after his close friend and fellow R&B singer Toni Braxton asked him if he would “ever consider getting married again.” To her and his fans’ surprise, Babyface replied, “I’ve already considered it. I’m engaged, so yes.” Sadly it seems the two didn’t survive the “seven-year itch,” but there doesn’t appear to be any bad blood between the former couple. Here’s what we know.

This split appears to be amicable 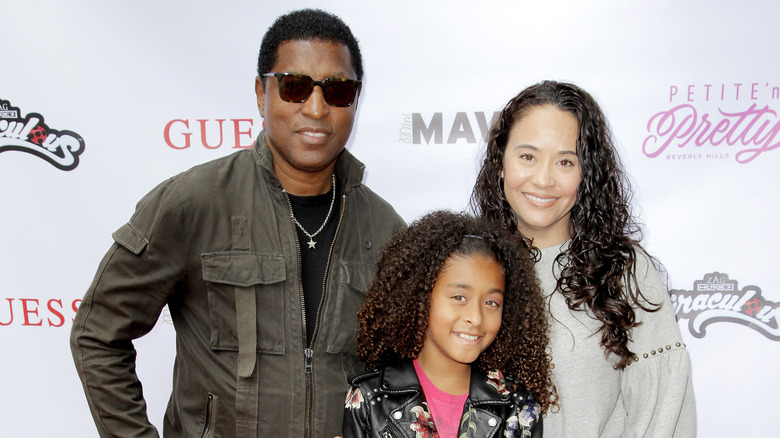 Grammy Award-winning singer Kenny “Babyface” Edmonds’ divorce from his wife Nicole Pantenburg appears to be amicable. The now-former couple announced their split in a joint statement, which focused on the well-being of their 12-year-old daughter. They said (via People), “After much thought and with great sadness, we have decided to end our marriage. We continue to care and have respect for one another and share eternal love for our daughter and her well-being.” They continued to express their desire to keep it drama free by adding, “We ask for personal privacy for ourselves and our daughter as we navigate these new steps as a family.”

Neither Babyface nor Pantenburg has officially filed for divorce or to legally separate at this time, so a reason for the split is still unknown. Outside of their statement, neither has released any further details on their breakup either.

In 2015, Babyface referred to his now-ex as one of the loves of his life. He said in an interview with NPR, “The big love of my life. That’s a hard question because there’s a lot of loves in my life. There’s my wife, Nikki. There’s my daughter and my boys.” He added, “I lost my mom, and when someone that important leaves this world, it leaves you with this feeling of wanting to grab every moment with those that are around you, and appreciate it.” While Babyface’s marriage with Pantenburg didn’t work out in the end, it seems the two remain on good terms.

David Bowie wedding: Where did Bowie and Iman get married?