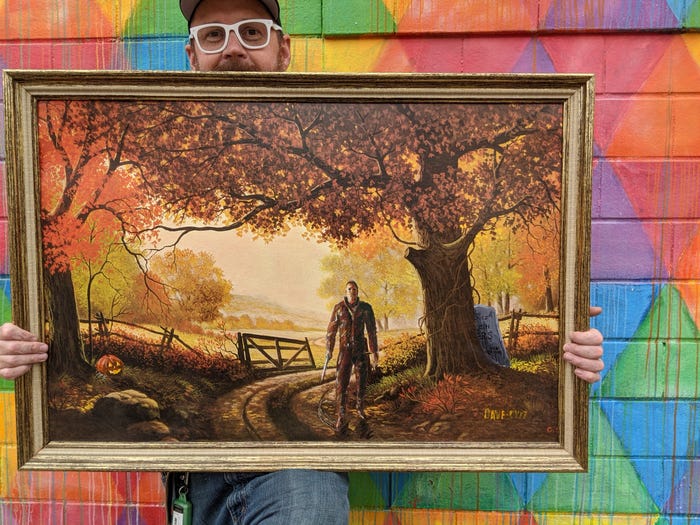 If you're a big "Game of Thrones" fan who has always wanted to own a print of Daenerys' three dragons mid-flight against a picturesque seaside backdrop, an Ohio-based artist and vintage store owner has you covered.

He covers a wide range of fandoms in his work — including horror, science fiction, and Netflix documentaries, among others. Prints of Sherrill's paintings are available on his website and are all priced at $20.

Check out Sherrill's work, and the story behind his art, below.

An Ohio-based artist and vintage shop owner is transforming old paintings people donate, or ones he finds on the street, by adding characters from popular movies and TV shows like "Star Wars" and "Game of Thrones." 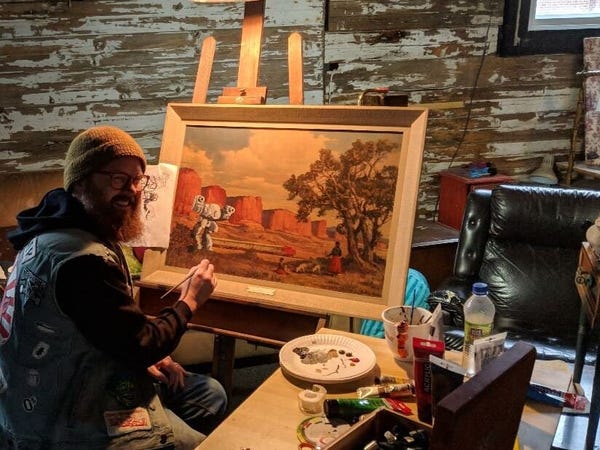 There are currently around 40 completed paintings for sale on the Arrowhead Vintage website. They all feature picturesque landscapes with characters from popular series like "Star Wars," "Game of Thrones," "Lord of the Rings," and even Netflix's "Tiger King" on them.

David Sherrill of Arrowhead Vintage in Canton told Insider he has been making art for several decades. He started adding popular characters to landscape paintings about five years ago. 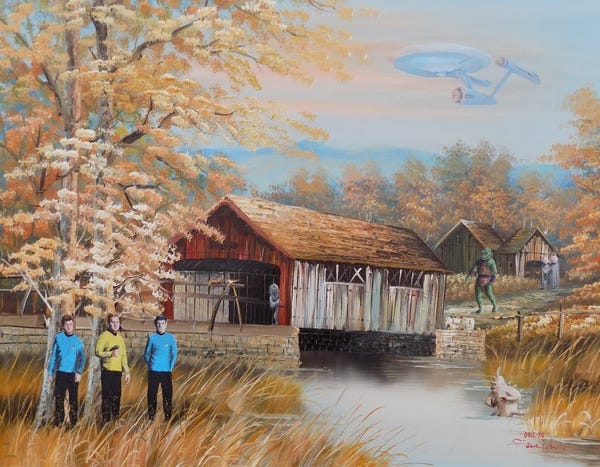 Sherill had an old landscape painting at his shop for several years without any luck finding a buyer for it. Over time, he considered possibly tossing it.

He started by adding a few Ewoks to a painting and Sherrill said that sold "relatively quickly." Encouraged by this, he added Godzilla to another painting, which also sold. 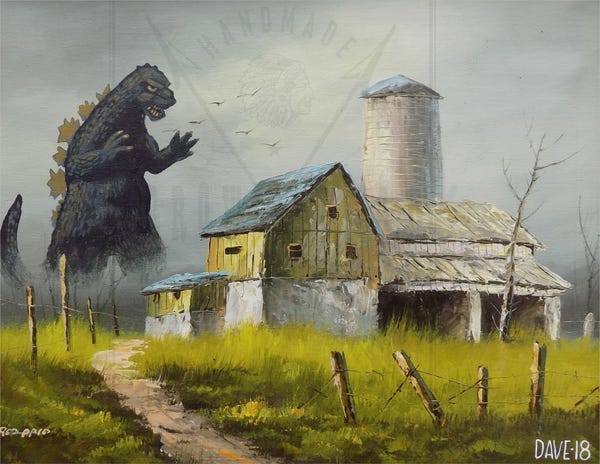 Sherrill started posting his paintings to Reddit a couple of years ago. While he was initially met with mixed reactions, it opened up his work to audiences on a larger scale. 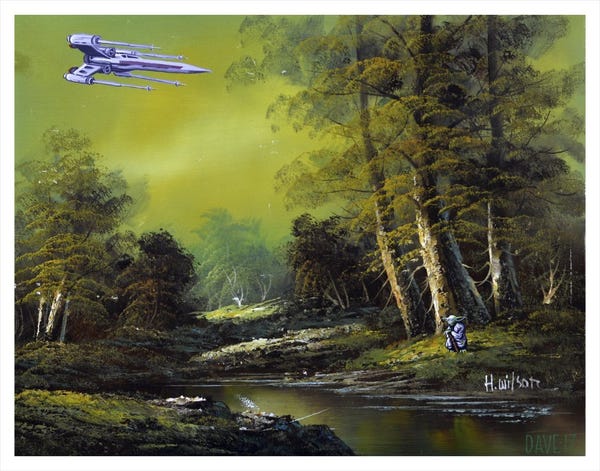 "The response was rough very early on," Sherrill said. "Some people were very offended that I was taking a piece of art which, to some person who created it, might've been a sacred piece of art to them."

He told Insider that he tries his best to be respectful towards the original piece of art.

"Sometimes I repaint the entire thing on a different canvas, just to really get a taste of that artist, the way they were moving their paints, and the way they assembled their art," Sherrill explained.

Initially, he used paintings he found at auctions, thrift stores, and even on street corners. Nowadays, people bring them to him to be altered. 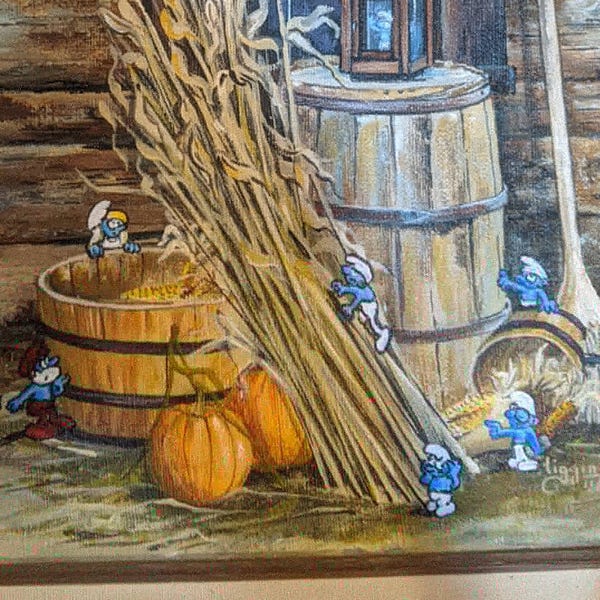 Sherrill recalled one woman who found out about him through a local news segment and then drove over to donate 16 paintings.

"They were in the house that she was cleaning out and it was not something she wanted to throw away — but at the same time, nobody wanted them," he said.

Sherrill told Insider he's returning the favor by making a painting with Smurfs in it, which are her favorite.

He also looks at Facebook Marketplace for paintings he can use. He adds that it's become a rich source since people have been cleaning out their houses because of the pandemic.

Friends and associates also bring him paintings to work with.

Sherrill told Insider that he probably spends more time planning and preparing the paintings than he does actually putting brush to canvas. 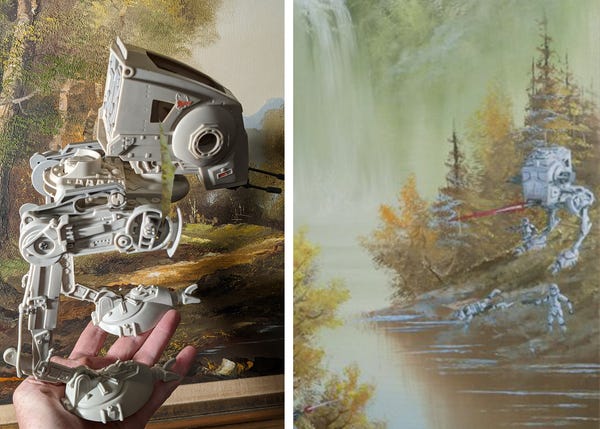 Sherrill has sculpted clay into specific poses he envisions the characters taking in the painting and has even enlisted his friends to dress up and pose for photos he would use as models for his artwork.

Conveniently, he lives next door to a toy store where he can often get models for "Godzilla" or "Star Wars" characters in the form of discarded or discounted toys.

For Sherrill, if a painting doesn't look right, it means it isn't done yet. 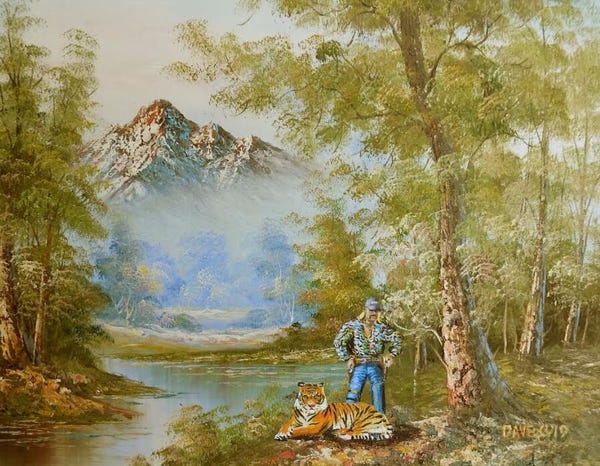 "I used to knock out the paintings in three or four hours and then it was like, 'okay, it's done. I'm going to sell this thing,'" Sherrill told Insider. "Now, it almost becomes a labor of love. I tell myself if it looks bad, it's just not finished yet."

He adds that he often spends several days to finish one painting.

As for trying to decide what character goes on which landscape, Sherrill said he lets the painting do the talking. 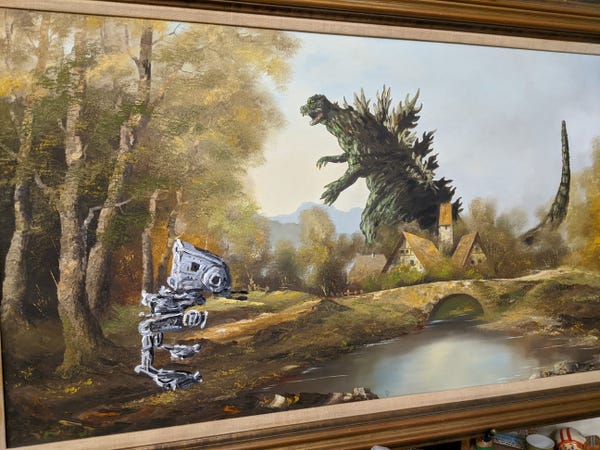 Sherrill said he likes to get a sense of what character would look good against a certain landscape by understanding the vibe and scale of the painting.

He also does commission work for requests his customers make. He told Insider he considers it to be a privilege to be able to turn someone else's vision into something concrete.

"Our movies are just our shared fantasies as a collective species and to get to be involved in someone else's fantasy is just so fun," Sherrill told Insider.

His personal favorite painting is either a "Star Wars" scene against a lighthouse backdrop (pictured below) or another painting where he incorporated Krampus, a demonic figure from European folklore who is a hybrid between a man and a goat. 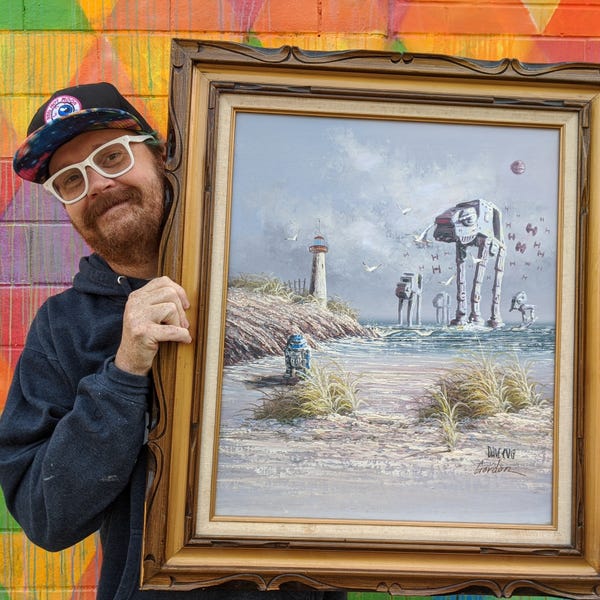 Sherrill, who's a huge fan of the "Star Wars" franchise, says that fandom responds positively to his work.

"The 'Star Wars' fandom is the coolest group of people. They're supportive," he told Insider.

Sherrill wanted to draw Freddy Krueger from "A Nightmare on Elm Street" for a long time but never found the right background for that character. He took some creative liberties recently and finally painted a fun crossover featuring Krueger and another iconic horror villain against a snowy backdrop. 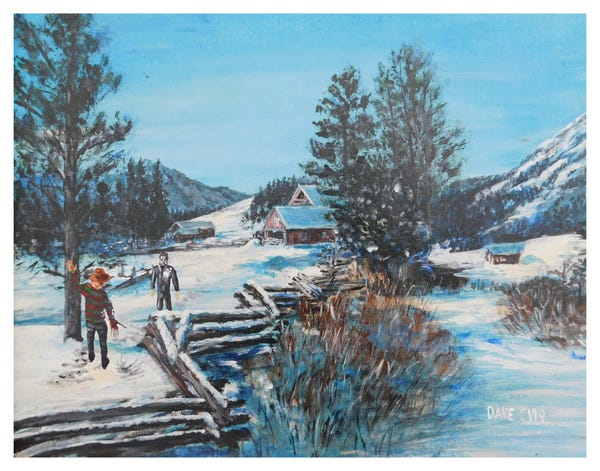 In one of his more recent paintings, Freddy Krueger can be seen engaging in a spirited snowball fight with another iconic horror character — Michael Myers of the "Halloween" franchise.

Sherrill says that he looks at these paintings as a bit of joy he can share with those around him, especially during the pandemic. 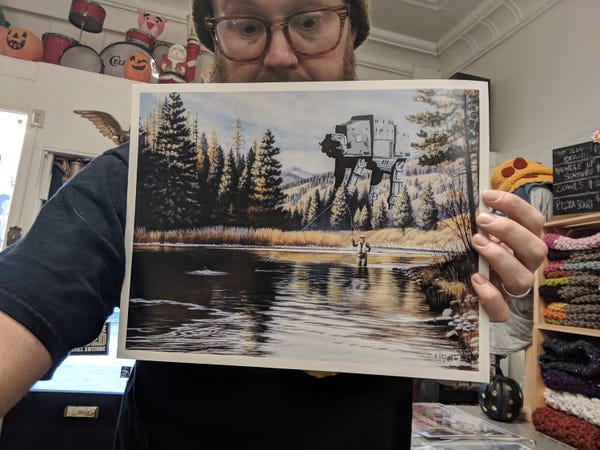 Prints of his paintings, collected under "altered art" on his store's website, cost $20 each.

"Everybody loves having fun. And I know this is not fine art. I know what I'm doing is not the next Rembrandt. So I don't mind doing it at a low price," Sherrill said.

When Does Disney's 'The Lion King' Soundtrack Come Out?