The whimsical animated musical about the Beatles delights me in new ways thanks to daily viewings with my 4-year-old. 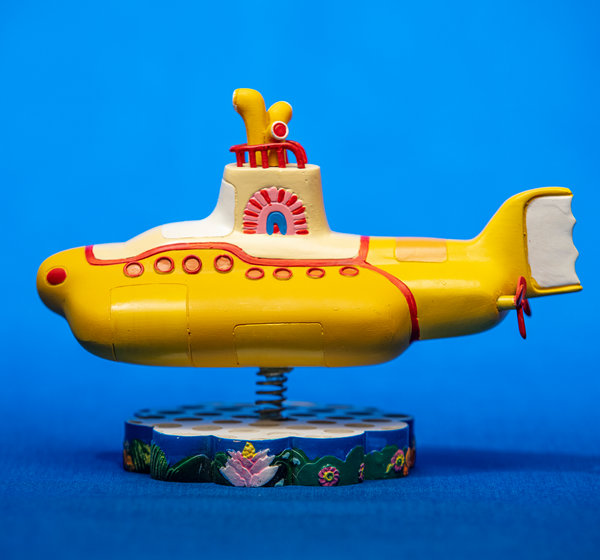 Part of being a parent to a 4-year-old is surrendering yourself to the routines and rituals that govern your child’s day. For my son, Max, that means always letting him be the one who gets to push the elevator button in the morning, and keeping the chicken nuggets from ever making contact with the mac and cheese on his dinner plate. And when he wants some recreational screen time, it means allowing him to see the only thing he’s wanted to watch for the past several months: “Yellow Submarine.”

I can’t quite remember how this 1968 animated musical movie inspired by the Beatles became Max’s go-to viewing material. I don’t know how it overtook TV offerings like “PAW Patrol” or “Thomas & Friends,” so unerringly calibrated for contemporary tots, in his imagination. But now, twice a day, he and I sit on our couch and watch hand-drawn versions of the Fab Four set off in their comically elaborate watercraft, sing their beloved songs and rescue Pepperland from the music-hating Blue Meanies.

I was about 10 when I discovered “Yellow Submarine” for myself, in the throes of an infatuation with classic rock — too young to realize the Beatles’ speaking voices were provided by other actors, and at an age when I thought the movie’s pun-filled dialogue was the height of comedy. (Told not to throw a potentially dangerous switch, Ringo, voiced by Paul Angelis, replies in his Scouse accent, “Can’t help it — I’m a born lever-puller.”) It later became an entry in my DVD library, when keeping a DVD library was still a modern thing to do.

Max is too young to enjoy the arch wordplay of “Yellow Submarine,” its layers of pop-cultural reference and self-reference. (Someday Max will appreciate the joke where John Lennon, voiced by John Clive, says that the Sea of Holes reminds him of Blackburn, Lancashire, and Geoffrey Hughes’ Paul McCartney sings to him in reply, “Oh, boy.”) But there is still plenty for a viewer his age to savor. More than enough has been said already about how the music of the Beatles — simple, joyful, repetitive — could have been engineered in a lab to burrow into a child’s mind. But something special happens when these songs are played alongside the animated sequences in the movie to make them that much more memorable.

Lennon singing about “a real nowhere man, sitting in his nowhere land” may be an abstract idea to a preschooler, but illustrate that with the cartoon of a funny, furry beast called the Nowhere Man, spinning on concentric circles in a realm of empty space, and it suddenly makes sense. And what developing mind can resist the sequence in “When I’m Sixty-Four” where ornate renderings of the numbers from 0 to 64 are counted on the screen?It’s what you’d get if “Sesame Street” were much more transparent about its mind-altering influences.

These are all observations that can be gleaned after just a couple of viewings; then there’s the version of “Yellow Submarine” that reveals itself after you’ve slipped beyond the event horizon and watched it dozens of times.

To me, the film is endlessly intricate, like an illuminated manuscript or a really good “Simpsons” episode. With every viewing I seem to find a new sight gag, a pun or a clever line reading that I hadn’t picked up on before. (It took me a good 33 years to understand why, in a scene where the Beatles are trying to sneak into the Blue Meanies’ battle corps, a suspicious soldier would ask them, “Are you bluish? You don’t look bluish.”)

To Max, it’s a malleable collection of smaller narratives: In one 10-minute span, it’s a madcap romp through a boardinghouse of undefined dimensions, populated by wild creatures; in another, it’s an action movie where, in a daring overnight raid, the Beatles recover stolen musical instruments from a bandstand surrounded by sleeping Blue Meanies. Every genre and type of story that my son can imagine seems to be contained within its generous boundaries.

And when we watch together, the movie becomes a lightning-round test of whether I can explain to Max all the sights and sounds that he doesn’t quite understand: Why do the rank-and-file Blue Meanies all wear caps that look conspicuously like Mickey Mouse ears? Why do the psychedelic denizens of Pepperland turn silent and gray when the Meanies attack them and take their music away? What is George Harrison’s moody “Only a Northern Song” about? What’s an oscilloscope?

By their very nature, the Beatles already appeal to a child’s affinity for groups and teams with distinctly defined members, and “Yellow Submarine” amplifies this effect by flattening out the foursome and reducing them to just a couple of key personality traits: Ringo is forlorn and goofy; John is intellectual and wry; Paul is vainglorious and charming; George (Peter Batten) is mystical and arcane.

For a while, Max seemed to comprehend the band members only as cartoons; once, when he saw photographs of their mop-topped noggins on the cover of “A Hard Day’s Night,” he didn’t show even a glimmer of recognition, as if they were entirely different entities. He’s only recently started to understand that the Beatles were real, live people who played music together, and that he can still see Starr or McCartney do it. (He hasn’t asked yet why he can’t see Lennon or Harrison, and I hope it’s a while before I have to explain it to him.)

There’s one more aspect of “Yellow Submarine” that I never really appreciated until I started watching it with my son. At the end of the movie, after the Blue Meanies have been subdued by a rousing performance of “All You Need Is Love” and are sent running for the hills, the Beatles extend them an olive branch. The Meanies are invited to join their one-time enemies, and they, the Beatles and the people of Pepperland celebrate by singing “It’s All Too Much.” Even if it’s only in a cartoon, it’s heartening to think there are places where conflict eventually gives way to healing and reconciliation. I hope this point doesn’t feel quaint to Max by the time he is old enough to understand it.

Dave Itzkoff is a culture reporter whose latest book, “Robin,” a biography of Robin Williams, was published in May. @ditzkoff