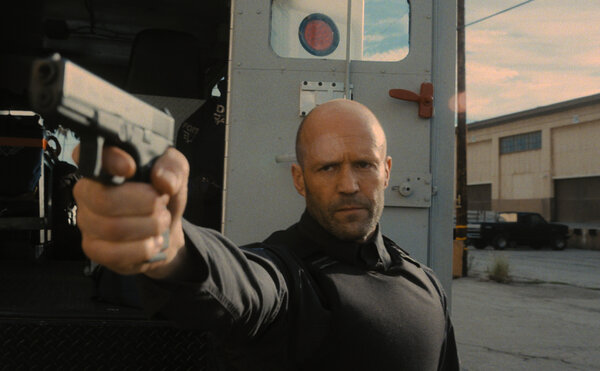 The filmmaker Guy Ritchie has long shown an eagerness to take a whack at almost any blockbuster format a given studio is willing to offer him. Witness the noisome “Sherlock Holmes” period pictures he’s made with Robert Downey Jr., or his more recent live-action consideration of Disney’s “Aladdin.” But his most enjoyable movies remain the tough, nasty crime thrillers with which he kicked off his career back in 1999 with “Lock, Stock and Two Smoking Barrels.”

His new “Wrath of Man” is such an item, although it’s more somber and less rollicking than the likes of “Lock.” It’s also a remake, of the 2004 French film “Le Convoyeur.” Ritchie fares better here with secondhand material than he did with “Aladdin,” not to mention “Swept Away” (2002).

Jason Statham plays Hill, a mysterious, taciturn tough guy who takes a job at an armored car company that recently was hit by murderous robbers. His trainer, called Bullet, shortens Hill’s name to “H.” “Like the bomb,” Bullet explains to a co-worker.

H proves his mettle by single-handedly putting down a truck hijacking, during which, in an inordinately satisfying moment, he takes out a punk played by the pop musician Post Malone. H’s co-workers hail him as a hero, but other characters wonder who exactly this guy is, and what he’s doing at this job.

As Kirk Douglas in “The Fury” and Liam Neeson in “Taken” have shown, there are certain men with whose family one ought not to mess with. Here Statham is one of them. The gravity of H’s true mission accounts for the movie’s tone. Ritchie reveals crucial story points with clever time-juggling editing, and keeps up the tension well into the movie’s climax, which delivers exactly what the viewer will have come to hope for.

Wrath of Man
Rated R for violence and language. Running time: 1 hour 58 minutes. In theaters. Please consult the guidelines outlined by the Centers for Disease Control and Prevention before watching movies inside theaters.