In a trailer for “Wonder Woman 1984,” the title hero is clad in golden armor. That image had fans’ pulses racing because in comic books, the metallic suit is what the heroine dons for major battles. Wonder Woman, who was introduced in 1941, is part of DC’s Holy Trinity of heroes that includes Superman, who debuted in 1938, and Batman, who premiered in 1939. Like the outfits of her fellow heroes, Wonder Woman’s costume has evolved over time and even occasionally received a complete makeover. Here are some notable looks from the Amazing Amazon over the years. 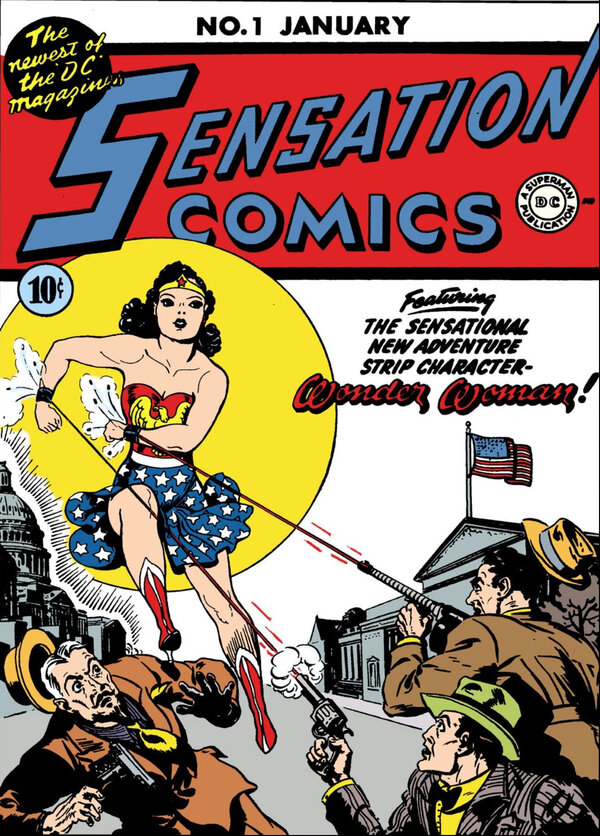 The very first image of Wonder Woman (who debuted in All-Star Comics before starring in Sensation and then her self-titled series) shows her in her original costume, with a golden eagle emblem on her chest and a flowing, star-spangled skirt. Diana — as Wonder Woman is known on Paradise Island, the home of her Amazon sisters — takes part in a competition to return the marooned pilot Steve Trevor to America. Spoilers: She wins! And she’s given the costume as designed by her mother, Queen Hippolyta. The outfit has changed over the years. Her skirt got shorter until it resembled the bottom half of a bikini. She also sometimes eschewed red boots for red sandals, which were secured by straps leading up to the knees.

In 1968, during a visit to Paradise Island, Wonder Woman learns that her sisters are leaving for another dimension. Diana stays behind and performs the “awesome Amazon rite of renunciation,” forsaking her powers. She returns to Earth, goes mod and, under the tutelage of her blind mentor, I-Ching, learns martial arts in order to continue her fight for justice. This status quo lasted until 1972. It was overturned thanks in part to an intervention by Gloria Steinem, who had protested Wonder Woman’s depowering. Steinem went on to put the heroine, clad in her traditional costume, on the cover of the first issue of Ms. magazine that year.

In the aftermath of an adventure in Washington, D.C., where Wonder Woman was then based, representatives from a new charity approach her. They want the heroine to endorse their organization — the Wonder Woman Foundation — and to consider wearing a new breastplate with a stylized double W. She’s reluctant, but after discussing the idea with her mother, who encourages her to wear it, she comes to a realization: “The cause will make the ‘W’ stand not just for ‘Wonder Woman’ — but for women everywhere.” She dons it and declares: “It doesn’t look half bad, at that. Who knows? It might grow on me.”

A reboot in 1986 led to a retelling of Wonder Woman’s origin and her journey to America. This version of the heroine was younger and somewhat naïve but an even more ferocious warrior. Her revised look equipped her with more armaments, including a battle ax, a shield and a spear. Even her tiara was weaponized and made razor sharp. She once used it to behead Deimos, the Greek god of terror, who was threatening the world.

In 1994, Queen Hippolyta had a vision of Wonder Woman’s death and conducted a new contest for the title. (She also made sure that her daughter lost.) Diana emerged with shorter hair and a uniform that managed to show even more skin thanks to matching black bike shorts and sports bra. By 1995, she had returned to a modified version of her familiar look, with fewer white stars on the bottom half of her costume but a huge tiara and a larger WW emblem that extended to a wider belt. The ’90s were rough for DC’s trinity: Superman died in 1992, Batman had a severe spinal injury in 1993, and Wonder Woman died in 1997. Ah, comics.

Wonder Woman’s golden armor has its roots in “Kingdom Come,” a 1996 story set in a future when new heroes run amok in the absence of Superman. In that tale, Wonder Woman uses the armor after tensions at a prison for out-of-control superpowered beings boils over. The armor was later introduced in her present-day adventures. In a 2001 story, an alien menace named Imperiex sets his sights on Earth. Wonder Woman and Queen Hippolyta answer the call to arms, but only Diana survives — for a time. As comic books have taught fans, nearly every character death is undone, and Hippolyta was later resurrected.

The year 2010 saw Wonder Woman reach issue No. 600 thanks to some creative comic book math that combined three volumes of her series to get to this mostly celebratory issue. “Mostly” because one of this stories revealed that Wonder Woman’s timeline had been altered. In this new reality, Diana had been sent away as a child to escape the destruction of Paradise Island and retained only hazy visions of her life as Wonder Woman. On the bright side, this new world order led to a new uniform — one that completely covered her legs! Other changes: Her red-and-gold gauntlets left a W-shaped impression on those unlucky enough to be struck by them.

In 2011, DC rebooted its entire line. The heroes were presented as younger, which erased several longstanding relationships, and many of them were clad in overly designed, armor-like costumes. Wonder Woman’s new look featured additions to previous uniforms (a choker and matching armband) and subtractions from those looks (goodbye, pants). The color palette was also more subdued: a deeper red breastplate (with muted stars), dark blue shorts and boots, and silver accessories (save for the golden lasso of truth).