Walter Bernstein, whose career as a top film and television screenwriter was derailed by the McCarthy-era blacklist, and who decades later turned that experience into one of his best-known films, “The Front,” died on Saturday morning at his home in Manhattan. He was 101.

His wife, Gloria Loomis, said the cause was pneumonia.

Described in a 2014 Esquire profile as a “human Energizer bunny,” Mr. Bernstein was writing, teaching and generating screenplay ideas well into his 90s. Until recently, he had several projects in various stages of development. He created the BBC mystery mini-series “Hidden” in 2011, and he was an adjunct instructor of dramatic writing at New York University’s Tisch School of the Arts until he retired in 2017. “They’ll carry me off writing,” he told Variety.

Mr. Bernstein’s politics — he called himself a “secular, self-loving Jew of a leftist persuasion” — influenced both his life and his art.

“Fail Safe” (1964), the story of an accidental bombing of Moscow, was a bold rejoinder to the nuclear arms race of the Cold War. “Paris Blues” (1961), which he wrote for the director Martin Ritt, a fellow blacklist victim and frequent collaborator, starred Sidney Poitier and Paul Newman as expatriate American jazz musicians and delivered pointed commentary on racial intolerance. “The Molly Maguires” (1970), also directed by Mr. Ritt, concerned union-busting in the coal mines of 19th-century Pennsylvania, mirroring the social upheavals of the late 1960s and ’70s. 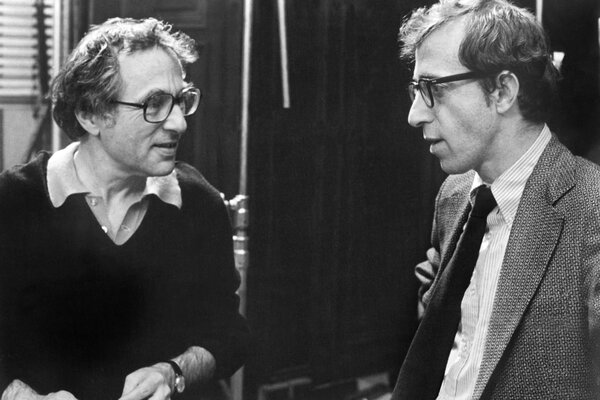 The subject of “The Front” (1976), also directed by Mr. Ritt and the only film for which Mr. Bernstein received an Academy Award nomination (it was also nominated for a Writers Guild of America award), was the blacklist itself: Woody Allen starred as a “front,” a stand-in for a writer who, like Mr. Bernstein, had been blacklisted. (Mr. Bernstein made a cameo appearance for Mr. Allen that same year in “Annie Hall.”)

Not all Mr. Bernstein’s subjects were political. The football-themed “Semi-Tough,” starring Burt Reynolds, Jill Clayburgh and Kris Kristofferson and based on a novel by Dan Jenkins, lampooned the New Age spirituality of such ’70s movements as EST; “Yanks,” starring Richard Gere and Vanessa Redgrave, explored the romantic entanglements and cultural differences between American troops and local Englishwomen during World War II. Mr. Bernstein’s lone feature film as a director was a comedy, “Little Miss Marker,” a 1980 version of the oft-filmed Damon Runyon story that starred Walter Matthau and Julie Andrews.

Mr. Bernstein was born in Brooklyn on Aug. 20, 1919, to Louis and Hannah (Bistrong) Bernstein, Eastern European immigrants who were “not really affected by the Depression,” as Mr. Bernstein recalled in his autobiography, “Inside Out” (1996), because his father, a schoolteacher, was protected by civil service employment rules. He attended Erasmus High School in Flatbush, which was so crowded the students were split into three shifts, a boon for the film-loving Walter: When he was on the 6:30-to-noon shift, he could catch matinees next door at the Astor Theater, where admission during the day was a dime.

Upon graduation, Mr. Bernstein was offered what he called a “wild, dubious” gift from his father: six months of an intensive language course at the University of Grenoble. His father knew a French family Walter could stay with and “had aspirations for me I did not share,” Mr. Bernstein recalled, adding, “If I had a choice of where to go for six months it would have been Hollywood.”

But the experience broadened him, thrusting him as it did into the midst of young intellectuals, often Communists, living on a continent where Hitler, war and Marxism were the currency of conversation.

He then attended Dartmouth College, where he became the film critic of The Daily Dartmouth, a job that came with a pass for the local cinema. “The only catch,” Mr. Bernstein recalled in “Inside Out,” “was that there were no screenings or previews, so you had to write the review before seeing the movie.”

“I found this no real impediment,” he added. “Anyone could review a movie after seeing it; that was mere criticism. Doing it this way made it art.”

He also became a contributor to The New Yorker, for which he would write during and after the war, and where he eventually became a staff writer.

First, however, there was a war to get through. Shortly after graduating from Dartmouth, he was drafted and sent to Fort Benning, Ga., where in 1941, during the relatively relaxed period before Pearl Harbor, soldiers staged a show titled “Grin and Bear It,” written by Mr. Bernstein. (“It wasn’t very good,” he recalled, “but it was a show.”)

“Brooks Atkinson was coming down from The Times to see it,” he said, “and John O’Hara, who was the reviewer for Newsweek. It was a big thing. We were supposed to open on Dec. 10.” On Dec. 7, the Japanese attacked Pearl Harbor.

“One of the actors said, ‘Now we’re not going to get the critics,’” Mr. Bernstein recalled. “And we didn’t.”

While contributing military-themed articles to The New Yorker, Mr. Bernstein, who eventually attained the rank of sergeant, became a globe-trotting correspondent for Yank, the Army journal, a job that would last throughout World War II. It was for Yank that he got the scoop that would give him his first taste of fame.

“Army Writer Also Sees Tito but Censors Stop His Story” read the May 20, 1944, Associated Press headline: Mr. Bernstein, defying military protocol, had been spirited into war-torn Yugoslavia by anti-German partisans and given the first interview with Marshal Josep Broz, known as Tito, the Communist leader who would head the postwar Yugoslav republic until his death in 1980.

“I was the first Western correspondent to see him,” Mr. Bernstein recalled. “The Allies were planning to send in a couple of reporters from the pool and photographers, but the military wanted to delay any news about Tito till after the Second Front opened; the partisans wanted the opposite. They wanted publicity.”

Although Mr. Bernstein’s interview with Tito was temporarily quashed, the Associated Press article made it world news.

“I had an aunt who was a charter member of the Communist Party; she worked for the party as a stenographer or something like that,” Mr. Bernstein said in 2010 in an interview for this obituary. “And when I came back from the war, she asked me if I would talk to some Communist functionaries. I said that was all right with me. They wanted to know about Tito; nobody was telling them anything. And I told them about my adventures.”

“I didn’t join the party until after the war,” Mr. Bernstein said, although the events of the ’30s, including the Depression, the Spanish Civil War and the rise of fascism in Europe, made the Communist cause attractive to him. “The Communists,” he said, “seemed like they were doing something.”

In 1947, with his Yank and New Yorker experience under his belt, a well-received collection of his war stories (“Keep Your Head Down”) on the bookshelves and a hankering to get into movies, Mr. Bernstein went to Hollywood. He had been offered a contract with the writer-producer Robert Rossen at Columbia Pictures, where he did uncredited work on “All the King’s Men.”

Mr. Bernstein ended up staying in Hollywood for six months: His agent, Harold Hecht, had formed what would be a prolific production partnership with the actor Burt Lancaster and “offered me a job for twice what I was getting,” Mr. Bernstein recalled, “which still wasn’t much.”

That led to his first Hollywood credit, “Kiss the Blood Off My Hands” (1948), a crime drama starring Mr. Lancaster and Joan Fontaine. But by this time the blacklist was starting to make itself felt within an industry where left-wing political sentiments had previously been both common and tolerated.

“I was still in Hollywood in 1947, during the Hollywood Ten,” Mr. Bernstein said, referring to the prosecution of writers, producers and directors who had appeared before the House Un-American Activities Committee and refused to answer questions about their Communist affiliation. “I was working for Rossen, who was a Communist. At first it was the Hollywood 19, then it was cut down to 10. I don’t know why. Rossen was very upset that he hadn’t made the cut.”

No one took the hearings seriously at first, but they soon would. Mr. Bernstein was considered untouchable both in Hollywood and in the fledgling television industry in New York once his name appeared in “Red Channels,” an anti-Communist tract published in 1950 by the right-wing journal Counterattack.

“I was listed right after Lenny Bernstein,” Mr. Bernstein recalled. “There were about eight listings for me, and they were all true.” He had indeed written for the leftist New Masses, been a member of the Communist Party and supported Soviet relief, the Loyalists in the Spanish Civil War and civil rights.

Mr. Bernstein and other blacklisted writers were forced to work under assumed names for sympathetic filmmakers like Sidney Lumet, who used Mr. Bernstein, now back in New York, throughout the ’50s on “You Are There,” the CBS program hosted by Walter Cronkite that re-enacted great moments in history.

It was during this period that Mr. Bernstein and his colleagues, notably the writers Abraham Polonsky and Arnold Manoff, began the ruse of protecting their anonymity by sending stand-ins to represent them at meetings with producers, a ploy later dramatized in “The Front.” (In addition to Mr. Allen, the movie starred Zero Mostel, who, like the film’s director, Mr. Ritt, had also been blacklisted.)

“Suddenly, the blacklist had achieved for the writer what he had previously only aspired to,” Mr. Bernstein joked in “Inside Out.” “He was considered necessary.”

It was the now largely forgotten “That Kind of Woman” (1959), with Sophia Loren, that restarted Mr. Bernstein’s “official” career. The film’s director was Mr. Lumet, who hired Mr. Bernstein under his own name, thus effectively restoring him to the ranks of the employable.

In the years following the blacklist, Mr. Bernstein worked regularly for Hollywood, although he continued to live in New York. Among his film credits were the westerns “The Wonderful Country” (1959) and “Heller in Pink Tights” (1960), the Harold Robbins adaptation “The Betsy” (1978) and the Dan Aykroyd-Walter Matthau comedy “The Couch Trip” (1988). He received an Emmy nomination for the television drama “Miss Evers’ Boys” (1997), based on the true story of a 1932 government experiment in which Black test subjects were allowed to die of syphilis, and wrote the teleplay for the live broadcast of “Fail Safe” in 2000.

In addition to his wife, a literary agent, Mr. Bernstein is survived by a daughter, Joan Bernstein, and a son, Peter Spelman, from his first marriage, to Marva Spelman, which ended in divorce; three sons, Nicholas, Andrew and Jake, from his third marriage, to Judith Braun, which also ended in divorce, as did a brief second marriage; his stepdaughter, Diana Loomis; five grandchildren; two great-grandchildren; and a sister, Marilyn Seide.

Six decades after the fact, Mr. Bernstein voiced a warmly nostalgic view of the Red Scare period, an era that has become synonymous with intolerance and fear.

“I don’t know if it’s true of other people getting older,” he said, “but I look back on that period with some fondness in a way, in terms of the relationships and support and friendships. We helped each other during that period. And in a dog-eat-dog business, it was quite rare.”

'The Lion King' Director Jon Favreau on Giving His Version a Documentary Feel, the Challenges of Expectations, and Much More [Set Visit Interview]