Home » ‘The Vigil’ Review: What Could Go Wrong Watching Over the Dead?

Money pulls in a night watcher, but a malicious spirit gets into his head in this feature debut from Keith Thomas. 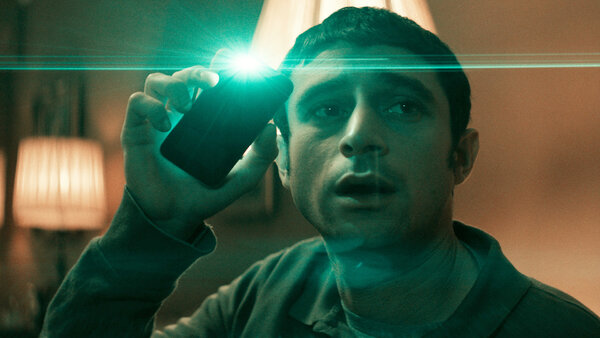 It is Jewish tradition to have someone watch over the dead until they are buried. That person is called a shomer. Yakov (Dave Davis), a young Jewish man who has left behind a strictly Jewish-observant life, is pulled into last-minute night-watch shomer duty. He’s reluctant but could desperately use the $400 that he is promised. What could go wrong with just a few hours spent next to a dead body, anyway?

So much. Keith Thomas’s slim but effective “The Vigil” milks terror from a minimalistic setup, relying on the shapes we make out with squinted eyes in the shadows. Yakov’s shift comes with ample warning: The shomer before him dropped out for mysterious reasons. Then there’s the widow, Mrs. Litvak (the late Lynn Cohen, in one of her final roles), who pleads with Yakov, upon his arrival, “to leave now.” Thomas is clever to leave Yakov just vulnerable enough to stay.

Also feeding on Yakov’s vulnerability is a Mazzik, a malicious spirit of Jewish folklore, looking for a new host. It manipulates a painful memory from Yakov’s past. He wonders whether he’s imagining things because of a side effect of medication he most likely takes to cope with trauma from his past.

Thomas’s missteps occur when he strays from his simple formula. The minuscule flinch of the dead body is far more spine-tingling than the cacophonous chaos that later ensues. The unique premise marries Old World traditions and Holocaust history with present-day Hasidic Brooklyn, but the addition of technological elements is hit or miss. The Mazzik overriding Yakov’s smartphone communication is clever, but the film could have done without Yakov killing time during the vigil by Googling, “How to talk to women.” (period included).

The Vigil
Rated PG-13 for the things that go bump in the night. Running time: 1 hour 29 minutes. In theaters and available to rent or buy on Apple TV, Google Play and other streaming platforms and pay TV operators. Please consult the guidelines outlined by the Centers for Disease Control and Prevention before watching movies inside theaters.

Lin-Manuel Miranda on 'Hamilton,' Freestyle Love Supreme and What Comes Next