Daniel Henshall is so skilled at playing evil characters like Snowtown's serial killer John Bunting that he's become used to people feeling let down when they meet him in real life.

"There's often a hint of disappointment that there isn't that gravitas or intensity they were expecting," says the softly spoken Sydney-born, Brooklyn-based actor. "I've got used to going, 'Sorry'." 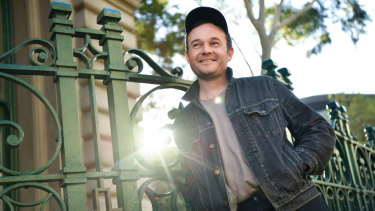 The latest addition to the 36-year-old's catalogue of nasties is the late painter Adam Cullen in Acute Misfortune. In it, he tortures – mentally and, occasionally, physically – the young journalist Erik Jensen, on whose book the film is based.

He lived with the role of Cullen for years, helping director Thomas M. Wright, who co-wrote the screenplay with Jensen, to shape the character. He learnt to paint, to shoot, to skin an animal. He put on weight – and, later, shed it – for the shoot too. But, says Henshall, he never felt he was being subsumed by Cullen.

"I definitely never stay in character," he says. "I like playing the fool on set, making jokes, chilling out. When it's time to lock in I lock in, but I find that the easier it is on set – the less tense it is when it doesn't need to be – the better the environment to work in. You don't need the earnestness and the seriousness to be front-and-centre every day."

It's a relief to hear that hanging around Henshall while he's working isn't likely to be life-threatening, especially since he can also be seen in next month's Sydney Film Festival playing a violent Nazi skinhead in the American feature Skin. But he's dubious anyway about those tales of actors who stay in character for months at a time while working on a film.

"I think there's a reverence around that notion that isn't completely honest," he says. "It's a great selling point – 'He stayed in character' – but it isn't necessarily true."

What Henshall does do is find a way to empathise with the character he is playing, no matter how vile they might appear to be.

In the case of the alcoholic and hyper-masculine Cullen, that meant understanding him as someone who had never recovered from a failed relationship, someone who was, despite his success (including as a serial finalist in and, in 2000, winner of the Archibald Prize), "a very isolated and lonely, sensitive person who leaned on very self-destructive practices to keep himself from the rejection of the art world".

In the case of Bunting, who was found guilty in 2003 of murdering 11 people, Henshall honed in on the suggestion that he had been sexually abused as a child. "I've never been abused but there was something in that, I could see a lost child who didn't develop emotionally," he says. "That was the key to locking in to John – this little child that wasn't necessarily loved in a way he deserved to be."

That willingness to go deep is what breathes such intensity and authenticity into Henshall's performances. But for those who know him best, it can also make for unsettling viewing.

Just the day before we sit down to chat – me with my recorder, he with his notebook full of jottings because he's a bit jet-lagged and has a tendency "to wander off the path fairly easily" – his mother had told him how difficult she finds it to see him in the kind of violent men in which he seems to specialise.

"She said, ‘It’s hard for me to separate my son, in whom I instilled these values and who is a gentle person – though I know he can be angry too – and these roles'," he says.

His parents are strongly Anglican, and still involved in community and charity work through the church. And while he says he's "absolutely not" religious, perhaps some of that caring rubbed off regardless.

"I try to instil in these characters an affability, to give them a chance to be heard," he says of his studies in toxic masculinity. "Not just to look at the behaviour, but to what led to that behaviour." 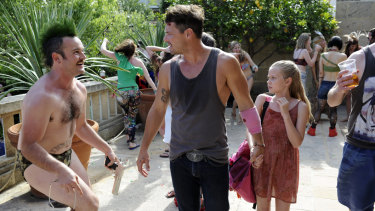 As Freddy (left), partying till he literally drops in the apocalyptic drama These Final Hours (2013). Credit:Roadshow

Henshall says he and his wife, costume designer Stacey O'Connor (the pair share a place in Green Point, Brooklyn, with fellow Aussie actor Sarah Snook) are hoping to start a family soon. That's both a mark of age – "I feel like I'm finally turning into an adult nearing the age of 37" – and proof of the confidence he finally feels in his career, thanks to a four-season stint in the American Revolutionary drama Turn: Washington's Spies and roles in Hollywood films Ghost in the Shell and Okja, as well as a part alongside Chris Captain America Evans in Defending Jacob, a forthcoming series for Apple.

He's not always cast as the villain, of course; in both the recent Stan drama Bloom and Foxtel's forthcoming Lambs of God, he plays a cop. But if his future path includes more bad guys, he won't be complaining.

"I find it really interesting to unpick the facade of masculinity," he says. "Really unpicking some of those complex emotions and insecurities, that fascinates me."

No fear of being typecast then?

A Fan Theory Suggests That Willy Wonka Was a Serial Killer