Home » Movies » The Banana Splits Got a Movie. It’s Probably Not What You Think.

The new Splits have split from the old Splits, which may split Splits fans. Because this time the Splits aren’t just sidesplitting.

Translation: “The Banana Splits Adventure Hour” was a Saturday morning children’s variety show that ran on NBC from 1968-1970. It featured four furry, mascot-sized members of a fictional rock band called the Banana Splits — Fleegle the beagle, Bingo the ape, Drooper the lion and Snorky the elephant — who sang silly songs and took goofy trips to amusement parks.

But now, a half-century later, the Splits aren’t quite themselves. A little less silly, a little more murder-y, they’re the gleefully sinister villains in the new “Banana Splits Movie,” a darkly comic R-rated horror film that includes death by lollipop. (The movie was made available to buy through multiple online platforms on Tuesday and will air on Syfy in October.)

Some fans of the sugary original are sure to balk at the change of sensibility. But for the creative team behind the movie, the logic was obvious.

“The sunglasses that hide the eyes, the frozen expressions and mouths that sometimes move and don’t,” said Danishka Esterhazy, the film’s director. “It wasn’t a stretch to take that creepiness and turn it into a horror movie.” 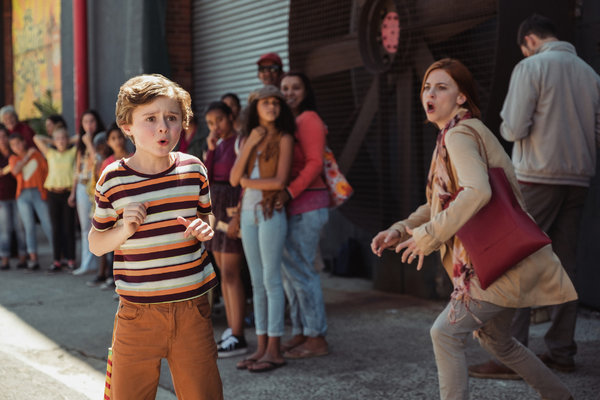 Set in the present day, “The Banana Splits Movie” circles around a young boy (Finlay Wojtak-Hissong) whose love of “The Banana Splits” TV show — still running since 1968 — makes him an outsider. For his birthday, his mother (Dani Kind) gets him tickets to a taping. But when the Splits learn that their show has been canceled, their true nature is revealed in a twist as over-the-top as the many creative ways they find to start butchering the studio audience.

For horror fans, it’s not an outrageous idea given the genre’s history of finding evil in the comforts of childhood (like the doll in “Child’s Play,” itself recently rebooted) if not in children themselves. And the Banana Splits’ frozen smiles, manic driving and happy-go-lucky theme song (“Tra-la-la, la la la la”) align with some of horror’s most treasured conventions.

“You don’t know who’s in that suit or what they do when they go home or what messed up things they do on their own time,” said Scott Thomas, who wrote the film with Jed Elinoff. “Seeing a kid trust this character to be nice is a pretty awful thing. But it’s also a pretty fantastic thing when you’re writing a horror movie.”

Recasting a sweet children’s show as a macabre, gory horror movie is, nevertheless, a renegade move. It’s especially startling considering the source material comes from Hanna-Barbera (now owned by Warner Bros.), the animation studio behind such family-friendly 1960s favorites as “The Flintstones” and “The Yogi Bear Show.” As Bill Hanna wrote in his 1996 memoir, the characters he developed with Joseph Barbera “were likable, they were funny, and you could tell that they cared about each other.”

It was a working formula. “The Flintstones” became the first animated show to air in prime time, and cartoons like “The Jetsons” and “Scooby-Doo” helped establish the Saturday morning cartoon. “The Banana Splits Adventure Hour” was Hanna-Barbera’s first live-action addition to the Saturday morning lineup, modeled after the psychedelic pop-music romps of “The Monkees.”

The new movie’s sinister twist is, to put it mildly, a departure from that formula. Jesse Kowalski, who curated a 2016 exhibition about Hanna-Barbera for the Norman Rockwell Museum in Stockbridge, Mass., said Hanna and Barbera “would have hated it.”

“They were very protective,” added Kowalski, who had not seen the film. “They were trying to make feel-good shows.”

Attitudes, like the corporate ownership, may have changed. Last month, Warner Bros. Animation announced it was rebooting “The Flintstones” as a prime-time animated adult comedy series. And the idea of a grown-up, “flipped genre” reboot for the Banana Splits had been kicking around Warner for some time, said Peter Girardi, executive vice president of alternative programming for Warner Bros. Animation and of Blue Ribbon Content, a division of Warner Bros. Television Group.

Executives at Blue Ribbon, who conceived the movie idea before commissioning the script and hiring a director, saw an opportunity in the original show’s ultra-mod design to draw upon the chic, lurid stylings of 1960s and ’70s Italian horror films from directors like Dario Argento and Mario Bava, said Girardi.

“Their films, and the saccharine, candy nature of kids’ television at the time, were garishly lit, with oversaturated colors on incredible sets,” he said. “There’s a corollary there, and that’s something we wanted to explore.”

(A spokeswoman for Warner Bros. said the film had always been intended for home and broadcast release.)

Much of the original series’s look and feel resulted from costumes and sets designed by the brothers Sid and Marty Krofft, who were behind other popular live-action children’s shows of the 1970s like “Land of the Lost” and “H.R. Pufnstuf.” Far from hating the horror twist, Marty Krofft said he was cautiously optimistic that the demonic Splits would forge a new generation of fans.

“The take is interesting, so who knows?” he said. “I think it’s a good idea. We’ve always said that the kids’ shows we’ve done could be prime-time ideas.”

Girardi acknowledged that Warner would probably never risk turning an “A property” like Bugs Bunny into a killing machine. Still, he viewed “The Banana Splits Movie” as a form of creative care-taking as well.

“It’s important to us as stewards of these characters, who are going to go on a lot longer than we are, that we treat them with respect,” he said. “But we also want to embrace what is inherent in the characters: that they are all a little freaky.”

‘Men in Black: International’ Leads a Parade of Slumping Sequels