Spoiler alert: You will not find ”Die Another Day“ on this list 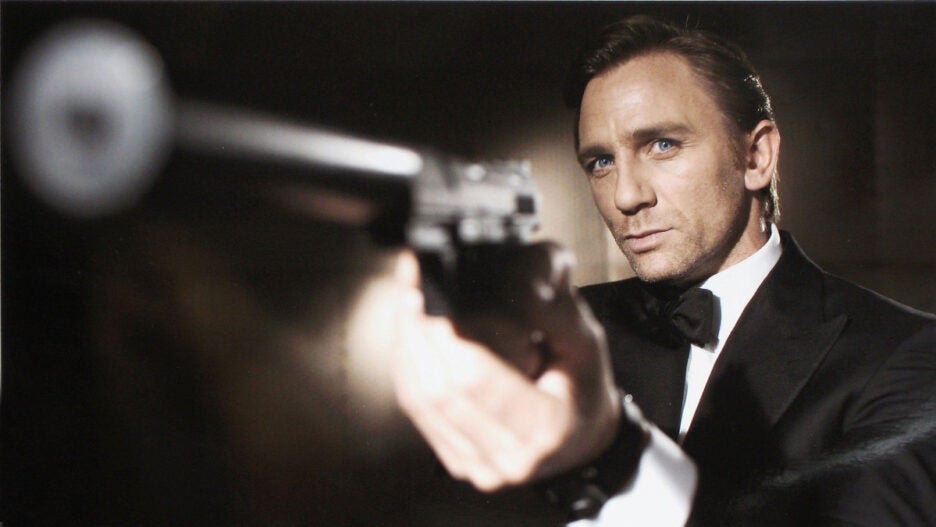 When you go see a new James Bond movie, you know you’re guaranteed to get a few things. Fancy cars, suave suits, complicated drink orders and of course, a brand new theme song. And just like the films themselves, the theme songs can vary in quality quite substantially (the less said about that abysmal “Quantum of Solace” song the better). This tradition began with 1964’s “Goldfinger,” one of the best and most successful Bond films in history. The Sean Connery film kicked off with an original theme song by Shirley Bassey, who would go on to croon for two additional Bond movies down the road, and for each successive Bond movie a new artist was tapped to record song specific to that film. Five such songs have been nominated for the Best Original Song Academy Award, and two – Adele’s “Skyfall” and Sam Smith’s “Writing’s on the Wall” – actually won.

But which are the best Bond theme songs? Who reigns supreme in the battle between Adele and Shirley Bassey and Tom Jones? Below, we’ve rounded up 11 such songs that have stood the test of time.

“Goldeneye” notwithstanding, the 1990s Bond movies suffered a bit of an identity crisis. The Cold War was over, and the franchise struggled to figure out where a super spy like James Bond fit in. The music world was also changing rapidly throughout the ’90s, which is why you have artists as varied as Tina Turner, Madonna, and Sheryl Crow taking on theme song duties. But it’s Garbage’s “The World Is Not Enough” that stands tallest in the Brosnan era – on brand for the rock group, but also somehow perfectly fitting for a ’90s Bond.

“Moonraker” is one of the worst Bond movies ever made, but bringing Shirley Bassey back for this space-themed caper was a brilliant move. The theme for this Roger Moore Bond film is romantic and sweeping – in line with Moore’s more subdued, less aggressive take on the character. If only the film were half as good as this song.

A bit of recency bias here perhaps, but Billie Eilish is a surprising fit for Daniel Craig’s final turn as 007. In “No Time to Die,” Eilish brings her signature hushed tones to the tune, but it swells to a rather emotional climax and even features a classic Bond guitar riff at the very end. The combo of Eilish, Finneas O’Connell, and Hans Zimmer proves fruitful.

Tom Jones and the Bond franchise is a match made in heaven. His theme for 1965’s “Thunderball” is thrilling and bombastic and effortlessly smooth, and it accompanied the box office smash nicely. Indeed, “Thunderball” still stands as one of the most financially successful Bond movies ever made when accounting for inflation, as it came at the height of Sean Connery’s popularity as the character – even if the film itself is so obsessed with underwater photography it forgets to craft a compelling plot.

2006’s “Casino Royale” was the biggest reinvention the Bond franchise ever undertook, introducing Daniel Craig as a more vulnerable, more human iteration of the super spy while also touching on an origin story for Bond for the first time. Fittingly, Chris Cornell’s “You Know My Name” sounds rather unlike any other Bond song up to this point. And somewhat uncharacteristically this one isn’t chasing some popular 2000s music trend (thankfully producers didn’t reach out to NSYNC). It’s a rock song, but somewhat classical in structure. A swell introduction for one of the best Bond movies ever made.

6. “You Only Live Twice” – Nancy Sinatra

While 1967’s “You Only Live Twice” certainly has its problems as a film, Nancy Sinatra’s theme song is a sweepingly romantic tune. The song takes some influence from the film’s Japan setting, but Sinatra’s take on the material feels somewhat timeless.

Duran Duran’s Bond song is a bop, full-stop. Legend has it that the involvement of Duran Duran in the Bond franchise began when bassist John Taylor confronted producer Cubby Broccoli at a party and asked him when they were going get someone “decent” to do one of their theme songs. The ’80s were largely a disappointing decade for the franchise, and Roger Moore’s final outing isn’t all that memorable, but the “A View to a Kill” theme song is one of the series’ best.

4. “Nobody Does It Better”- Carly Simon

Carly Simon’s “Nobody Does It Better” is one of the most un-Bond-like theme songs in the entire franchise, and it’s partly for that reason that it stands out as one of the most unforgettable. It was certainly a choice to open 1977’s “The Spy Who Loved Me” with a slow power ballad, but it also makes sense for Roger Moore’s take on the character. Even if the quality of the song doesn’t quite match the cartoonish nature of the villain’s silly “I’m going to build a city under the ocean” plot in the film.

Certainly the most epic Bond theme song ever written, “Live and Let Die” finally brought some Beatles blood into the U.K.-born franchise. Written by Paul and Linda McCartney and performed by their band Wings, the song is wonderfully complex, beginning as a more traditional Bond theme before launching into a full-on rock section and then morphing into a jaunty ditty. To date it remains a concert staple for McCartney, and is one of the most iconic Bond themes ever recorded.

It’s tempting to put “Skyfall” in the first slot given that it’s just such an incredible song, so consider this a somewhat tie for first place. Adele’s emotionally profound theme is just… perfect. There’s no other way to describe it. Sam Mendes’ 2012 film was crafted as the ultimate James Bond movie, boasting callbacks to the franchise’s past while moving it forward in a character-driven way. To that end, Adele’s theme feels like it owes inspiration to the classic stylings of Shirley Bassey, albeit crafted in Adele’s own voice.

It’s a testament to the franchise’s longevity that they really knocked it out of the park with their first outing. “Dr. No” and “From Russia with Love” featured credits sequences set to instrumental tunes, but 1964’s “Goldfinger” opens with a bold, confident, and catchy tune performed by Shirley Bassey that still stands today as the quintessential Bond theme. It so fully captures the essence of the franchise at that point, and compliments the “100% pure Bond” nature of the film, which would introduce and refine certain hallmarks that would remain for decades to come. It is, simply, the best.

‘Chad and not Chadwick’: How the Bosemans Remember a Superstar