Teen-focused media startup Brat is now developingcustom video ads featuring talent from its own shows, per Business Insider. Founded in 2017, Brat has developed a popular crop of TV series aimed at a teen audience and produced mainly for YouTube, such as ” Chicken Girls,” which has about 15 million viewers on YouTube. 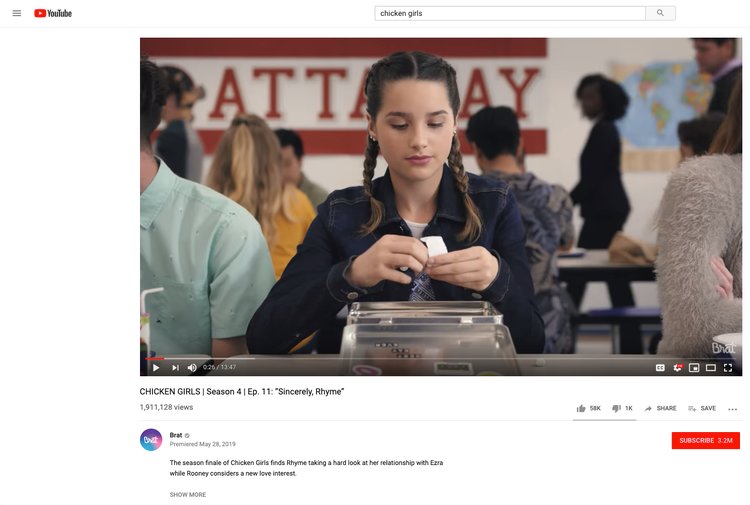 Here’s what it means: Most of Brat’s revenue comes from direct ad sales, and it could generate even greater revenue by developing these custom campaigns for brands that wish to advertise on its shows.

The high completion rate is likely because ads that integrate talent from the shows can feel more organic and less interruptive. So far, Brat has also done custom campaigns with Universal Pictures, and its pool of clients is likely to grow fast, given its promising initial results and brand desire to reach digital-native Gen Zers.

The bigger picture: This strategy might be effective for Brat because its shows are native to social platforms, and because its primary audience is digital natives themselves.

Young people are likely to feel a closer connection with social stars and creators than they do with traditional celebrities, who are more distant by comparison. That’s likely due in part to the flattening effect of social media, which has emboldened consumers to engage more directly with social creators on platforms.

And YouTubers and other social creators will reciprocate: Unlike traditional stars, YouTubers and other social creators will actively engage with their audience in ways that encourage further interaction, such as by responding to comments. More than one-third (34%) of kids ages 6-17 consider social media stars to be among their top role models, compared with traditional actors (22%), per Mintel.

As a result, including social-native talent — like the stars of Brat’s shows — in custom video ads is more likely to feel more organic and appeal more to teen viewers.

Customized talent integrations are more likely to take hold on social platforms than SVOD/AVOD platforms.While platforms like Hulu could theoretically replicate the approach to make ads more engaging — particularly when ads aren’t skippable — it’s less clear that this would generate the same audience enthusiasm. SVOD and AVOD platforms aren’t interactive in the way social platforms are, so ads that attempt to pull that lever may fall short.

Beyond Hulu and YouTube, strictly AVOD platforms like Tubi, Pluto TV, and Amazon’s IMDb TV may struggle to replicate the strategy because their services are typically heavily populated by licensed, older content. But an outlier might be the forthcoming mobile-first platform Quibi, which isinnovating its ad experiences to be highly compelling in their own right. Quibi is developing high-quality video ads, some of which will follow a serialized format, meaning ads will also tell a story.

1. Sign up for the Digital Media Briefing to get it delivered to your inbox 6x a week. >> Get Started

2. Subscribe to a Premium pass to Business Insider Intelligence and gain immediate access to the Digital Media Briefing, plus more than 250 other expertly researched reports. As an added bonus, you’ll also gain access to all future reports and daily newsletters to ensure you stay ahead of the curve and benefit personally and professionally. >> Learn More Now