Onstage, on television and, finally, at the movies, there was no missing the irrepressible Cloris Leachman, who died on Wednesday at 94. She was an all-purpose entertainer who became best known for her no-holds-barred comedy. But that same openness left room for moments of disarming sensitivity and heart.

She was also the rare performer to reach the prime of her career at middle age, with her role as Phyllis Lindstrom in the groundbreaking “The Mary Tyler Moore Show” and in her Oscar-winning turn in “The Last Picture Show.” Still decades later, she proved durable enough to cut a rug on “Dancing With the Stars” at age 82 and continued acting into her 90s.

Although some of Leachman’s notable roles are currently not available to stream in the United States, like her striking appearance in the 1955 noir classic “Kiss Me Deadly,” most of her major work is easy to sample. While she is perhaps best remembered for her collaborations with James L. Brooks, Mel Brooks and Peter Bogdanovich, Leachman also thrived in voice work for animated films, including two for Studio Ghibli, and seemed willing to push herself to greater comic extremes as she got older. These seven films and three TV series showcase her versatility and moxie.

In James L. Brooks and Allan Burns’s groundbreaking sitcom about Mary Richards (Mary Tyler Moore), a single, independent woman working behind-the-scenes at a Minneapolis TV news program, Leachman’s Phyllis is an agent of chaos, constantly swooping in and upending Mary’s day. Phyllis and her unseen dermatologist husband are landlords to Mary and her best friend, Rhoda (Valerie Harper), and she has a tendency to poke around in their business, upsetting Rhoda especially with her flighty arrogance. Leachman’s appearances are heavily weighted toward the show’s first two seasons, but her performance was enough to score her a couple of Emmys and the spinoff hit “Phyllis,” which ended the same week the flagship show did.

Stream it on Hulu. Buy it on Amazon, Apple TV and Vudu. 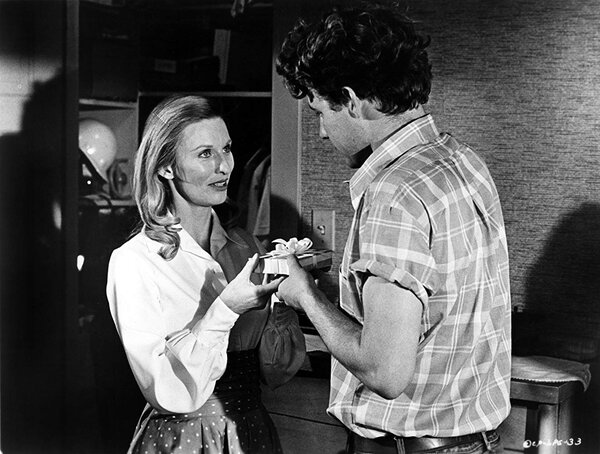 Leachman won an Oscar for best supporting actress for her shattering performance in “The Last Picture Show,” embodying the sadness and quiet desperation that pervades Peter Bogdanovich’s elegy for a dying North Texas town. As Ruth Popper, the bored wife of an oafish football coach, Leachman plays a Southern flower that’s dying on the vine until she takes up with Sonny (Timothy Bottoms), a high school senior of limited sexual experience. Ruth seems to know her role in Sonny’s coming-of-age story, but she is nonetheless unprepared for the inevitable conclusion, which Leachman registers as the latest in a lifelong series of disappointments.

After following “The Last Picture Show” with “What’s Up, Doc?” and “Paper Moon,” Peter Bogdanovich’s hot streak ended with this troubled adaptation of the Henry James novella “Daisy Miller.” But the film’s reputation has improved over time, buoyed by its serio-comic treatment of a brazen American flirt (Cybill Shepherd) in Europe and her trampling of social mores. Leachman’s role as the young woman’s mother carries some of the timidity of her character in “The Last Picture Show,” but here it’s covered by a nervous chattiness that is scarcely less vulgar and conspicuous in their upper-crust surroundings.

The running gag most associated with Leachman in Mel Brooks’s Universal monster-movie spoof requires little acting on her part, but it speaks to her presence as a severe German housekeeper that all the horses whinny in terror whenever someone utters the name Frau Blücher. Blücher’s roots in the Frankenstein estate in Transylvania are explained in hilariously dramatic fashion later, but in the meantime, her dedication to the mad vision of Dr. Frankenstein (Gene Wilder) and his monstrous creation (Peter Boyle) is unrivaled. She also stands ready to offer Herr Doctor a brandy before he retires for the night. Or some warm milk. Or Ovaltine.

Stream it on Starz.

A young Jonathan Demme (“Silence of the Lambs”) hadn’t quite matriculated from the Roger Corman school of filmmaking when he agreed to direct this low-budget Corman production on short notice. But he and a brassy Leachman, in a rare lead role, play the material for all it is worth. Although it was a follow-up to the “Bonnie & Clyde” knockoff “Big Bad Mama,” “Crazy Mama” emphasizes comedy over violent mayhem as three generations of Stokes women, led by Melba Stokes (Leachman), embark on a rolling crime spree from California to their ancestral home in Arkansas. Nothing about the film (or Leachman’s performance) is underplayed, but it has an affectionately rollicking spirit, underscored by a terrific ’50s rock soundtrack.

Stream it on Amazon Prime Video.

Throughout the back half of her career, Leachman was a sought-after voice talent in animated films, with vocal turns in films like “My Little Pony: The Movie,” “The Iron Giant” and “Beavis and Butt-Head Do America.” But Leachman also contributed substantive work on English dubs of Hayao Miyazaki’s 2009 fantasy, “Ponyo,” and of his breakthrough film, “Castle in the Sky,” a bewitching steampunk adventure about the search for a floating castle. As Dola, the bossy leader of a band of air pirates, Leachman initially suggests a menacing adversary. But as more is revealed about Dola’s motives, the character’s hidden nobility turns our heroes (and the viewer) around.

Stream it on HBO Max.

Over 30 years after they worked together on “The Mary Tyler Moore Show,” Leachman and the writer-director James L. Brooks re-teamed for this romantic comedy about the relationship between a wealthy, laid-back chef (Adam Sandler) and a single mother from Mexico who gets a job as the family’s nanny and housekeeper (Paz Vega). Leachman plays the boozy mother of Sandler’s high-strung wife (Téa Leoni), which mostly gives her the opportunity to sling tart one-liners in the middle of a domestic meltdown. But she sobers up long enough toward the end of the film to give her daughter an urgent piece of advice, and Leachman’s motherly earnestness in this moment is as touching as it is unexpected.

Stream it on Crackle. Rent it on Amazon, Apple TV, Google Play, Vudu and YouTube.

There are shades of Frau Blücher to Leachman’s recurring and Emmy-winning role as Ida Welker, a comprehensively evil grandmother of vaguely Eastern European descent who occasionally drops in to visit the Wilkersons, irritating and embarrassing them with her nastiness and bigotry. Leachman turned up periodically in episodes from the second season through the series finale in the seventh, and she brought with her an air of toxic, manipulative narcissism that rival Livia Soprano’s. In one episode, she sues her own daughter and son-in-law after slipping on a leaf in their driveway; in another, she reveals all the Christmas presents she has decided to withdraw from the family for minor offenses. Her cartoon villainy suits the tone of this slap-happy sitcom.

Stream it on Hulu.

Throughout her career, Leachman was willing to do absolutely anything for a laugh, so she was right at home in this raunchy comedy from the comedy troupe Broken Lizard (“Super Troopers”) about a secret Oktoberfest competition where teams vie for beer-game supremacy. Dressed up like Heidi gone to seed, Leachman plays Great Gam Gam Wolfhouse, who isn’t ashamed to talk about her past as a prostitute or use a piece of summer sausage to demonstrate some tricks of the trade. It’s a minor part that’s intended for shock, but Leachman’s lack of shame is totally disarming, a sharp contrast to the frat-guy boorishness that surrounds her.

Stream it on Hulu. Rent it on Amazon, Apple TV, Google Play, Vudu and YouTube.

As the dementia-addled “Maw Maw” in this offbeat working-class comedy, Leachman mostly drifts in and out of the background, chain-smoking cigarettes, eating pickles from the jar and sometimes mistaking her great-grandson Jimmy (Lucas Neff) for her dead husband. Only occasionally is Maw Maw lucid enough to notice that her granddaughter Virginia (Martha Plimpton) and Virginia’s screwed-up family are living in her dilapidated house rent-free, raising the daughter Jimmy got from a one-night stand with a serial killer. The role calls on Leachman as a primary source of its sitcom surrealism, relying on her willingness to play embarrassing flourishes to the hilt.

Stream it on Hulu. Buy it on Amazon, Apple TV, Google Play and Vudu.