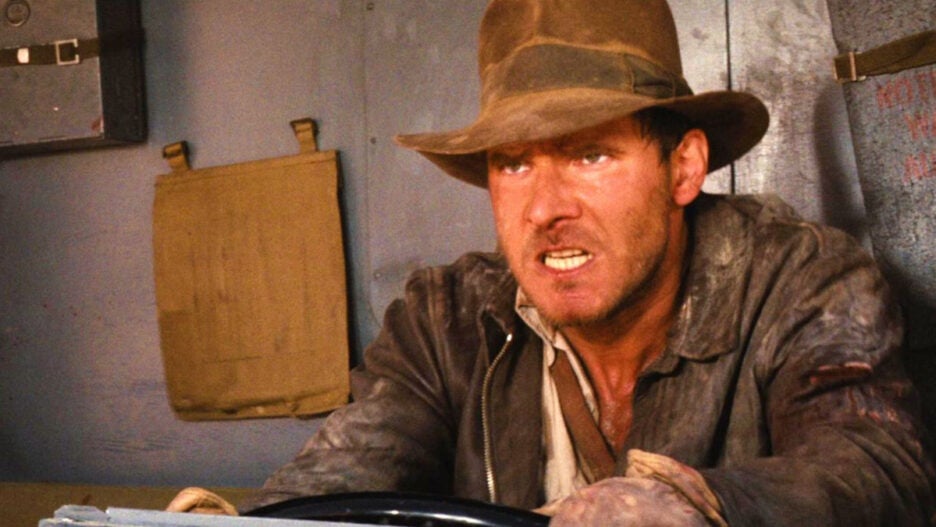 Steven Spielberg is undoubtedly one of the best filmmakers who’s ever lived, but pinpointing exactly why unearths a bounty of riches. One specific way in which Spielberg is a cut above, however, is his knack for crafting set pieces that are not only thrilling, but advance the story and tell the audience about the character all at the same time. It’s easier said than done, and Spielberg has done it time and time again over his 50-year career thus far – including in his first-ever musical “West Side Story.”

So with “West Side Story” finally hitting theaters this weekend, we thought it prudent to look back on some of Spielberg’s most outstanding set pieces of the past that highlight exactly why he’s held in such high esteem.

The Opening Scene in “Jaws”

As Spielberg’s filmography exemplifies, a “set piece” doesn’t have to involve explosions or footchases. Sometimes it can be as simple as a woman getting eaten whole by a shark in the dead of night. The opening sequence of “Jaws,” Spielberg’s first masterpiece, sets the stage for what’s to come – not just in terms of the danger the shark poses, but the threat of something terrifying quietly looming just under the water’s surface. The brilliance of the film’s portrayal of the shark was, of course, a matter of compromise as the mechanical shark wasn’t working. But by switching between the first-person view of the shark underneath the water and the calm goings-on above the surface, Spielberg builds tension perfectly.

The Truck Chase in “Raiders of the Lost Ark”

“Raiders of the Lost Ark” was conceived of as an uncomplicated and quick shoot following the financial failure of Spielberg’s flop “1941,” and stripping the filmmaker down to the essentials resulted in one of the greatest films of all-time. There’s plenty of iconic action and shot construction in “Raiders,” but the truck chase remains one of the most thrilling and engrossing set pieces because it’s driven entirely by character. As Harrison Ford’s Indiana Jones gets the absolute snot kicked out of him time and again, he literally gets back on the horse to fight Nazis in tanks. Twists and turns abound, and the construction of this entire sequence is a masterclass all its own.

The T. Rex Gets Loose in “Jurassic Park”

The advent of CG technology became a crutch for plenty of filmmakers (and still is, frankly), but when Spielberg decided to use the brand new tech to bring dinosaurs to life in 1993’s “Jurassic Park,” he instinctually knew how to use it as a tool to enhance the storytelling. The scene in which the T. rex steps out of his enclosure as two cars are parked right outside, all in the pouring rain, remains an all-timer as it begins with quiet tension and a cup of water and ends with lots of mud and a man getting eaten on a toilet. No matter how many times you’ve seen it, you still tense up when little Joseph Mazzello points his flashlight directly in the T. rex’s eye.

Bonus Set Piece: While “The Lost World” doesn’t have the same magic as the first film, the sequence in which two T. rexes attack the trailer is one of Spielberg’s absolute best.

The liquidation of the Kraków Ghetto in Spielberg’s Oscar-winning 1993 film “Schindler’s List” is one of the most harrowing sequences in cinematic history, but it exemplifies why Spielberg is such a great storyteller. He knows that action is story, and he puts viewers in the middle of one of the most horrific events in history while maintaining the humanity of the victims within. The added touch of the “girl in the red coat” in this black-and-white film underlines the innocence of the victims of the Holocaust, and Spielberg manages to be respectful and truthful throughout the entire re-creation.

The Invasion of Normandy in “Saving Private Ryan”

Spielberg mined history to dramatically re-enact another harrowing event in his 1999 Oscar-winning World War II film “Saving Private Ryan.” The filmmaker is known for storyboarding his films carefully, but for the landing at Omaha Beach in the opening sequence of the film, Spielberg decided to construct the sequence live on set piece by piece as the characters moved ashore. The result is a gritty, harrowing and shocking sequence that puts the audience right in the middle of the action – and, by extension, serves to allow viewers to better understand the terror and confusion that American soldiers faced during this particular historic event.

The director’s 2005 adaptation of “War of the Worlds” was his response to 9/11. This is a story of an alien invasion told entirely from the point of view of Tom Cruise’s father character – we only ever see what he sees. And to that end, the first contact he has with these invaders as one of their ships sprouts from the ground is Spielberg’s version of the towers falling on 9/11. This is a story about what happens during and in the immediate aftermath of a national attack, the chaos that followed and how we as human beings reacted. The ash on Cruise’s face is downright chilling.

A One-Take Wonder in “The Adventures of Tintin”

Spielberg let his instinct for shot composition run wild, free of the physics of the real-world in his animation debut “The Adventures of Tintin.” The motion-capture film is full of fun set pieces, but the reason to see this film is the one-take chase sequence that could only be possible in the world of animation. Even without a physical camera, so to speak, Spielberg knows exactly where to put it to keep viewers engaged and wowed by the action.

Ghost, Annie, Babe, A League of Their Own, more returning to theaters