This article contains spoilers for “Spider-Man: Far From Home.”

When it came to crafting “Spider-Man: Far From Home,” the screenwriters, Chris McKenna and Erik Sommers, had an awfully complicated web to weave.

The movie sends Peter Parker (and his superhero alter ego, Spider-Man, both played by Tom Holland) on a class trip through Europe, but “Far From Home” still had to grapple with the tragic ending of “Avengers: Endgame,” in which Peter lost his mentor, Tony Stark.

“Far From Home” also introduces Quentin Beck (Jake Gyllenhaal), another superhero who appears to be on Peter’s side but whom savvy comic-book fans will immediately recognize as Mysterio, one of Spider-Man’s classic foes. And then there’s the matter of unraveling character threads introduced in 2017’s “Spider-Man: Homecoming,” including Peter’s budding relationship with his classmate MJ (Zendaya).

In a recent phone conversation, McKenna and Sommers (whose previous collaborations include “Spider-Man: Homecoming” and “Jumanji: Welcome to the Jungle”) explained how they juggled those many plot points and came up with a surprise end-credit twist that promises to spin Spider-Man in a whole new direction. Here are edited excerpts from that conversation. 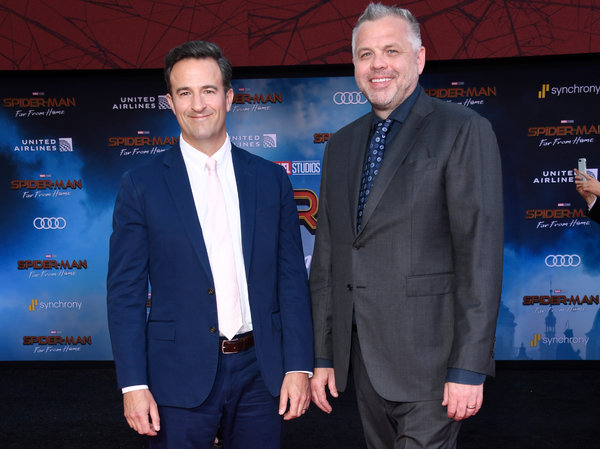 How did you arrive at the decision to introduce Mysterio as an ally who’s working with Samuel L. Jackson’s Nick Fury?

CHRIS McKENNA One of the hardest things with these movies is landing on the villain. With Mysterio, there were versions of the story where he was at the forefront as an out-and-out villain that Peter and Nick were chasing around Europe as he pulled off these events, all building to this back story of why he was doing it, which was a wholly different third act. We went down a lot of different roads.

ERIK SOMMERS But ultimately, because Mysterio deals so much in deception, it was sort of natural that it led to a story structure where his entire identity was a mislead for a while.

McKENNA There’s going to be people familiar enough with the comics who are going to see right through him, but you kind of can’t worry about that when you’re coming up with a plot like this. You just have to hope that you can get away with it long enough so that when the reveal comes up, people are still having fun with the movie.

And Mysterio employs enough deep-cut comic-book references — including a back story involving an alternate version of Earth — that even super fans might find themselves convinced at first.

SOMMERS That definitely did help. Any time we find ourselves with a twist or surprise reveal of something like this, we want to do as much as we can to protect it and distract from it ahead of time.

McKENNA What we kept saying is that he had to feel like a real character, so we wanted to give him a tragic back story with all the details of coming from another world, and make sure that the Elementals he’s fighting felt like a growing, Avengers-level threat. Obviously, it was all smoke and mirrors, but we wanted to make it as believable as possible, and what helped was making Nick Fury — the most paranoid man on the planet — seemingly fall for it.

SOMMERS If you think of what Mysterio is doing as being a con, then a smart con man is going to employ other people to help sell his lie.

In the end-credit scene, we find out that Nick isn’t Nick at all — instead, a shape-shifting alien from “Captain Marvel” has been posing as Nick Fury for the entire movie.

McKENNA Thematically, we wanted to have as many illusions and twists as possible, and up through the end of the movie, we wanted to make you question everything you’ve seen beforehand. But it was definitely an idea that came later in the process, and it helped, because if anyone in the audience had issues with Nick Fury falling for Quentin’s nonsense, it was a nice safety valve to have.

How much did Marvel divulge to you about the big twists in “Avengers: Endgame” when you started writing this movie?

McKENNA We were like, “Wait, who goes away? And how do they come back?” We didn’t actually see “Endgame” until the premiere — maybe if we’d known more in advance, we would have made a joke about Valkyrie riding a Pegasus, because you definitely want to reference that.

SOMMERS You’re given everything on a need-to-know basis.

McKENNA The two major things we knew were the five-year gap and the ramifications it would have for the people who did and didn’t get blipped away. And, obviously, the Tony of it all.

The shadow that Tony’s death casts over this movie almost makes him an alternate version of Uncle Ben from the Spider-Man comic books. When Tony bequeaths a powerful gift to Peter in “Far From Home,” it might as well come with a little note saying, “With great power comes great responsibility.”

McKENNA The other “Spider-Man” movies obviously dealt with Uncle Ben, and “Homecoming” hinted at it, but you’re right: In a lot of ways, the gravitas really comes from Peter’s relationship with Tony.

SOMMERS It’s assumed that there probably was an Uncle Ben and the pain of that loss is lingering there, but this gave everyone the chance to create a whole new friendship between Peter and his mentor, Tony, and to deal with the loss of that, which is a very powerful, emotional event in his life.

In the mid-credits tag, a posthumous video from Mysterio exposes Spider-Man’s secret identity to the world. That’s a pretty major shake-up for this character. Why introduce it now?

McKENNA We were challenged by the producers to come up with something that Peter sacrifices by the end of this movie, and when we hit upon that as a group, it became a very scary idea: “Oh, no, we can’t do that! Then it’s not a Spider-Man movie anymore!”

SOMMERS Ultimately, we realized that because it scared us, you have to run toward it.

McKENNA It’s such a bold maneuver that it became inevitable, particularly with a tricky character like Mysterio, who’s this dark father figure. From the grave, is he trying to give Peter his “I’m Iron Man” moment? It’s thrust upon him, but is this a lesson or a punishment?

Mysterio also frames Spider-Man for the crimes he’s been committing, which would start the next movie in a very different place.

McKENNA We were wondering, “Are we going as deep as we need to at the end of the movie?” We played with the idea that Peter is the one who sacrifices his identity out of necessity during the final battle, then it seemed more interesting if Mysterio tricks him into doing it, but any time we wrote a version where he was being revealed to the world in that battle, it felt like it diminished the victory. So before it became a tag, it was really just the end of the movie: Right as he feels he’s stepping up as Spider-Man, he has the rug pulled out from under him again.

SOMMERS We were definitely debating, should we just reveal who Spider-Man is, or should we frame him for something and turn him into a pariah? Ultimately, we decided that both was the way to go. It’s such a triumph at the end because he’s got the girl and finally earned a big swing through the city, so we want to knock him down as far as possible.

The biggest surprise of the movie is that the identity reveal is broadcast by J. Jonah Jameson, the Daily Bugle blowhard who was played by J.K. Simmons in the original “Spider-Man” films directed by Sam Raimi. Simmons reprises the role here, making him the first actor from a different set of films to join the current Marvel universe as the same character.

McKENNA Both of those ideas came together pretty quickly. I don’t know if it was [director Jon] Watts or someone else who said, “It should be the Daily Bugle, and it should be J. Jonah Jameson.” That idea has been lingering around since “Homecoming”: How do we insert our new version of J. Jonah?

SOMMERS There had already been some interest in possibly using J.K. Simmons when we brought J. Jonah back, so once it was decided that we were going to reveal Peter’s identity at the very end instead of the final battle, it all fell into place very naturally that J. Jonah would be involved.

McKENNA Something that had been floating through this entire movie was the idea of “fake news” and how can you believe everything you see? We had been toying with the idea that Mysterio would turn Spider-Man into a villain, just like he did in the comic books, and it felt like that then tied into this J. Jonah 2.0 as the Alex Jones of the MCU.

With newspapers on the wane, it’s amusing that J. Jonah Jameson has essentially become a YouTube personality.

McKENNA It’s the “Whiplash” version! It’s a little less comic-book — we’re taking him in a slightly different direction. But we’re excited that if this continues on and we get to work on the next one, hopefully, it’ll involve a lot of J.K.

Roku salaries revealed: How much the streaming company pays for key US jobs in product, engineering, and more

'The Lion King' 2019: These 2 Characters Unexpectedly Save the Movie From Utter Mediocrity