Home » Movies » Scary Movies Are Coming for You

Sick of “The Exorcist?” This Halloween season, the number of new and noteworthy horror films will make your head spin.

What’s especially refreshing is how many of these new stories are by women and people of color, two groups whose voices have been stifled in the horror genre for too long. Not a big horror fan? Many of these movies are as funny as they are scary.

Brandon Cronenberg’s second feature is a sci-fi-horror hybrid about an assassin (Andrea Riseborough) who inhabits the bodies of other people to be incognito when she kills her targets. Her mission doesn’t go quite as planned. In his Times review, Glenn Kenny called the film “a shocking work that moves from disquieting to stressful with ruthless dispatch.” 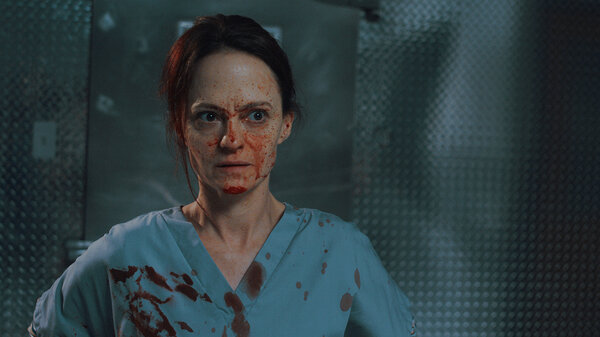 This horror comedy of errors, written and directed by Brea Grant, is about an overworked nurse (Angela Bettis), an organ trafficking ring and a kidney that goes missing one night at an Arkansas hospital. In his Times review, Ben Kenigsberg calls the film an “exploitation splatter comedy” with a “stellar airhead routine” from Chloe Farnworth as an incompetent organ harvester.

Five genre festivals, including the Brooklyn Horror Film Festival, collaborated on this new all-virtual lineup of movies and events. Highlights include the world premiere of Ryuhei Kitamura’s action-thriller “The Doorman,” starring Ruby Rose, and a “virtual fireside” with Nia DaCosta, the director of the coming “Candyman” reboot.

Turkish horror films are under the radar in the United States. Here to remedy that is Orcun Behram’s grim thriller, set in a dystopian Turkey, about the caretaker of a brutalist apartment complex that the government has wired for surveillance. The film is as much a political allegory about threats to freedom of speech as it is a David Cronenberg-style creepfest.

The holidays go to hell in this mega-gory possession thriller directed by Adam Leader and Richard Oakes. Brutal and blood-soaked, “Hosts” is about a demonic entity that takes over the bodies of a young British couple, who then gruesomely terrorize their neighbors on Christmas Eve.

‘Vampires vs. the Bronx’

Gentrification and its bloodsucking enablers are bad enough, but now the Bronx has to combat vampires too? That’s the timely premise behind this family-friendly horror comedy, directed by Osmany Rodriguez, about three kids who take up crucifixes and garlic to battle vampires stalking Arthur Avenue with bloodthirsty agendas.

‘The Wolf of Snow Hollow’

Jim Cummings wrote, directed and stars in this dark, droll horror comedy about a cop in a small mountain town who is on the hunt for a killer werewolf. Nestled in the mayhem is a surprisingly touching story about fatherhood. The film features the final screen performance by the Oscar-nominated actor Robert Forster, who died last year.

Zu Quirke makes her feature film debut with this unsettling thriller set in the cutthroat world of classical music education. Sydney Sweeney plays a young pianist who has nightmarish visions after she finds a dead classmate’s notebook. “Nocturne” is one of four films out this month as part of Welcome to the Blumhouse, a new film series that highlights scary tales told by diverse casts and filmmakers.

A global pandemic, a besieged apartment complex and vicious zombies called “screamers”: That’s the ghoulish outline of Johnny Martin’s apocalyptic thriller starring Tyler Posey and Summer Spiro. Donald Sutherland plays an eccentric, isolated neighbor who may or may not be a savior.

Originally scheduled for theaters, this screen adaptation of the beloved 1983 children’s book instead comes exclusively to HBO Max. Directed by Robert Zemeckis, the film features Anne Hathaway, Octavia Spencer, Stanley Tucci, Kristin Chenoweth and the voice of Chris Rock in the story of a boy, his kindly grandmother and their plans to foil the diabolical plans of a coven of child-hating witches.

Zoe Lister-Jones wrote and directed this remake of the popular 1996 teen horror fantasy about a coven at a Catholic high school. Cailee Spaeny, Lovie Simone, Gideon Adlon and Zoey Luna star as the teenage spell casters. Pam Grossman, a witch and host of “The Witch Wave” podcast, was hired as a consultant, so expect a script guided by legit witchery.

Gillian Jacobs and John Gallagher Jr. play parents who battle a malevolent presence that tries to attack their son via the child’s personal devices. Jacob Chase wrote and directed this tech-terror monster movie, based on his own creepy short film “Larry.”

'It's a Wonderful Life' Musical Coming From Paul McCartney