Freaks is a pungent sci-fi horror flick with multiple layers of misdirection. It took me half its length to figure out what was going on and the other half to work out what it might mean.

The last bit is easier than it looks: not much, except the film demonstrates with flair and a certain flamboyance its two creators are ready for work of a more substantial, and remunerative, nature.

Nothing wrong with that. In Hollywood, you either get noticed or die – which is to say, wait tables. Adam Stein and Zach Lipovsky were finalists on Fox's 2007 reality show On the Lot, a worldwide contest to find new filmmaking talent. Steven Spielberg was one of the producers. No question he would have loved these guys, who could qualify as a couple of "mini-mes". Freaks is a compendium of movie love, as much as it is a movie. 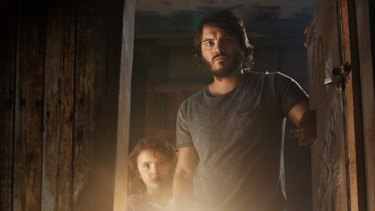 Emile Hirsch and Lexy Kolker are a father and daughter in hiding in Freaks.

Its success rests on an astonishing performance by Lexy Kolker, who was seven when the film was shot. Kolker is the spitting image of Drew Barrymore at the same age and she has a similar truth on screen: great vulnerability and emotional range and a blazing temper, which can unleash the character's dark superpower. Chloe (Kolker) has no idea she has this power. Her father has kept her locked away in a house for seven years, filling her with dread about the outside world. The people out there will kill us, says dad (Emile Hirsch). They practice lying about her identity, because you need to be able to lie convincingly to survive.

Chloe pines for her mother Mary (Amanda Crew), who appears to be dead – except that she keeps seeing her in her closet at night. She must be a ghost, Chloe tells herself. When she looks outside she sees a brightly coloured ice cream truck. Bruce Dern does a creepy turn as the ice cream man, Mr Snowcone, who would like to take her to the park.

It's clear Chloe and her father have a loving relationship, even if he appears to be a paranoid schizophrenic and something terrible happened to them a while back to produce his fear of the outside. Their world has a certain screwy, fetid logic, but then the directors start to mess with our heads, via some neat visual effects. There appear to be a number of dimensions of time and space here – and we're not quite sure which one is real.

In terms of theme, the idea is clever and flexible. These two are like refugees, hiding from the American border patrol; they are like Jews in Holland in 1940, hiding from the Nazis; they are simply "the other", in a society where difference can get you killed. Since we see so little of the world outside the house, we do not know if there is anything to fear. And since they take us deep inside Chloe's view of the world, which is so bruised by the need for maternal affection, we really don't know which way is up or down. All we know is the pain she feels.

Keeping the film centred on the house keeps the budget down. The visual effects are minimal, but Lipovsky's background in that area ensures good bang for their buck. Stein started as a film editor so the pacing is smooth. There's very little to improve on, except perhaps in the area of conviction.

Great performances do not automatically confer a sense that the ideas of the film matter to the people who made it. They have no shortage of ideas, just an inability to convince us they are questions of life and death. Kolker's performance makes it clear that they are for her. For these two young directors, they're more like a calling card, a stairway to the stars. That's understandable, but it stops the film from becoming truly wrenching, and therefore great, rather than just good.

Watch an Awkward and Funny Moment From ‘Downton Abbey’