Priyanka Chopra Jonas isn’t the kind to let a minute of her life slip away, even when life is on lockdown.

While others were perfecting their sourdough starters last spring, Chopra Jonas decided to write her first book — and finished it. As quarantine fatigue curtailed our enthusiasm for crafting and Kondo-izing, she was in London shooting the romantic drama “Text for You” alongside Sam Heughan and Celine Dion.

By the time a lot of us had been rendered bloblike, Chopra Jonas was in overdrive, simultaneously promoting three projects: her Netflix movie, “The White Tiger,” adapted from Aravind Adiga’s Booker Prize-winning rags-to-riches novel about a self-made Bangalore businessman; her memoir, “Unfinished,” which chronicles her 38 years, including her reign as Miss World and breakthrough into Bollywood and eventually Hollywood; and her new sustainable hair care line, Anomaly.

As if that weren’t enough, she was prepping to shoot “Citadel,” a spy series directed by the Russo brothers for Amazon, which had been delayed a year because of Covid restrictions.

Through it all, Chopra Jonas was still finding room for some self-care and shut-eye, “which has to be scheduled time, because otherwise I would never get sleep,” she said. In a phone call in late January from her home in London, Chopra Jonas tracked the recent routines and cultural items that are keeping her busy.

These are edited excerpts from the conversation.

In our profession, my routine is dictated by the schedule that my team decides for me, predominantly. So the only thing routine-y about my schedule is I always make sure I have at least eight hours of sleep. My coffee machine is in my bedroom, right by my bed. The first thing I do is press the Nespresso button and smell the aroma of coffee, and that’s how my eyes open.

Then I check out the news and scroll through Twitter usually still when I’m in bed. I need five or 10 minutes to orient myself to the fact that I’m waking up. On a languid day, maybe it would be half an hour. This ritual is ultimately what led me to “The White Tiger.” There was so much chatter around it in literary circles. I’m an avid reader. I try and pick up the books everyone’s talking about, because I don’t really have the luxury of time to discover my own favorites.

My days start with a workout, usually on Zoom with my trainer. I started getting consistent with working out during quarantine. I hate working out otherwise. I’m not one of those people who’s like, “Oh my gosh, I enjoy it so much that I need it.” I listen to Hindi rap, like Raftaar and Divine, while I work out. It’s alive and visceral.

I watched the inauguration, and I think I felt exactly what the world was feeling. It was a very emotional time for a lot of my friends and family in America, and I felt very excited about the fact that the country is stepping into the right direction in terms of leadership. Not only should leadership look like this, but also sound like this. As someone coming from a country who has had many females in high positions of power, it’s awesome to see the U.S. finally get their first.

My days for the past two weeks have been back-to-back with recording my audiobook and promo, and [together] it takes 12 to 13 hours a day. I filmed three talk show interviews — Kelly Clarkson, Lilly Singh and Ellen — and I recorded a few podcasts and did several phone interviews. I think I was one of the earlier people to commit to the fact that we’re going to be working off Zoom for a really long time. So I found a corner of my room with a fireplace where I do all my Zoom calls. 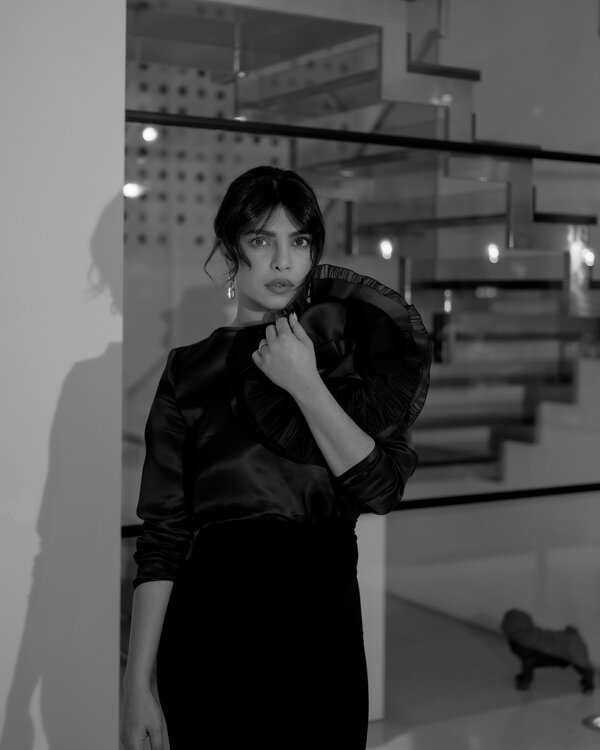 Before bed I always need a few hours to unwind, and this is usually when I watch TV or read. Right now I’m reading “Amnesty,” Aravind Adiga’s next novel. I obviously am a fan. This is based in Australia, and it’s about a Sri Lankan immigrant, and it’s a thriller from his perspective. I do love to get out of work mode and just enjoy content for what it is. But most of my reading I do with both [enjoyment and the idea of a project] in mind.

I haven’t been able to commit to a TV show because of how busy my schedule is. I recently finished “The Undoing,” “The Boys” and “Bridgerton” but I’m also really into movies after dinner. I’ve watched a lot of the Oscar contenders — “Sound of Metal,” “Da 5 Bloods,” “One Night in Miami.”

Finally I had some semblance of a morning in I don’t even know how long. I woke up by 10, had a quick workout and then I had luxurious brunch with my mom, who is living in London with me. She was here with my husband during the holidays so that we could be together. I felt safer with her around me. My husband left top of the year, but I didn’t let my mom go. So I’ve sort of kidnapped her right now.

My first call wasn’t until 2 — a prep call with the producers of “Citadel,” which I am so excited to start. Prep calls are usually character development, which is one of my favorite things. The most exciting job as an actor is when you have the ability to take someone off the page and really breathe life into them.

Then it was back to promo. Unlike normal junkets where you’re local and live with the media, we have been up early and late to hit markets all over the world. Tonight we ended with “The Late Show With Stephen Colbert” at 1 a.m.

I couldn’t sleep, because you know when you go beyond tired on the other side of the hill? That happened. Then I was on TikTok for hours. I’m a secret admirer, so I consume whatever they show me. It’s a lot of baby videos or doggy videos or kitten videos.

We got a quarantine pet, yes, we did! He’s Panda, and he’s a rescue. I got Nick a German shepherd for our anniversary last year, and my dog, Diana, who I’ve had for four years, she’s a rescue as well. So we had the two. But Nick’s parents were visiting and they brought their girls with them, and the house was full of four dogs, and it was so amazing that after Nick’s parents left, I was kind of feeling like, we need another dog. He’s a mix between an Australian shepherd and a husky. And he’s a punk. He deliberately defies you but he’s so adorable that you forget everything. He’s in L.A. with Nick at the moment, but they should be coming here sometime next month.

It was my last free weekday before I start “Citadel,” which I’ll be filming until next November. It was also release day of “The White Tiger.” Release day is filled with a roller coaster of emotions, but always with bright eyes and hope for a strong opening. I’m so proud to share this film with the world.

I did “Hot Ones.” Oh my God. I’ve done it before on Jimmy Fallon, and it almost killed me. But this time — and I love spicy food. I need hot sauce. I carry it everywhere — but some of the hot sauces are like poison. They’re insane how spicy they are. I literally felt like I was going to faint. I had to open the doors up and walk outside and eat ice cream and milk, and I was crying. Ghost pepper was at No. 4. So you could imagine what No. 10 was.

I did a viewing party for “The White Tiger” with a lot of my family and friends all on Zoom. It is such a provocative tale of something that all of us have become so desensitized to, which is this large division between the haves and the have-nots. And Covid specifically showed the world that disparity so glaringly. When is the last time you’ve driven past a homeless shelter or a homeless person and not done anything about it? A majority of the world lives in circumstances like that, so it’s really a sort of mirror into self-reflection. I’m very proud of the movie because it has social commentary, but at the same time it’s sarcastic, funny, dark and really clever.

'High Flying Bird' Sequel in the Works, According to André Holland