Nelly Kaplan, whose witty, satire-tinged French films about female empowerment and revenge made her a distinctive voice in a male-dominated era, died on Nov. 12 in Geneva. She was 89.

The Société des Réalisateurs de Films, the French filmmakers’ association, announced her death on its website. French news agencies, quoting a relative, said the cause was Covid-19.

Ms. Kaplan, who was born in Argentina, arrived in Paris in her early 20s and became both a filmmaking and a romantic partner of Abel Gance, the French director known for the innovative silent movie “Napoleon” (1927). In 1969 she drew acclaim with her first feature, “A Very Curious Girl.” (The French title was “La Fiancée du Pirate,” or “The Pirate’s Fiancée.”)

It starred Bernadette Lafont, an actress already well known from the New Wave films of Claude Chabrol and others, as Marie, a young servant who is preyed upon by men in her village until she turns the tables on them by charging for sexual favors and tape-recording the encounters, ultimately exposing the townspeople’s hypocrisy.

That film was the centerpiece of “Wild Things: The Ferocious Films of Nelly Kaplan,” a retrospective at the Quad Cinema in Manhattan in 2019 that helped fuel a new appreciation of her work and her characters. 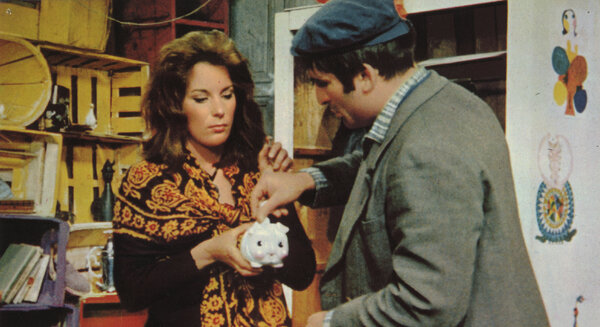 “While very much of its time, ‘A Very Curious Girl’ remains amazingly fresh after 50 years,” the film critic J. Hoberman wrote in The Times then. “Marie’s triumph is not just a victory for her sex and class but, given the explicitly xenophobic nature of the smug patriarchal order that she upends, a win for outsiders and outcasts of all varieties.”

Ms. Kaplan made only a few feature films after that, and none achieved the level of acclaim that her debut did. The film critic Joan Dupont, who secured a rare interview with her for Film Quarterly in 2018, said Ms. Kaplan had been something of an outcast in the French film world, struggling to secure funding for her movies, battling with censors and in general not being embraced by the film establishment.

“She was never granted a retrospective at the Cinémathèque,” Ms. Dupont said by email, referring to the venerable French cinema organization. “This stung, but Nelly was never going to be less than Nelly: She spoke her mind, stuck to her guns — she never won a popularity contest. A beauty and a brain, festive and generous, ambitious and outspoken, she had no time for niceties and didn’t mind not being loved.”

Ms. Kaplan was at times identified as part of the French New Wave, since she had cast actors known for New Wave films, but Ms. Dupont said that that was a mischaracterization.

“Nelly rode her own wave,” she said.

Nelly Kaplan was born on April 11, 1931, in Buenos Aires into a Jewish intellectual family. She studied economics at the University of Buenos Aires, but, as she put it in the interview with Ms. Dupont, “I was considered a rebel, whatever that means.” Her father, she said, told her, “Change or leave,” and so she left, boarding a ship for Paris with $50 in her pocket.

She arrived there in January 1953 knowing no French. She used some of her money to buy a radio. “I listened to it nonstop,” she told the film journal Another Gaze in 2016. It helped her learn French.

She also had a letter of introduction to the Cinémathèque Francaise from the Cinemateca Argentina in Buenos Aires, where she had been a regular. That got her a meeting with Henri Langlois, the French organization’s co-founder. Mr. Gance, more than 40 years older than Ms. Kaplan, spotted her at a Cinémathèque event and asked Mr. Langlois for an introduction.

She became a valued collaborator with Mr. Gance as well as lover and muse, serving as a co-writer and assistant director on the 1960 Gance film “The Battle of Austerlitz,” among other projects.

“I was an A.D. and did all the dirty work,” she told Ms. Dupont, recalling her work on “Austerlitz.” “But,” she added, “I’m grateful that he threw me into the water. Now, nothing scares me; there’s always a solution.”

Ms. Kaplan began directing her own documentary shorts. In 1966, when Pablo Picasso was the subject of a major exhibition at the Grand Palais in Paris, she received permission to film the works as they arrived and were put on display. The footage led to an almost hourlong documentary, “The Picasso Look,” which brought her some attention. She rented a theater to show it to Picasso himself, and he apparently was appreciative. When “A Very Curious Girl” came out a few years later, he returned the compliment, calling the movie “insolence raised to the status of art.”

She also wrote novels and short stories, often in a surrealist vein, as well as magazine articles and screenplays for television movies. She and her longtime partner, Claude Makovski, a producer on many of her films, had homes in France and Switzerland. He died in August at 84.

Ms. Kaplan’s movies were sometimes labeled feminist, but she did not welcome the label for herself or care for what she called the groupthink of 1970s feminism and its activism through petitions.

“I don’t like people telling me to sign things,” she told Ms. Dupont. “I like living on a branch in the jungle. Feminism doesn’t interest me. I’m not a misogynist, but in feminism there’s a hatred of men, and I can’t accept that.”

That said, she was all for female empowerment. In the 2016 interview with Another Gaze, Ms. Kaplan had some straightforward advice for women.

“You mustn’t listen to idiots who tell you that women were created to support men and things like that,” she said. “If you believe in yourself, then no matter what happens, you’ll go places, you’ll get places. And if someone tells you to give up, then you’ve got to chase them off with a pickax.”

‘Tiny: The Life of Erin Blackwell’ Review: A Troubled Life Goes On