Monte Hellman, whose terse action films, epitomized by the 1971 road movie “Two-Lane Blacktop,” made him a cult hero of the American independent film movement, died on Tuesday in California. He was 91.

His death was confirmed by his daughter, Melissa, who said he had been admitted a week before to Eisenhower Health Hospital in Palm Desert, Calif., after a fall at his home.

Mr. Hellman was the unknown director of several low-budget films for Roger Corman, most of them with Jack Nicholson in a starring role, when Esquire magazine put “Two-Lane Blacktop” on the cultural map.

In an act of cultural provocation, Esquire devoted most of its April 1971 issue to the film, about a cross-country car race. The cover showed a young woman hitchhiking on a desolate stretch of road, with two muscle cars just visible in the distance behind her, poised to race. “Read it first!” the magazine’s cover trumpeted. “Our nomination for the movie of the year: ‘Two-Lane Blacktop.’”

Inside, the editors ran the movie’s entire script, by the underground novelist Rudy Wurlitzer from an idea by Will Corry, who was also given screenwriting credit. It was a series of laconic verbal exchanges between obscurely motivated characters identified only as “The Driver” (played by the singer James Taylor), “The Mechanic” (Dennis Wilson of the Beach Boys), “the Girl” (Laurie Bird) and “G.T.O.” (Warren Oates), named for his car.

The Driver: “Yeah, that’s where we are, all right.”

The film, shot entirely on locations from Arizona to Tennessee, has been called the ultimate American road film. 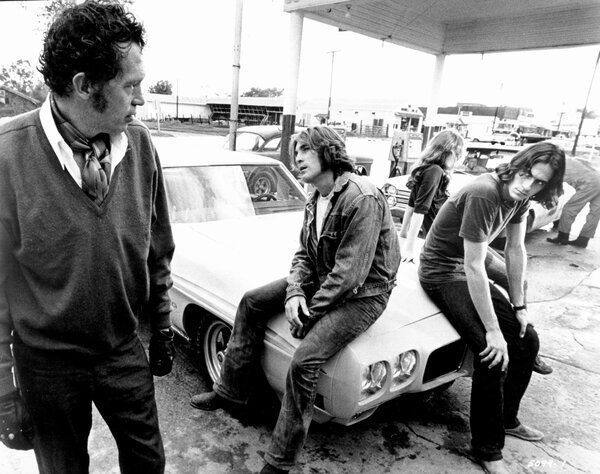 “Their universe is one that’s familiar in recent American films like ‘Bonnie and Clyde,’ ‘Easy Rider’ and ‘Five Easy Pieces,’” the critic Roger Ebert wrote in The Chicago Sun-Times. “It consists of the miscellaneous establishments thrown up along the sides of the road to support life: motels, gas stations, hamburger stands. The road itself has a real identity in ‘Two-Lane Blacktop,’ as if it were a place to live and not just a way to move.”

Made for $850,000, and intended to capitalize on the runaway success of “Easy Rider,” the film struggled at the box office after Lew Wasserman, the head of Universal, refused to promote it. Esquire sheepishly included its endorsement of the film in its annual Dubious Achievement Awards.

“We thought it was good publicity,” Mr. Hellman said of the Esquire issue in an interview with The Los Angeles Times in 1999, when “Two-Lane Blacktop” finally made it to video. “In hindsight, we wouldn’t have done it. I think it raised people’s expectations. They couldn’t accept the movie for what it was.”

French film critics did, and their enthusiasm spread to the United States. As the 1970s became recognized as a golden age of independent film, the film’s reputation, and its director’s, soared. In 2005, the journal Cahiers du Cinéma pronounced it “one of the greatest American films of the 1970s.”

Monte Himmelbaum was born in Greenpoint, Brooklyn, on July 12, 1929, and grew up in Albany, N.Y., where his father ran a small grocery store. When he was s6, the family moved to Los Angeles.

He majored in speech and drama at Stanford, where he directed radio plays, and after graduating in 1951, he studied film at U.C.L.A. Around this time, he changed his last name.

In 1952, Mr. Hellman helped found the Stumptown Players, a summer theater troupe, in Guerneville, Calif. Carol Burnett was a member. He directed numerous productions and filled in as an actor when required.

His first marriage was to one of the theater’s actresses, Barboura Morris. The marriage ended in divorce. He was married three other times, his daughter said. He is survived by a brother, Herb; and two children, Melissa and Jared.

In 1955, he moved to Los Angeles, where he began working as a film editor at ABC Studios and on the television series “The Medic.” Still drawn to the theater, he founded a new troupe, the Theatergoers Company, which staged the Los Angeles premiere of Samuel Beckett’s “Waiting for Godot,” which Mr. Hellman presented as a Western.

After the company’s theater was converted into a cinema, Mr. Corman, one of the company’s investors, invited Mr. Hellman to direct a low-budget horror film, “The Beast From Haunted Cave,” which Mr. Hellman later described as “a bit like ‘Key Largo’ with a monster.”

As part of Mr. Corman’s loose army of young and hungry actors and filmmakers, Mr. Hellman helped edit the biker films “The Wild Ride,” during which he became friends with Mr. Nicholson, and “The Wild Angels.” He directed part of “The Terror” with Francis Ford Coppola and the opening sequence of Mr. Coppola’s “Dementia 13,” in which a hypnotist warns that audience members with a weak heart should not watch the film.

His contribution to “The Terror” caught the attention of Robert Lippert, an executive at 20th Century Fox, who sent him to the Philippines with Mr. Nicholson to make “Back Door to Hell,” a war film, and the adventure thriller “Flight to Fury,” whose screenplay Mr. Nicholson wrote.

Mr. Hellman reunited with Mr. Nicholson on two existential westerns, shot in six weeks in the Utah desert, that have added luster to his résumé. “They are sparse, austere, stripped of all necessary language, stripped and flayed until there is nothing left but white bones drying in the sun,” Aljean Harmetz wrote of the films in The New York Times in 1971.

“Ride in the Whirlwind,” with a script by Mr. Nicholson, told the story of three cowhands who find themselves on the run after encountering a gang of bandits wanted for murder. In “The Shooting,” written by Carole Eastman, who later wrote the script for “Five Easy Pieces,” a former bounty hunter played by Mr. Oates pursues a mysterious figure on the run, dogged along the way by a sinister gunslinger played by Mr. Nicholson.

“I had to shoot from the hip,” Mr. Hellman told Uncut magazine in 2003. “It became a way of life after that. I got confidence in myself. I felt I could walk onto a set and the set would tell me what to do.”

Mr. Hellman made his last film for Mr. Corman, “Cockfighter,” in 1974 and worked sporadically thereafter, while teaching in the film directing program at the California Institute of the Arts. He directed the noir western “China 9, Liberty 37” (1978), with Mr. Oates and the director Sam Peckinpah in a rare acting role, and the Conrad-esque “Iguana.” When the director Paul Verhoeven fell behind schedule on the 1987 film “RoboCop,” Mr. Hellman was called in to do the action scenes.

He returned to his beginnings in the horror genre with the 1980s slasher film “Silent Night, Deadly Night 3: Better Watch Out!” before staging a comeback of sorts with the neonoir “Road to Nowhere” in 2010.

The film won a Special Golden Lion at the Venice Film Festival. The award was presented by Quentin Tarantino, who introduced Mr. Hellman as “a great cinematic artist and a minimalist poet.” Mr. Hellman had been an executive producer of Mr. Tarantino’s breakthrough film, “Reservoir Dogs.”

“I have a reputation for ‘fighting the system,’ ‘not selling out,’ ‘doing my own thing,’ etc.,” Mr. Hellman told the reference work World Film Directors in 1987. “In reality, I have always been a hired gun. I have usually taken whatever job came my way.”

Emma Stone Had a 'Meltdown' Filming a Scene With Ryan Gosling

'Toy Story 4': This Touching Tribute Had Fans Reaching for the Tissues