Home » Movies » Million-pound question: why save Secret Cinema while real cinemas are in ruins?

Film fans experienced a collective meltdown on Monday when it was revealed that Secret Group, the company behind immersive movie experience Secret Cinema, had received almost a million pounds in aid as part of the government’s culture recovery fund, while more affordable and accessible venues had been turned down.

The fund, announced by Rishi Sunak after widespread criticism that Covid-19 bailouts weren’t doing enough to protect the arts, awarded its first wave of grants this week: £257m split between 1,385 arts organisations. Big winners included Manchester’s Mission Mars, responsible for numerous venues and events in the city (£1m), London’s Wigmore Hall (£1m), the Royal Philharmonic (£996,702) and Brighton and Hove city council (£990,000). However, it was the awarding of £977,004 to the Secret Cinema franchise that raised eyebrows.

Founded in 2007 by entrepreneur Fabien Riggall, Secret Cinema has become known for its immersive screenings, recreating the worlds of much-loved movies such as Star Wars, Blade Runner, Back to the Future and The Shawshank Redemption. Recently it tackled television for the first time, with a well-received experience based around the Netflix show Stranger Things. Secret Cinema events are huge productions, with elaborate sets and dozens if not hundreds of performers. The Stranger Things presentation boasted a recreation of the series’ Starcourt Mall set and an impressive 360-degree projection of clips from the show, augmented by actors and stunt performers.

28 Days Later at Secret Cinema: a bloodthirsty attack on the wallet

A 2015 production of the Empire Strikes Back cast visitors as rebel agents, acting out the entire first Star Wars movie in a disused print factory converted to look like the Death Star and the planet Tatooine, before settling back to watch its sequel. The events are hugely impressive operations and terrifically good fun. They are also hideously expensive. The cheapest ticket for Stranger Things was £49, the most expensive £139. This is out of the price range of many people.

The whopping grant awarded to Secret Group, the ninth largest of 1,385 organisations, quickly raised hackles. The problem isn’t so much the funding of Secret Cinema per se – it’s an arts organisation missing out on business during the pandemic, which is what the fund is for. What many object to is the size of the grant, particularly at a time when affordable cinemas – including London’s Peckhamplex, which charges just £4.99 for all tickets – are being forced to close until further notice. Independent cinemas are covered under the scheme by a £30m grant distributed by the BFI, but so far only 42 theatres have received money. Those 42 venues are sharing a total of £650,000, around two-thirds the amount granted to Secret Cinema, or Wigmore Hall. It has given the impression that Arts Council England and the BFI are favouring highbrow and metropolitan events over affordable grassroots venues. 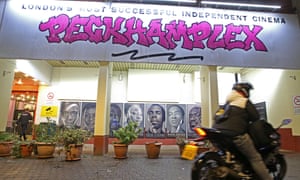 It’s easy to see where the bitterness comes from. While some of the most powerful organisations enjoyed £1m grants, two-thirds of applicants were turned down under the scheme’s strict criteria. Manchester’s Frog & Bucket comedy club says it was denied funding on the grounds that it was not “culturally significant and/or contributing to provide cultural opportunity in England” despite being one of the few venues in the UK currently offering performers work. The club is now desperately trying to fundraise privately. Applicants to the culture recovery fund are required to prove they were “viable businesses” but Secret Cinema, despite employing volunteers, has reported pre-Covid losses in the millions. All of which has created the impression of a double-standard: that bigger organisations are being granted a substantially bigger slice of the pie.

‘Cinema brings hope in a way laptops cannot’: what readers miss most about the movies

There may be some comparison of apples with oranges here: Secret Cinema, which is essentially a giant theatre production with a film shown at the end, and the likes of Peckhamplex or Cineworld – which also announced it was closing its venues until further notice – are very different ways of consuming movies. But critics cannot be blamed for feeling resentful when the disparity in funding is so wide. A family of five can see a blockbuster at Peckhamplex for £25, half the cost of the cheapest single ticket to Secret Cinema. Grassroots cinemas provide a valuable and, crucially, affordable escape from the grim reality pandemic life. Perhaps such venues deserve to be a little higher on the government’s list of cultural priorities.

'Godzilla: King of the Monsters' Final Look Gives Away All the Cool Monster Fights