Everyone on the set of Ma Rainey’s Black Bottom remembers the day. An adaptation of August Wilson’s acclaimed play of the same name, the film revolves around a recording session for the titular blues singer (played by Viola Davis) as tension come to a head with her band (Colman Domingo, Michael Potts, Glynn Turman and the late Chadwick Boseman).

There’s a moment late in the film in which Boseman’s Levee gets into a heated argument with his bandmate, Cutler (Domingo), about the latter’s belief in God. The players had run through it a number of times, with Boseman performing the entirety of his speech even in rehearsals. “He went in. He always went in,” Domingo tells ET. “I think that he needed to start getting it in his body.”

Then it came time to film it. “There was just something crackling in that room that day,” Domingo recalls. “He sort of stopped midway and something in me told me to tell him to keep going. I basically just started yelling, ‘Tell me, tell me, tell me!’ […] And he roared. It was a whisper, and then it was a roar. He just exploded with that quiet rage in his eyes of all those questions those lines have, those questions about God and God’s will.”

“Afterwards, we just hugged each other,” he says. “Two grown men, and we just stood there hugging each other. I looked over at Glynn, he had tears in his eyes, and Michael as well. We didn’t know what just happened, but we knew something was in the room. I think those are those moments that you believe the divine resides. Whatever that was, I look back in hindsight and I hope that day, that we were there for Chad in every ounce of whatever he was struggling with.” 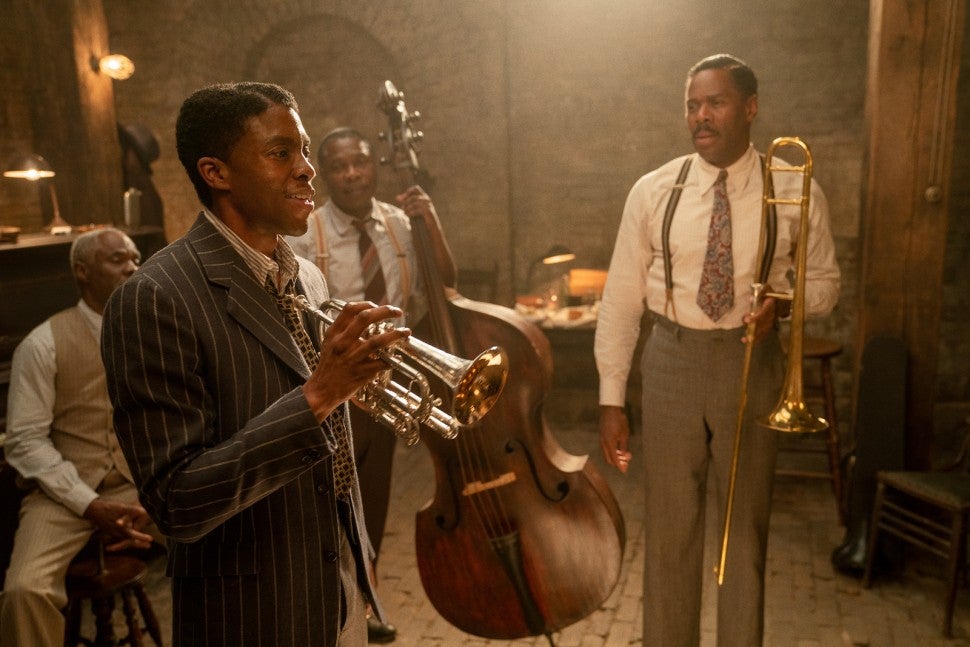 Ma Rainey marks Boseman’s final film, as the actor died in August at age 43 following a years-long battle with cancer. None of his co-stars were aware of what he was going through while he was shooting their movie. “You look back at it in hindsight, and you realize how much more personal that was for him,” Potts reflects.

“Now, looking back, you saw his makeup artists and his hairstylists who were all praying over him and meditating over him and you wondered, ‘OK, maybe that’s what he requires to work, to feel centered,” Davis says. “All of it makes sense now. But that’s the only part of it that makes sense.”

The film is a natural addition to the legacy Boseman leaves behind, having spent his career portraying dynamic, exceptional Black men. And while Ma Rainey may earn the actor his first-ever Oscar nomination — recognition that is no less warranted posthumously — for those who worked closely with him, even beyond what you will see onscreen, they remember the man.

“There was nothing about Chadwick that was anything other than a life force,” adds Davis, “that was anything other than bringing his utmost to the work. The dedication. The integrity. It’s hard for me to see his life tragically. It just really is. He’s one of those people you meet every once in a lifetime that are focused on every single moment. Every single moment is intentional.”

Days of our Lives time jump: When should fans tune in for the iconic event?