Lynn Stalmaster, an empathetic and tenacious casting director who altered the careers of hundreds of actors, including John Travolta, Jeff Bridges and Christopher Reeve, and cast hundreds of Hollywood films and television programs, died on Feb 12. at his home in Los Angeles. He was 93.

The cause was heart failure, said his son, Lincoln.

Billy Wilder, Robert Wise, Hal Ashby, Mike Nichols, Sydney Pollack and Norman Jewison all relied on Mr. Stalmaster’s keen ability to discern the inner life of a character and match it to the thousands of actors who inhabited his mental Rolodex. This alchemical process, as Tom Donahue, the filmmaker behind “Casting By,” a 2012 documentary about the craft, put it, raised Mr. Stalmaster’s work to a high art.

“Lynn had a wonderful gift,” said Mr. Jewison, the director and producer of films like “In the Heat of the Night” and “Fiddler on The Roof,” both of which were cast by Mr. Stalmaster. Mr. Jewison was the first filmmaker to give a casting director his own film credit when he had Mr. Stalmaster listed on “The Thomas Crown Affair,” released in 1968.

“I was always encouraging him to find offbeat people,” Mr. Jewison said. “For ‘Fiddler on the Roof,’ I had to find actors who could speak Russian. Lynn found them in San Francisco, where there was a big Russian community. None of them were actors. He was so ingenious. And he was very good at reading with actors. He could keep them calm and secure.”

Once a shy teenager who had trained as an actor and been in the trenches of auditions in the 1950s, working in television and on radio, Mr. Stalmaster was attuned to the actor’s experience and became a fierce advocate for those he believed in. After meeting an 18-year-old John Travolta, he pushed for him to get the role that eventually went to Randy Quaid in “The Last Detail,” the Hal Ashby film, starring Jack Nicholson, that came out in 1973.

It was a dead heat between the actors, Mr. Travolta recalled in a phone interview, but Mr. Quaid’s physical presence was more akin to the character’s, as Mr. Ashby and Mr. Stalmaster told Mr. Travolta in a midnight phone call praising his work. 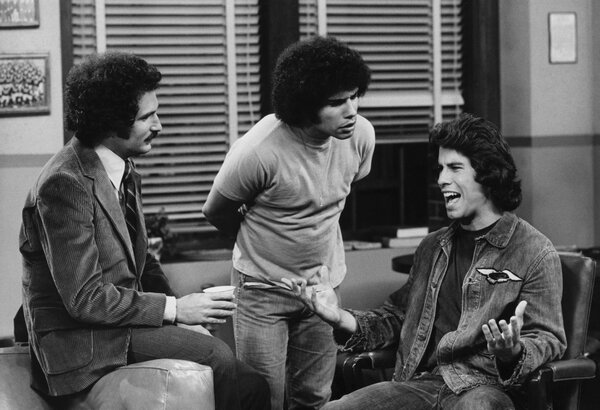 At the time, Mr. Travolta was doing theater and commercials in New York, but Mr. Stalmaster so believed in him that he hounded him for two years. When a role came up for a character on a comedy television pilot set in a Brooklyn high school, Mr. Stalmaster pressed him to turn down a lead part in a Broadway show and return to Los Angeles for an audition.

He got the part — what proved to a career-making turn as the swaggering punk manqué Vinnie Barbarino in a show that would find its own place in television history: “Welcome Back, Kotter.”

“He was quite determined,” Mr. Travolta said of Mr. Stalmaster. “He did not let them consider anyone else. After ‘The Last Detail,’ he had told me: ‘Do not worry. This will happen.’”

Mr. Stalmaster had a hand in countless other careers.

He nudged Mike Nichols to cast a young Dustin Hoffman in “The Graduate.” LeVar Burton was in college when Mr. Stalmaster cast him as the lead in what became in 1977 the hit television series “Roots.”

Geena Davis had trained as an actress but was working as a model when Mr. Stalmaster cast her in a minor role in “Tootsie,” Sydney Pollack’s 1982 romantic comedy starring Mr. Hoffman. It was her first audition, and the role would be her film debut.

After seeing Christopher Reeve in a play with Katharine Hepburn, Mr. Stalmaster suggested him for a small part in “Gray Lady Down” (1978), Mr. Reeve’s first film role, and then successfully lobbied for him to be the lead in “Superman,” released that same year.

“Lynn understood the actor’s process and the actor’s plight,” said David Rubin, a fellow casting director and president of the Academy of Motion Picture Arts and Sciences. (Mr. Stalmaster was his former boss and mentor.) Mr. Stalmaster’s career, he said, showed that “being a success in Hollywood and being a mensch are not mutually exclusive.”

In 2016 Mr. Stalmaster became the first — and so far, only — casting director to receive an honorary Academy Award for his body of work. At the Oscars ceremony, Mr. Bridges recalled how Mr. Stalmaster had jump-started his own career back in the early 1970s. At the time, Mr. Bridges was in his early 20s and trying to figure out if he wanted to make a life in the business when Mr. Stalmaster offered him a part in “The Iceman Cometh,” John Frankenheimer’s 1973 film based on the Eugene O’Neill play.

“This is some heavy stuff,” Mr. Bridges remembered thinking, as he told the awards audience. “It scared the hell out of me. I didn’t want to do it, to tell you the truth. I didn’t think I could pull it off.”

But he did, and the experience — terrifying but also joyful, he said — made him realize that he could make a life in acting. “Gotta thank you, man,” Mr. Bridges said, nodding to Mr. Stalmaster, “for heading me down that road. Lynn Stalmaster is the Master Caster.”

Lynn Arlen Stalmaster was born on Nov. 17, 1927, in Omaha, Neb. His father, Irvin Stalmaster, was a justice of the Nebraska Supreme Court; his mother, Estelle (Lapidus) Stalmaster, was a homemaker. Lynn had severe asthma, and when he was 12 the family moved to Los Angeles for its temperate climate.

He became interested in theater and radio as a student at Beverly Hills High School, and, after serving in the Army, earned bachelor’s and master’s degrees from the University of California School of Theater, Film and Television in Los Angeles.

Mr. Stalmaster had roles in a few films, including “Flying Leathernecks,” a 1951 John Wayne picture, and a day job as a production assistant to Gross-Krasne, a company that in the early 1950s made films for television. When its casting director retired, he was promoted to the job and soon opened his own agency.

“I would spend the days meeting new actors, all these great new talents,” he said in “Casting By,” the documentary. He was working on “Gunsmoke” and other hit television shows in 1956 when Robert Wise, the director who would make “West Side Story” and “The Sound of Music,” asked him to cast “I Want to Live,” the 1958 film starring Susan Hayward based on the story of Barbara Graham, a prostitute sentenced to death row.

Mr. Wise wanted actors who looked like the actual characters in Graham’s life. It was Mr. Stalmaster’s big break, he recalled, as he found new faces to round out the cast, giving the movie “a verisimilitude, the truth” the director wanted to achieve.

His marriage to Lea Alexander ended in divorce, as did an early, brief marriage. In addition to his son, Lincoln, Mr. Stalmaster is survived by his daughter, Lara Beebower; two grandchildren; and his brother, Hal.

Mr. Stalmaster’s kindness was as much an element of his art as his matchmaking abilities, Mr. Rubin said. But he was no pushover, and he was enormously persuasive, “firm in his creative point of view,” Mr. Rubin said, “but extremely skillful at convincing others that it was actually their idea.”