The last time Kurt Russell and Goldie Hawn headlined a movie together, the Berlin Wall was intact and the rescue of Baby Jessica dominated the news.

It would take more than 30 years after their 1987 comedy “Overboard” for the pair to team up onscreen again: tentatively, at first, with Hawn’s brief cameo in Russell’s 2018 Netflix family holiday film, “The Christmas Chronicles,” and now in delightful full force for the Chris Columbus-helmed sequel, “The Christmas Chronicles: Part Two” (Netflix, Nov. 25). This time around, Hawn’s Mrs. Claus is a central figure opposite Russell — embodying, as she puts it, “an up-to-date Santa, who’s kind of sexy” — as they help two kids thwart a troublemaker’s North Pole schemes.

Portraying Yuletide royalty suits the real-life couple of 37 years. After meeting on a film set in 1966, they eventually began dating in 1983 while shooting “Swing Shift” and quickly formed something of an A-list Brady Bunch. Never married, they raised the actors Kate and Oliver Hudson — Hawn’s children from her marriage to Bill Hudson — who lovingly refer to Russell as “Pa.” The couple also have a son together, the actor Wyatt Russell. (Kurt has another son, Boston Russell, from a previous marriage.) 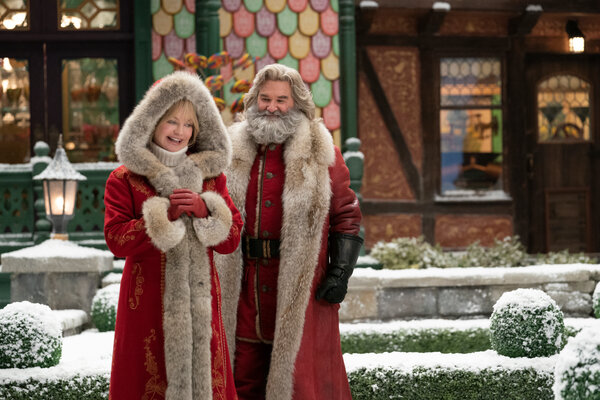 More recently, Hawn, who turns 75 on Nov. 21, and Russell, 69, have been leaning on each other during the pandemic, taking masked strolls around Los Angeles and filming energetic at-home Instagram videos — highlights include Russell tickling Hawn during a “laughing challenge” and Hawn shimmying to Outkast’s “Hey Ya” in the kitchen. “I like to dance with Goldie every once in a while, but I can’t tell you how little I care about social media,” Russell said.

For our October video chat, the two were perched on the patio of their Pacific Palisades home. Russell’s transitional lenses darkened in the afternoon sun; Hawn occasionally paused to make kissing noises at a pet dog running astray or to rub Russell’s back in a bid to get him to change the subject. They could be the grandparents next door, if the grandparents next door also happened to have stars on the Hollywood Walk of Fame.

The couple spoke about “The Christmas Chronicles: Part Two,” the state of Hollywood and why they think celebrities shouldn’t always air their opinions. Here are edited excerpts from our conversation.

This is the first time you’ve co-starred together since “Overboard.” What took so long?

HAWN Material! Really, it’s about the material, and it just didn’t come along.

RUSSELL I thought we’d work together much sooner than this, but Goldie and I are pretty choosy. And generally, Goldie Hawn movies and movies that Kurt Russell is in are pretty different things.

RUSSELL It’s not mandatory just because you live with someone, you love someone and you enjoy working together that you should do 10 or 15 movies together.

Chris Columbus has said that he wanted Kurt to be a sort of “superhero Santa.” Goldie, did you have any notes around what direction to take Mrs. Claus?

HAWN To be honest, I didn’t quite know. My instinct was that she was very benevolent, very kind, and Chris gave her a little bit more gravitas. It wasn’t as pixie-esque as I may have seen her.

RUSSELL In the first movie, Mrs. Claus became like Columbo’s wife. What’s fun about it is that she’s a mysterious character. She’s not just a sweet old lady who bakes cookies.

She’s only referred to as “Mrs. Claus” in both films. Does she have a first name?

RUSSELL She does have a first name, and we will never know it for a reason.

HAWN And that reason is in [Kurt’s] mind. [Laughter]

Santa and Mrs. Claus communicate with the elves by speaking Yulish, an elvish language created specifically for these films. Was that a challenge?

RUSSELL There’s a guy who writes it out phonetically and then you read it. We have no idea what we’re saying!

HAWN He says it’s a language, but in my mind it’s just sounds.

RUSSELL It’s not to be taken lightly. I’ll never forget when I saw “The Passion of the Christ” and went, “Mel discovered something that nobody figured out for all this time we’ve been making movies.” If you do anything that’s historical, especially the Bible, and you do it in an original language, it gives it a sense of authenticity. And when I saw that, and I read this script, I thought, elvish will give this a sense of authenticity.

What’s the dynamic like now when you work together? Did you go full method as Mr. and Mrs. Claus?

HAWN I left Mrs. Claus in her outfit. I hung it up on a hanger, and we went and had a cocktail and ate mushroom soup and that’s pretty much it. [Laughter]

RUSSELL We’re pretty old school. We do what we do at work, and then when you come home it’s not ruling your life.

HAWN The really fun part was that it was just the two of us in the makeup trailer. We were always right next to each other. And your makeup guy always had candy.

Christmas at the Hawn-Russell home seems like a big deal in real life, too.

HAWN I just can’t even tell you; it’s more than Christmas. This year, we’re going to be here, but normally we’re in Aspen. It’s a fantasy: the snow and the kids and all the stockings hanging from the fireplace. And Kurt in his Santa suit——

RUSSELL I’m very careful about what I say about this because we have grandkids who will see this stuff.

RUSSELL Right, right. After we have Christmas Eve dinner we always have somebody read “The Night Before Christmas,” and then we track Santa’s movements on the app. Right after that, you start getting things in shape because at any point he can show up.

Goldie, you were raised Jewish. Do you still keep any Hanukkah traditions?

HAWN Growing up, we’d light candles for Hanukkah, but I think my mother stopped lighting them because I was on the phone once, and I backed up to the Hanukkah candles. You know the wall phones back in the day? I had wrapped myself in the cord, and I caught on fire. I literally burned my robe and my back. It’s like, Baruch atah …. My mom came, and they unraveled me and, thank God, I’m fine.

Is the plan to keep reteaming on more “Christmas Chronicles” films?

RUSSELL We have no idea what Netflix wants to do there. I’ve never been big on sequels, but that was 50, 40, 30 years ago. Now sequels aren’t even sequels anymore. We’ve just cyclically found our way around to making television. You go to the movies and you’re seeing television because there’s a serial aspect to it.

You’ve seen the industry go through a lot of changes. What are your thoughts on the state of Hollywood in 2020?

HAWN We’re all trying to figure out what to do. I mean, when you look at how AMC has only so much money to exist before it goes away. When you see that big screen and people are in there engaging, there’s nothing like it. It makes me very melancholy to know that that could be over.

However, there’s more content now than ever, and not only that, there’s a place for content. We’re looking at incredible talent. Like “Succession,” the acting is amazing. But the one thing I wonder about all of that is will there be any movie stars? That thing of the old days when there were these glamorous movie stars and people that you just couldn’t wait to go see. I don’t know if that will happen again. What do you think?

RUSSELL I think the question is will there be an arena for that? Without the arena, those movie stars don’t happen. That cultural aspect doesn’t happen.

Speaking of an arena, Kurt, you’ve said in the past that celebrities shouldn’t really weigh in on politics. Do you still feel that way?

RUSSELL Totally. I’ve always been someone who felt we are court jesters. That’s what we do. As far as I’m concerned, you should step away from saying anything so that you can still be seen by the audience in any character. There’s no reason entertainers can’t learn just as much as anybody else about a subject, whatever it is. But I think that what’s sad about it is that they lose their status as a court jester. And I’m a court jester. That’s what I was born to do.

RUSSELL A court jester isn’t always funny. A court jester is the only one who can walk into the castle and put the king down as long as he doesn’t hit too close to home. I think that’s been a big, important part of all cultures throughout history, and I’d like to see it stay in ours.

HAWN But we did have a president who was an actor, Ronald Reagan.

RUSSELL Like I said, actors can learn as much as anybody else can.

HAWN Well, I’m just saying Reagan definitely was a well-known actor. I think it’s a personal choice whether you want to get into that. The one thing I don’t agree with is that just because we have a platform we always have to use it. That is our choice.

HAWN I really don’t have anything that I’m dying to do. I want to live a happy life, and I have that. I want to be able to go places, but right now, we can’t do that. If a movie comes along and it’s great, that could be fun. Other than that, I want to be with the grandkids.

RUSSELL It’s still fun to act. I don’t know why that is. By now, it shouldn’t be.

HAWN I think there’s a reality here, and the reality is not so much for Kurt or for certain kinds of men who do certain kinds of movies. But for people that had careers such as mine, you have to get real. There is a finite amount of time that you get to do what you want to do.

RUSSELL I’m honestly more interested in the kids’ careers than what’s going on in mine.

HAWN Oliver is doing a pilot for a series, and maybe also my grandson. So if it works out, I said, “Is there a mother who comes around every now and then? Anybody want to hire me as Oliver’s mother and Bodhi’s grandmother?” So, I’m just looking for the fun and not the career. I’m so grateful to have had the career that I have.

RUSSELL You’ve had a pretty good one.

It sounds like your grandkids will continue the acting tradition, too.

HAWN There is no doubt about it. It’s pretty amazing how those genes just keep moving on.

RUSSELL There’s only a few families in history that have as many people in it that are at the level that our family is. It’s not something we promote. It’s just something that if it comes to them and they want to do, then they do it.

You’ve both talked about not getting caught up in the industry, despite your successes. How has that approach shaped your lives?

HAWN In terms of our family, we tried to not work at the same time. But sometimes we were gone. [In the 1990s] Kurt was gone for five months during “Backdraft,” so everybody missed Kurt. I was gone almost six months when I was doing “Everyone Says I Love You” and “The First Wives Club.”

RUSSELL We did the best we could, and I think our kids benefited from the good decisions, and they obviously didn’t benefit from the decisions that were either bad or didn’t turn out. It’s life.

HAWN I mean, you’ve got to have something to go to a psychiatrist about. [Laughter]