At the Plaza de las Americas in Washington Heights, fruit and vegetable vendors usually sell produce until dusk. But on Wednesday, it was transformed into a replica of any other block in the neighborhood. There was a mock bodega, decorated with three Dominican flags that hung from an awning, a faux fire hydrant and a plastic fruit stand. Underneath the entire set ran a yellow carpet.

The reproduction served as a backdrop for the luminaries attending for the premiere of “In the Heights,” the big-screen adaptation of Lin-Manuel Miranda and Quiara Alegría Hudes’s Tony-winning Broadway show. The sunny carpet welcomed the cast and crew back to the Upper Manhattan neighborhood where it was filmed. The premiere, which also served as opening night of the 20th Tribeca Festival, was held at the United Palace, a majestic 91-year-old theater with a projection system that, years earlier, before his success on Broadway, Miranda had helped raise money to buy and then helped install.

While the actors, producers and executives streamed down the yellow carpet, pausing for pictures with photographers and interviews with the news media, the real Washington Heights whirred behind them. Waitresses at Malecon, a Dominican restaurant across the street from the plaza, peered outside the windows in between serving heaps of rice, stew chicken and beans, trying to figure out why crowds had formed in front of their restaurant on a sticky 90-degree day. 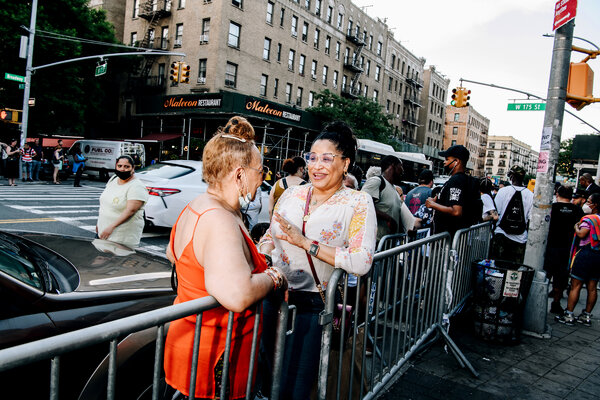 Diners at El Conde Nuevo, another Dominican restaurant across the street, stood on the corner also trying to decipher the rumpus outside. And then, Miranda — wearing a pale blue, long-sleeve chacabana, jeans and the same Nike Air Force 1s, often called Uptowns in the City, that he wore to the Broadway opening of “In the Heights” — arrived with his family, and everyone erupted in cheers.

Jorge Peguero, 71, was on his way home when he stopped and became a proud member of the crowd.

“I’ve lived here my whole life, and this is fantastic,” said Peguero, a resident of Washington Heights since 1969. “It’s a big deal that Tribeca chose to represent the Dominican community, and it’s the first time ever that we see anything like it.”

Miranda, who still lives in Washington Heights, had hoped to premiere the movie where it is set.

“All I ever wanted was this neighborhood to be proud of themselves and the way they are portrayed,” said Miranda, who was within walking distance of his home and his parent’s home. “I still walk around here with my headphones on, and everyone is just like well, Lin-Manuel is writing.”

Many Washington Heights residents have not yet had their encounter with Miranda in the neighborhood. Eglis Suarez, 48, was hoping to change that.

“I want to see Lin,” she said. “We are so proud, this is progress for this community and for the city.”

Exuberant and critically adored, “In the Heights,” directed by Jon M. Chu, is a look at the shifts that happen between first- and second-generation immigrants. The elders hope to make it out of the neighborhood they left home for, while their younger counterparts plan to stay in the neighborhood they call home. It is a story that has occurred a million times over in the area and one that Hudes, who also lives there, encountered daily while filming.

“This isn’t about a hero or a protagonist, it’s about what happens when a community holds hands together and life kind of pushes those hands apart,” said Hudes, who wore large hoops and a flower-print jumpsuit. “It’s about these blocks and these living rooms where you go after school and do your homework or play bingo during a blackout, it’s all here.”

Washington Heights has been home to middle- and working-class Dominicans since the 1960s. In the 1980s, the neighborhood, like many others in the city, was flooded with cocaine and crack, making it unsafe for the community. Those days are past now and some residents say it’s time to move on from a narrative in countless movies and rap songs that no longer fits the neighborhood.

“I’m so proud of this movie,” said Sandra Marin Martinez, 67, a lifelong Washington Heights resident. “Who wouldn’t be? At least there’s no shooting.”

“Everything is dancing, these are my people, I grew up dancing here,” she added as she waited for a glimpse of the cast walking into the theater.

“In the Heights” Premiere

Yudelka Rodriguez, 51, was standing with her daughter waiting for the cast to arrive. She was excited to see her hood in the movie and herself represented.

“I am so emotional,” Rodriguez said as she leaned on a metal gate. “This is the most beautiful thing, to see that your barrio is involved in this; it’s the best feeling.”

That feeling is something Paula Weinstein, an organizer of the Tribeca Festival (which dropped “film” from its name this year), hoped to replicate all over the city with this movie.

“This is what we’ve been dreaming of — New York is back,” Weinstein said. “This is a tribute to the Dominican community, this is what is the best of New York. Every generation of immigrants start one place and move into the community, That's what’s great about New York, that’s what we want to celebrate.”

In the theater, Robert De Niro, a founder of the festival, introduced Miranda, who then introduced the rest of the cast. The energy was electric from the stage to the seats. When a title card that read “Washington Heights” appeared on the screen, the crowd whooped and applauded.

When the movie’s star, Anthony Ramos, arrived, the makeshift set was surrounded by a small crowd. As he stepped out in black-and-white cheetah-print pants, with a matching shirt and jacket, gingerly placed on his shoulders, the crowd at the corner of 175th and Broadway thundered with applause and cheers.

Michael B. Jordan Auditioned For 'Star Wars: The Force Awakens' and It Went Horribly — 'That Was My Worst'