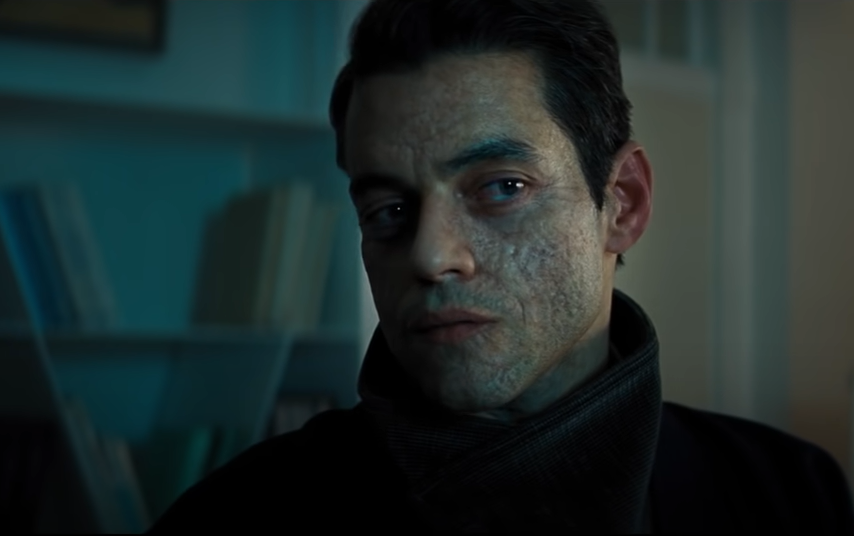 After over a year of delays, yet another James Bond film has been released that features a villain with a facial disfigurement.

Rami Malek plays Safin in No Time To Die, the ‘bad guy’ who appears to have prosthetic burn scars or acne.

Sadly the gut-wrenching feeling I got upon seeing him in the trailer was something I’ve come to expect. I’ve become pretty resigned to seeing this trope in films and TV – new and old.

As a woman with facial scars, it’s devastating to know that young children will once again be indoctrinated by the use of features like mine to invoke fear and disdain.

And this isn’t to say that my family and I haven’t been fans of this beloved 007 institution – I too was a child and still have the image of a blood-filled screen on a Nintendo-64 version of Goldeneye etched in my brain. Back then, I wouldn’t have batted an eye to seeing a baddie with scars either.

But now my eyes have been opened to the after-effects of images like these; when immortalised by one of the longest-standing film franchises there is, these connotations will last for generations.

When I’ve volunteered in schools, I have had young children tell me that my face is scary and that they don’t like it.

The first few times I was stunned into silence. I’ve learnt now to explain that I was in an accident, but that I’m OK now and it doesn’t hurt.

Their inquisitiveness and need to know that I’m not in pain I can deal with. But I’m fearful that if I have my own child one day, they will turn around and say the same thing: that my face is scary.

This eats away at me, my sense of self, and often prevents me from wanting to engage with children that I don’t know. I do my best to smile back at them and show there’s nothing to be scared of. But it hurts like hell.

The curiosity is unsurprising given how many film, TV and even children’s book characters there are with scars and differences. There’s even a seemingly innocuous Hairy Maclary cat character called Scarface Claw.

I try to reference Harry Potter as an example of a good character with a scar, even if it isn’t lifelike, and there are a handful of others like Deadpool. But the bad examples still outweigh the good.

Children’s fear must come from being sold the lie that facial difference is a bad thing; that it can only be a mark of being a bad person, someone not to be trusted.

No one is born thinking this. Instead, through TV, films and books we’re made to think that disfigurement must have been part of a character’s traumatic experience that turned them to the ‘dark side’. Get the reference to yet another cinematic culprit?

Star Wars is sadly another series I now have a love-hate relationship with, thanks to characters like Kylo Ren and Darth Vader. It makes me feel conflicted by the hurt I feel when seeing characters that mimic my own face to cause fear in films that I’ve always loved.

When I was part of the team behind the ‘I Am Not Your Villain’ Campaign in 2018, which saw the BFI pledging to no longer fund films that used facially scarred villains, it was incredible to see recognition of the historical harms caused.

However, the sense from some was that we were attempting to limit opportunities for actors with personal experience of disfigurement. This is absolutely not the case.

The point that perhaps got lost was that right now the representation we see of disfigurement is disproportionately swayed towards ‘bad’ characters. Given that we don’t yet live in a world where people who look different aren’t being subjected to bullying, discrimination and hate crime, these tropes play into the negative attitudes that then arguably permit further ostracisation and abuse.

I want to see not just myself represented, but the entire facial difference community reflected in the films and TV we consume. I want to see the true, multi-faceted, diverse nature of the community of which I am proud to be part of, not the monolith I see in one-dimensional characters where the first indication that a character is evil is the visual cue of some prosthetic scars.

Whatever the specific facial difference of Rami Malek’s character, it’s not real – the actor had to undergo hours of makeup and prosthetics to achieve the look. This means that people with direct experience have been overlooked for that role (a problem of its own worth discussing).

Not only this, it reproduces this old, harmful idea that links scars with being evil.

Millions of viewers of The Graham Norton Show last week have now witnessed interviews with the stars of the latest Bond film. At one point, Norton referred to previous villains and their disfigurements as an ‘unfortunate shaving accident’ or ‘his whole face fell off’ – proof of how the film has given way to a mockery being made of those who actually live with facial scars and differences.

Rami Malek was then asked, ‘What’s wrong with you?’ – to which he seemingly struggled to answer. The film tells the world that it’s OK to look down upon people who look like me, it tells us that we are not worthy of respect, dignity or even a look in when it comes to diversity and equality.

I wouldn’t be surprised if Malek faces a social media storm from hurt and angry viewers, similar to the response Anne Hathaway received after her appalling role in The Witches in 2020, which used hair loss, scars and limb differences as markers for her villain character.

But I do not think it’s helpful to hold only one individual accountable – because how many people must have been involved in the production who either did not feel the need to question the decision, or perhaps they did not feel safe enough to question something that might compromise their job?

This is not endorsing cancel culture. The point to address here is the culture that equates facial difference with immorality without challenge. It’s the culture where we – filmmakers and general society – often don’t see a problem with this stereotype playing out on our screens.

Despite being praised for better inclusion in this Bond film in terms of race, the makers of No Time To Die have completely disregarded another area of equality.

Disfigurement is a neglected human rights and equality issue, and clearly the film industry is perpetuating this by proving that they simply do not care enough about people who look different and the detrimental impact their ‘creative’ choices are having on people’s real lives.

​​I don’t want to be a killjoy. I hope viewers enjoy the film, and appreciate the efforts of the truly talented, teams behind it. I just hope that we can collectively realise the real-life impact of this cliche.

Real change will come when we don’t just see people with scars on screens or in public culture. We need a seat at the creative table, behind the screens, to ensure our real-life experiences are played out respectfully in the public eye rather than simply taken from us as a tool to dehumanise and marginalise.

In Films and on TV, a New Openness to Natural Black Hairstyles

Film of the week: Hanks makes it a Beautiful Day at the cinema