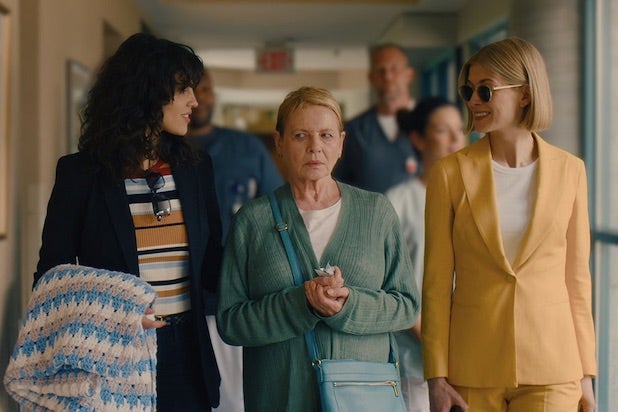 “I Care a Lot” is a test that throws a lot of different but related questions at its viewers:

Will you hate the central character, Marla Grayson, even though she’s played by Rosamund Pike, who showed in “Gone Girl” that she’s very, very good at playing very, very bad?

Is it OK to root for her if the people coming after her are very, very bad, too?

Will you take any pleasure in watching her be despicable, since Pike obviously takes so much pleasure in playing her?

Can you continue to hate her when she starts doing the stuff a movie hero typically does, like using all her pluck and resourcefulness to come back from rock bottom and get revenge on the people who tried to harm her?

And if you do ever stop hating her, will you then feel guilty and hate yourself for being a sucker, or hate the movie for turning you into a sucker?

I can only speak for myself when I say that I hated Marla at the beginning of the movie, I hated her at the end of the movie, I hated her every moment in between and I sometimes even hated the movie for trying to prod me in the direction of not hating her. But director J Blakeson (“The Disappearance of Alice Creed’) probably wanted me to feel that way, because why else would he have made this nasty little piece of provocation based around scenery-chewing badness from Pike, Eiza González, Peter Dinklage and a scene-stealing Dianne Wiest?

“I Care a Lot” may have delusions about being a cautionary tale of elder abuse and the perils of court-appointed guardianship, but let’s be honest: It takes way too much delight in despicable people doing despicable things to really care a lot, or even much at all, about the larger social issues.

What it cares about is Marla, in her expensive suits and patently phony smile, conspiring with crooked doctors to become the court-appointed legal guardian of elderly people whose bank accounts she can then bleed dry in the guise of serving their best interests. She’s aided by her assistant (and lover) Fran, played by González, and by a system that’ll happily hand over guardianship to a cunning leech like Marla.

Any sane viewer will despise Marla within the first 10 minutes, as she and Fran set their sights on Jennifer Peterson (Wiest). She’s an ideal victim because she’s got lots of money, a nice house, no living relatives to cause problems and a doctor who’ll claim Jennifer is suffering from dementia in exchange for some stock in the care centers to which she funnels patients.

But Jennifer isn’t quite as strings-free as Marla and Fran think, which they learn when a slick lawyer played by Chris Messina pays them a visit offering both bribes and threats. When Marla confronts Jennifer and demands, “Tell me who you are,” Jennifer smiles sweetly and says, “I’m the worst mistake you’ll ever make,” before slipping into a delicious little giggle.

Jennifer, it seems, has connections with a hot-tempered crime lord played by Peter Dinklage. But Marla is way too confident and too sociopathic to let a gangster intimidate her, so things get ugly and bloody and stay there for much of the film’s two-hour running time (which, by the way, is too long).

Dinklage is at least fun to watch, even when some of his scenes are curiously flat. Pike is mostly calm and determined, reviving her “Gone Girl” character but throwing in a touch of Scarlett O’Hara. (She never says, “As God is my witness, I’ll never be hungry again … even if that means defrauding every senior citizen I can lay my well-manicured hands on!” but she might as well have.)

But Marla also turns into a cartoon character of sorts, bouncing through complications and beatings and twists and subplots and dental surgery with a controlled fury that is occasionally entertaining but thankfully never endearing. Blakeson has created a black comedy where the only thing to like is the fact that you don’t like anybody – except maybe Wiest, despite her own nefarious dealings.

“I Care a Lot” is amusing, if you have a liberal definition of that word; it’s vicious, but with the tiniest touch of humanity surfacing every now and then before it get slapped right down again. It also sets out to provoke you, and to ask one final question: Can you enjoy this movie and not feel bad about yourself afterwards?

Joseph Elic, who carried Jack Nicholson in ‘One Flew Over the Cuckoo’s Nest,’ dies at 98