Kirsten Storms’ appearance has been a hot topic among General Hospital viewers. They have been commenting on it for years and because of that, the actress generally doesn’t respond to the negative remarks.

Recently, it appeared that Kirsten Storms had put on some weight. That immediately sparked pregnancy rumors. Her General Hospital wardrobe became more Bohemian in nature, leaving her wearing things that were flowier.

Yesterday, Kirsten Storms shared a photo of herself on Instagram while shopping at Target. A fan commented about her weight under the picture and that prompted a response from the General Hospital actress.

@target shopping for Harps. My kid looooves shoes (she gets that from her Daddy), but she goes thru them like it’s her job. The boots I bought her for Christmas already have holes in them and she is still rockin’ em. Oh to be 5 yrs old… Rainy day outfit: Black Levi skinny jeans, Black Frye “Billy” Cowboy Boots, Led Zeppelin Tee, Black Jean Jacket & a messy top knot. Purse is my Grandma’s Gucci bag from the 70’s that I just had reconstructed (thanks to @barinileather for making it look new again! 🙌🏼). 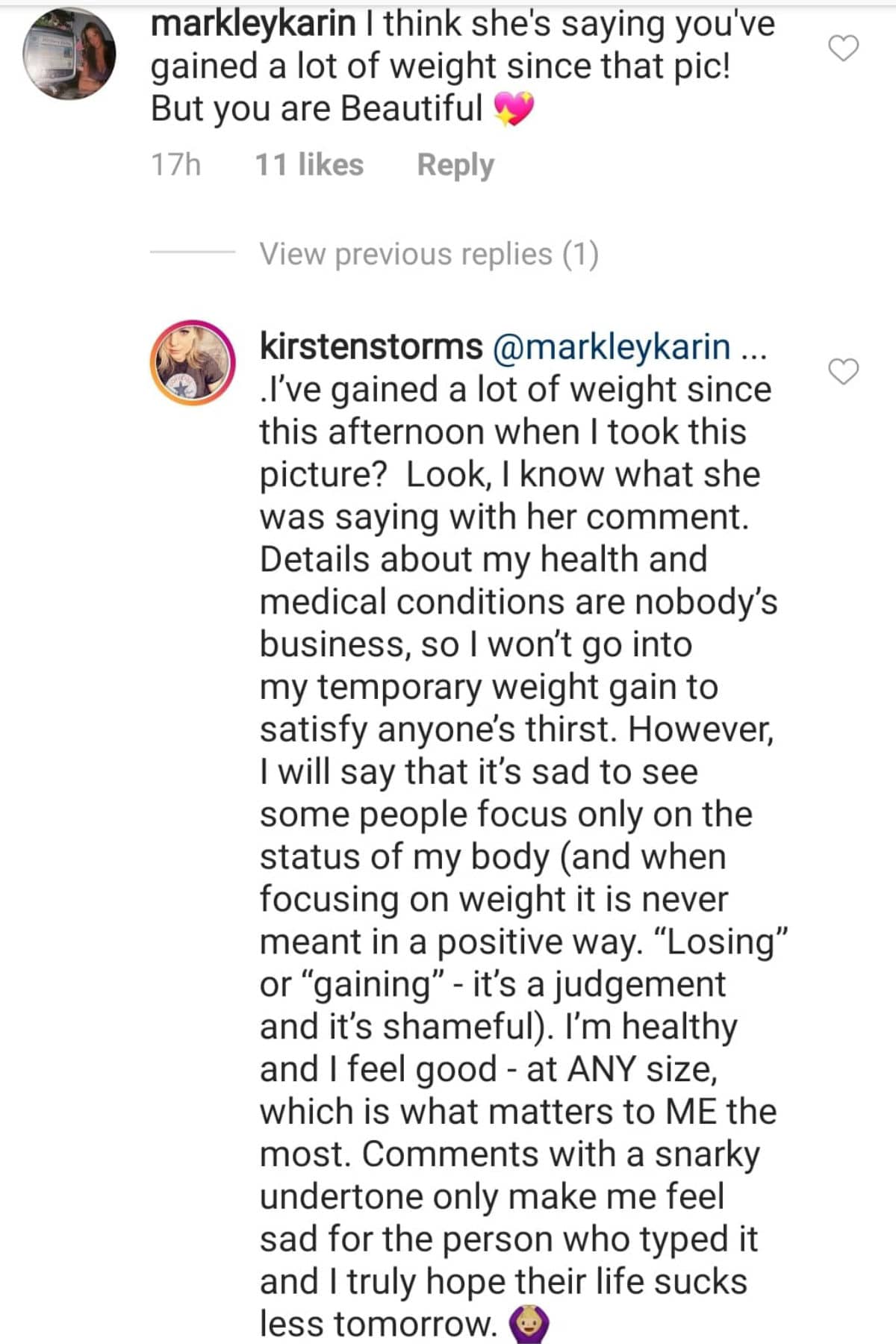 For quite a few years now, Kirsten Storms has been battling health issues. She was temporarily replaced on General Hospital with Jen Lilley and Molly Burnett on separate occasions. Her first public battle was with endometriosis was back in 2011. After that, she was missing from Port Charles due to maternity leave when she welcomed her daughter, Harper Rose.

Back in 2016, Kirsten Storms was dealing with skin issues. This also sparked talk about how thin the actress was looking. Of course, General Hospital viewers criticized her then too, which prompted her to speak out about what was going on.

The General Hospital actress has also opened up about battling severe depression. In fact, she paid tribute to her ex-husband, Brandon Barash for helping her through a difficult time. Kirsten Storms has been on General Hospital for over a decade and much of her life has been lived in front of the camera.

Last May, Kirsten Storms confirmed she had resigned her contract with General Hospital and will continue playing Maxie Jones in Port Charles. With all of the other things she is dealing with, the online comments aren’t necessary.

Do you have something interesting to say about this? Start or join a discussion on our forum!

The end of erotica? How Hollywood fell out of love with sex