Home » Movies » ‘From this day forward, I will always be “Oscar-nominated actor Ke Huy Quan”!’

After mounting a major career comeback and losing his health insurance, the “Everything Everywhere All at Once” actor said the news was surreal. 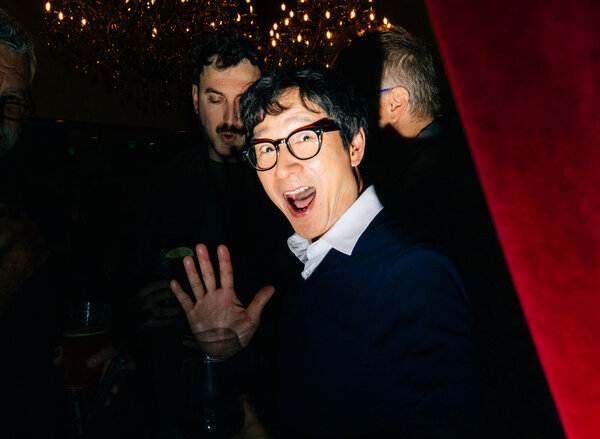 On Tuesday morning, Ke Huy Quan, Michelle Yeoh and their “Everything Everywhere All at Once” co-directors Daniel Kwan and Daniel Scheinert met on a video call to watch the announcement of the Oscar nominations together, and as the sci-fi hit racked up each of its stunning 11 nominations, the group would toast, gasp, cheer and yell.

“It was so loud, we could barely hear what anyone was saying,” said a laughing Quan, who received his first Oscar nomination Tuesday for playing Waymond Wang, the sweet-natured husband to Yeoh’s multiverse-saving laundromat owner. How did he react when his name was read?

“I was jumping up and down, screaming at the top of my voice, exactly the same way that I did when I got the phone call from my agent that the Daniels wanted me to play Waymond,” Quan said during a phone interview conducted a half hour after the announcement. He described Tuesday as one of the happiest days of his life. “It’s so surreal. I am ecstatic.”

“Everything Everywhere” represents a major career comeback for Quan, who rose to fame as a child actor in films like “The Goonies” and “Indiana Jones and the Temple of Doom,” but quit acting for decades when he found roles for an Asian actor hard to come by. While watching “Crazy Rich Asians” in 2018, Quan began to mull a return, and two weeks after asking an agent friend to represent him, he was sent “Everything Everywhere” and went out on his first audition in years.

Now, he’s Oscar-nominated for it, and alongside Yeoh, his co-star Stephanie Hsu, and “The Whale” actress Hong Chau, history has been made: There have never been so many actors of Asian descent nominated in the same year.

Interviews With the Oscar Nominees

“I’ve been watching the Oscars for more than 30 years now, and every single year, I would imagine myself being on the red carpet, being in that room with everybody,” Quan said. “Of course, as the years went by, the chance of it ever becoming true slowly dissipated. And when I stepped away from acting for so long, I didn’t think that dream would ever come back. So to be here today, to hear the announcement, it is so unbelievably surreal. It’s crazy, and I’m speechless.”

Like the “CODA” star Troy Kotsur last year, Quan has cruised through the season picking up every supporting-actor trophy in sight, from the Gothams to the Golden Globes to the Critics Choice Awards. It’s an outcome he never could have foreseen when he wrapped the film in early 2020 and then, over the pandemic, failed to book even a single follow-up role.

“That year and a half was horrible because every tape we would send in, we would get no response back,” he said. “I was so afraid I was going to lose my health insurance. I called my agent, saying, ‘Get me anything, it doesn’t matter what, I need to make the minimum to get health insurance.’”

But Quan’s taped auditions still came to naught, and he lost his insurance just a few months before “Everything Everywhere” came out in March 2021. “I was so dispirited,” he said, remembering a desperate call he placed to “Everything Everywhere” producer Jonathan Wang: “I said, ‘You’ve seen the movie. Can you please tell me, am I any good in it?’ He said, ‘Ke, why are you asking such a stupid question?’ And I said, ‘Because nobody wants to hire me.’ And Jonathan says, ‘Well, you just wait. Just wait until the movie comes out.’”

Since then, Quan said, it’s been a sea change in how he’s been perceived. People who used to stop him on the street and ask, “Are you the kid from ‘Indiana Jones’?” now recognize him as Waymond from “Everything Everywhere,” and he will soon be seen in Season 2 of “Loki” and the forthcoming series “American Born Chinese.”

“It’s been the greatest, wildest ride,” said Quan, who was eager to celebrate the day’s success with his wife, Echo — “We didn’t think a day like this would ever, ever happen” — and to call family members who had stuck by him and sent proud texts all through awards season.

“For so many years, they were so worried about me,” he said. “To see how happy they are means the world to me, so I just want to spend the day with my family.”

As I brought our call to a close, something new dawned on Quan, and he began to talk … well, all at once.

“Kyle! From this day forward, I will always be ‘Oscar-nominated actor Ke Huy Quan’!” he said. “How great is that? Oh my gosh, I see it all the time when I go watch trailers, when people talk about actors — ‘Oscar-nominated actor Leonardo DiCaprio.’ It sounds so nice. And now, my name is going to sound like that, too.”