Home » Movies » From Instagram to 5,000 Theaters: Diana Silvers on ‘Ma’ and ‘Booksmart’

Diana Silvers has been seen in just three movies in her short career, but she has quickly ascended from a bit part in the superhero thriller “Glass” earlier this year to major roles putting her on thousands of screens this weekend: she plays a high school love interest in the female-centric comedy “Booksmart,” and the main teenager menaced by Octavia Spencer’s psycho in the horror tale “Ma.”

The name Diana Silvers may suggest a golden age of Hollywood starlet, but she is as au courant as they come. Discovered as a model on Instagram, she’s beginning her film career in the #MeToo era. “I feel lucky to be entering the industry at this time because people are being held accountable,” the 21-year-old said over orange juice at a downtown Manhattan hotel recently. “I just feel safe. I’m not anxious about anything, except maybe saying something stupid in an interview. And so far, I’ve been extremely lucky.”

She also talked about female mentors, her love for Taylor Swift and fighting John Malkovich. Here are edited excerpts from the conversation.

You grew up in Los Angeles, but you don’t come from a showbiz family. Your father is a psychiatrist, and your mother was an architect. How did you discover acting?

I’m the fifth of six kids, and we’re quite an eclectic family. People call us the Royal Tenenbaums, because we’re that kind of wonky. My dad took me to a birthday party at the Santa Monica Playhouse when I was 7, and I thought it was cool, so I tried it out. My first play was called “My 13th Birthday.” I remember my lines: “Happy 13th birthday!” and “I want sushi.” I’m still waiting for my Tony.

You’ve said you really knew you wanted to act after you saw Juliette Lewis’s performance in “What’s Eating Gilbert Grape.” She plays your mother in “Ma.” How long did you wait before you told her she was your inspiration?

Day 2! [Laughs] It was a little bit creepy, but she was stuck with me on set anyway, so I figured I might as well tell her. She gave me a hug, and I was totally crying. To me, it was a sign from the universe that I’m doing exactly what I should be doing. 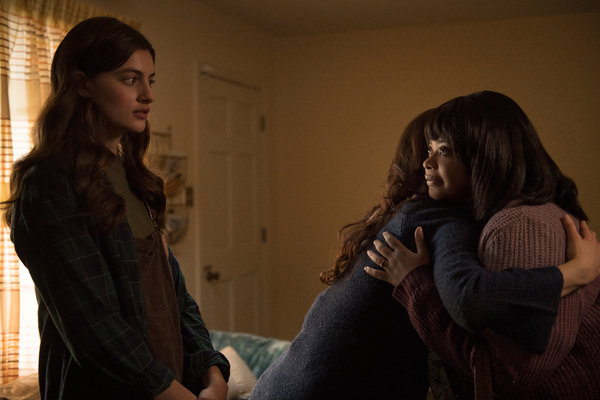 In addition to Lewis, you’ve gotten to work with other powerful female role models, like the “Booksmart” director Olivia Wilde and “Ma” executive producer-star Octavia Spencer.

How lucky am I to have these experienced, seasoned, patient people guiding me through the steps. I never feel alone. I always feel like I belong. I just want to do roles that are going to change one person’s life.

Judging by the online reaction to your “Booksmart” character, you’ve succeeded.

The coolest thing was someone DM’d me on Instagram and said, “I came out to my parents after, and I don’t think I would’ve been able to do it if I hadn’t seen this movie.” I don’t want to cry right now because I just did my makeup [laughs], but that’s amazing.

I can’t even. She means more to me than she will probably ever know. Taylor Swift has seen my face. Cool! Sick!

Your Twitter bio says you’re a huge fan of “The Office,” and Mindy Kaling has tweeted repeatedly about her love for “Booksmart.”

It’s just really wild and weird that people you think so highly of are watching a movie you’re in and maybe think you’re cool.

It seems like we’re in a pop-culture moment where there’s a lot of encouragement, especially among female actors and filmmakers.

It’s like in any community, it’s only successful when you cooperate and build each other up. In Hollywood right now, there’s a shift in the paradigm. People are realizing if we support each other, good things happen.

You present a pretty realistic picture of yourself in your Instagram posts.

That’s not what I mean, but your photos are refreshingly unfiltered.

I never edited a photo of myself in my life. I don’t have the energy. Once you look at yourself that way, you think, “What do I need to edit in real life?” Nothing — we’re all beautiful and perfect because of who we are.

Is it true “Ma” director Tate Taylor created a part for you in his next film, “Eve”?

He turned a male role into a role for me.

Can you say anything about the movie? I know Jessica Chastain plays an assassin.

All I can say is Colin Farrell plays my dad. We both have crazy eyebrows. And I did my first-ever combat scene with John Malkovich. That should be on my tombstone.

Between “Ma” and “Booksmart,” you’ll be on more than 5,000 screens nationwide. How does that feel?

I don’t even know. I’ve got an audition on Friday, and that’s all I’m thinking about. People are going to be watching “Ma” and “Booksmart” while I’m in a callback, which is crazy, but still it’s just another day for me fighting for the next role.