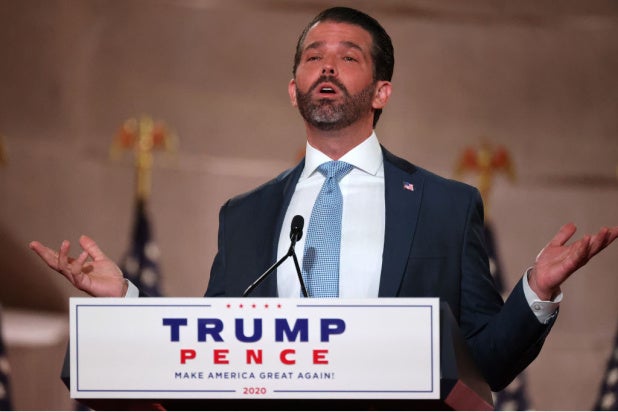 On Friday the White House confirmed that Donald Trump Jr., son of President Donald Trump, has tested positive for coronavirus. He’s one of several prominent Republicans — including Florida Senator Rick Scott, and Andrew Giuliani, son of Rudy, who confirmed they have been exposed to COVID-19 just today alone.

And of course he’s one of dozens of people in Trump’s immediate orbit who have contracted the virus in the last several months, including Hermain Cain, who died from it in July. This comes after months of efforts by the president and his associates to downplay the illness and turn efforts to prevent people dying of it into a political wedge issue. His dad, Donald Trump, of course also caught the virus in September.

In what is probably not a shock, once the news was public, people on social media definitely chose not to remain politely silent about their feelings regarding Don Jr. Instead, they came with lots and lots of jokes at his expense.

“I guess his father finally hugged him,” Jimmy Kimmel joked.

“He’s trying so hard to be like his dad,” Podcaster @ArmyStrang said.

'The Devil Wears Prada': How Anna Wintour Showed Her 'Great Sense of Humor' About the Movie