Home » Movies » Eddie Huang: Filmmaker Was on His List of Things to Do Even Before Chef

There was a time before Eddie Huang became Eddie Huang, the outspoken restaurateur, travel show host and author who once seemed ready to burn down “Fresh Off the Boat,” the network sitcom inspired by his own childhood. In that earlier moment, the aftermath of the recession, he was simply hustling in New York, begrudgingly working at a law firm while selling weed and streetwear on the side. The day he was laid off, he had a moment of clarity and wrote out a list of six things he wanted to do with his life.

The final entry on the list — own a restaurant — was what eventually made his name. But two spots up — write screenplays — revealed his true desire to become a filmmaker. “This is all that I’ve ever wanted to do,” Huang recently said days before the premiere of “Boogie,” the new drama he wrote and directed.

As with much of Huang’s career, the debut, which follows a Chinese-American high school basketball star (Taylor Takahashi, a first-time actor and Huang’s former assistant), often reads as a sharp-toothed consideration of what it means to grow up Asian in America. In his telling, the experience can be dubious, although Huang may have lately softened on his views.

The 39-year-old recently returned from Taiwan, where he was living throughout most of the pandemic, a time when he re-evaluated his life back home. After the thrill of the first six months abroad, he eventually found himself depressed, facing the pressures of conformity in a culture that, heightened and distorted by his celebrity image, could feel suffocating. Coming back, he appreciates the complexity of America’s diversity anew: “It’s the best experiment running,” he said.

By video chat from his home in Los Angeles, Huang spoke about his new film, being accepted and rejected by his community, and his parents. These are edited excerpts from the conversation. 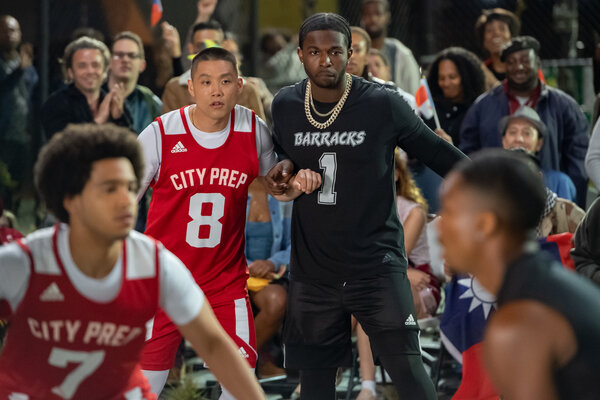 You’ve done many things in your career — how and why did you come to filmmaking?

I always wanted to be a director, but I had professors that told me, no one’s going to make a film with an Asian lead, an Asian story. I was told that by my former agency even after “Fresh Off the Boat” came out. The reason I sold sandwiches (at his restaurant Baohaus), the reason I went to books and hosted shows is because the door to film was not open to me. I had to basically create a cult of personality and create leverage within Hollywood so that people believed in me to make this film.

Your first major foray into the industry was through “Fresh Off the Boat.” Do you now look differently on how you handled that experience?

I really do think about it a lot. But I was right about “Fresh Off the Boat.” I was right not to settle, and I was right to argue. Because they really were telling white narratives through yellow faces. That show didn’t challenge anybody. It was historic because it broke a wall and we got representation, but representation is nothing. It’s almost just like acknowledging that we’re in this country.

“Boogie” ostensibly centers on basketball, but what is the movie about to you?

This film is really about this conundrum: We immigrate from East Asia to America, and the way we run our families, the way we run our societies is almost completely opposite to America. So as a kid coming of age in America, you have to ask yourself some very difficult questions. I know my parents do things this way, my culture does things this way, but what choices would I make?

The protagonist, Boogie, lives in a violent household, but you’re careful about not demonizing his parents. Is that a reflection of your own life?

I grew up in a house with a lot of violence, and you see quite a bit of domestic violence in this film. It’s actually been toned down for American audiences. It was 10 times worse in my house. But I wanted to use that as the primary thing we were unpacking and examining — the presence of violence in an Asian home. I remember growing up feeling it was [messed] up, but the older I’ve gotten, I started to realize, in an Asian family, love is assumed. In the very end, you forgive all of these things and you put up with it because we love each other and we sacrifice so much.

Our culture and our families sacrificed so much for us, and they would rather we hate them and be great people than love us and not live up to our potential. That is the defining feature of our parents. But I would change the narrative one bit — if there’s one thing America taught me, it [should be]: I don’t care if I’m the bad guy, I just want you to be happy. They’ve equated success and social standing with happiness, and they’re completely disconnected things.

In your mind, were you writing the film for your own community?

When I write this, I do feel the power of 5,000 years of culture running through me. [Laughs] I really do feel, like, “by us, for us.” But I have that mentality because my entire life, older Chinese-Taiwanese people, they understood me. Younger ones were always like, he’s more into Black culture, he’s not Boba Asian. I really relate to old values and I’m not the most accepted by my own community. I think that my community [is interested in] me because of my success, not because of who I am. I definitely don’t think they like how I wade into other cultures.

Why do you think you’re not entirely accepted by your own community?

I think every community makes race for immigrants so binary. If you adopt some American traits, and you open yourself up to different cultures, you’re not Chinese, you’re not Persian, you’re not Black. It’s very prefixed. No substitutions. “Boogie” is a film about a kid who’s clearly raised in a very Chinese-Taiwanese home with insane values, but he’s decided to choose basketball as his craft. His girlfriend is Black, his best friend is Dominican, he plays in downtown New York — he made choices. He’s like, I’m going to order à la carte and fill my Lazy Susan with the things I want.

That questioning about identity comes up a lot in the film. The director Justin Chon recently took part in a round table I held and talked about seeing a lot of projects in development that overly emphasize the idea of being Asian. Do you worry your questioning in this film might read as exoticization in that way?

I know and understand Justin’s frustration. I hang with Justin, but I learned a few years ago, just do you. I love Justin because he’s genuinely curious, and we always have been when there wasn’t money in this.

I won’t name names, but there’s a person in your [round table], where the first time I met that guy was the year “Fresh Off the Boat” got picked up, and he said to me, “I had no idea you could make money telling Asian stories — that’s crazy, thanks man! I’m going to get into it, too.” It was just so flippant, and I was like, I don’t think he even realizes how insulting that is, not just to me, not to our culture, but to himself. That he never thought his stories were good enough.

This was the late rapper Pop Smoke’s acting debut, and you cast him at a time when he was on the rise. Did he have a sense of his impending superstardom?

[His hit] “Dior” came out around the time we started shooting with him. It was really bananas to watch him just become the king of New York during production. I was telling him, you need to buy a house, move to New Jersey, do some rich people [stuff]. In between scenes, he was just in his trailer making up dances, like the “Woo” dance. He’s just a kid and it was all happening around him, and he was adjusting to it. And he had no fear of it — he had no fear of anything. He was never overwhelmed. It was, like, humorous to him.

You cast your own mom in a small role as a fortune teller. What did your parents think of the movie?

I played them the director’s cut in my house. They were sitting on the couch, and after the movie was over, it was very somber. It was quiet for a solid 20 to 30 seconds. And then I just saw my mom nod. My mom felt really good. My dad’s like, “I understand. You did really good. I’m just very proud of you because I also feel like you understand me.” It was so emotional for the three of us. We didn’t hug. When they see that final scene, they’re like, Eddie knew we loved him. And I think that mattered the most to them.

'Japan Sinks 2020' is a Bleak, Violent Disaster Anime That Hits Harder During Lockdown

6 Romantic Movies to Rent From Redbox