Home » Movies » Bruce Dern Sympathizes With Rick Dalton in 'Once Upon a Time…in Hollywood': 'I've Been There'

Leonardo DiCaprio’s character, Rick Dalton, is a Hollywood actor struggling to save his career. Dern, for all his success, knows how that feels 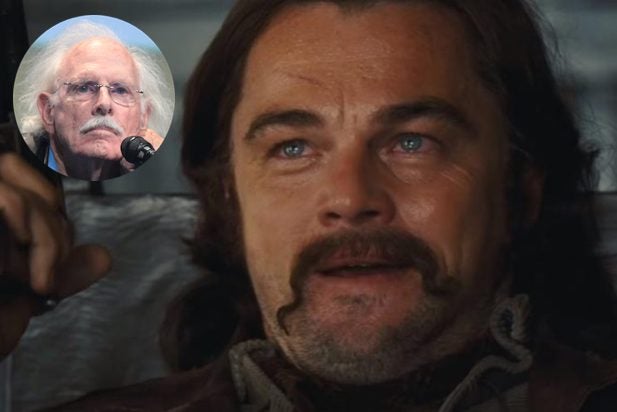 Minor spoilers for “Once Upon a Time… in Hollywood” below.

There’s a moment midway through “Once Upon a Time…in Hollywood” where Rick Dalton, played by Leonardo DiCaprio, finally loses it. While describing the plot of a book he’s reading to his young co-star, he breaks into tears as he realizes that the book’s story of a past-his-prime gunslinger hews too close to his own life. All the missed opportunities, bad decisions, and regrets that have plagued him since the film’s start finally overwhelm him.

“That moment where he freezes and chokes up…I’ve been there,” Dern told TheWrap. “I was there much earlier in my career because I had such a hard time getting out of TV and into movies, and I was by no means a TV star.”

Dern, a recent Quentin Tarantino regular who previously appeared in a bit role in “Django Unchained” and as one of the title characters in “The Hateful Eight,” appears the director’s latest as George Spahn, the man whose movie ranch becomes the hideout for the Manson family. He’s also a two-time Oscar nominee with a career now considered legendary. But unlike his “Once Upon a Time” co-stars, most of whom weren’t even born with the film takes place, the 83-year old Dern lived in the Hollywood that Tarantino recreates; he even played a villain of the week on an episode of “Lancer,” the western TV series DiCaprio’s Dalton guests on in the film.

And like Dalton, Dern struggled to navigate the leap from acting in TV shows to movies.

In an era of entertainment where the boundary between TV and movies has been nearly erased, it’s easy to forget that before the rise of cable, there were very few actors that crossed over between the two mediums. In “Once Upon a Time…in Hollywood,” Rick takes a huge gamble by leaving the TV show that made him famous to try his luck in movies. But instead of getting “The Great Escape” as his big World War II film, he gets a lead role in a violent cult film where he torches Nazis with a flamethrower before going back to guest roles in TV.

“Quentin and I talked about this: Since 1954, there are only 32 people who starred in their own TV series who went on to be movie stars. Steve McQueen, who did ‘Wanted Dead Or Alive,’ was one of those very few,” Dern said, recalling how in 1975, David Picker, the head of United Artists, advised him to turn down a lucrative lead TV role because it would shut the door on his opportunities for big film roles.

“He told me, ‘As a buyer, I never buy anything I get for free in my living room.’ That was the way the industry worked until Jane Fonda did ‘Hedda Gabler’ for a network TV movie after we did ‘Coming Home’ together.”

That Tarantino understood how Hollywood worked at that time is one of the reasons why Dern holds the filmmaker in extremely high regard. He puts Tarantino alongside Alexander Payne and Francis Ford Coppola on the list of “the most brilliant men I’ve ever worked with.”

“I don’t have many complaints about the film industry today, but I wish that there was more respect for what came before. Quentin absolutely has that. I came to his house to look at the script for ‘Once Upon a Time…in Hollywood’ after Burt Reynolds died, and I was out on his patio reading the scene with George Spahn when Quentin came out and said, ‘Come in here and look at this.’”

“I came inside, and he showed me five episodes of me in ‘Lancer’ and ‘Big Valley,’ along with all these other series I was the guest star on. So he knew all about the history and making of these shows that you see in the picture.”

His gratitude for Dalton’s portrayal as an actor extended to DiCaprio as well. He says that back when DiCaprio was receiving awards for his work on “The Wolf of Wall Street” — the same year Dern was on the awards circuit for “Nebraska” — the two men met and DiCaprio said that he was a student of Dern’s work. If you look closely at Dalton’s performance as “Lancer” scoundrel Caleb DeCoteau, you might see some shades of Dern’s turn in 1972’s “The Cowboys,” in which he earned the distinction of portraying the only villain who killed a John Wayne character.

But as sympathetic as Dalton can be, Dern also appreciates that Tarantino and DiCaprio never idolize the man, keeping it to warts-and-all portrayal. Perhaps the highest praise he could give the two men for their work on Tarantino’s latest protagonist is that Dalton reminded him of his all-time favorite line in any film, one he’s quoted often in interviews, from the HBO movie “RKO 281,” a biopic about the making of “Citizen Kane.”

Maybe, after the events of “Once Upon a Time…in Hollywood,” Dalton will clean his life and his attitude up and become the star he’s always wanted to be. After all, the 70s, with their groundbreaking changes to Hollywood, might offer him a new opportunity. And as Bruce Dern himself has shown, you’re never too old to have a breakthrough role.

“I’ve had people ask me if I’m ever going to retire and I’m like ‘Are you kidding me?’” he laughs. “There are two things I love doing: acting and running. I estimate that in my life I’ve run about 105,000 miles. That’s four times around the world. I’m lucky to have gotten the roles I’ve played. Some great actors never get them. So going forward, my goal is to find roles that no one my age has done before.”

Superhero Bits: 'The Powerpuff Girls' is Getting Re-Piloted, 'Loki' Was Influenced by 'Teletubbies' & More