Home » Movies » All the Major Deaths in 'The Suicide Squad' Ranked

Some definitely hit harder than others 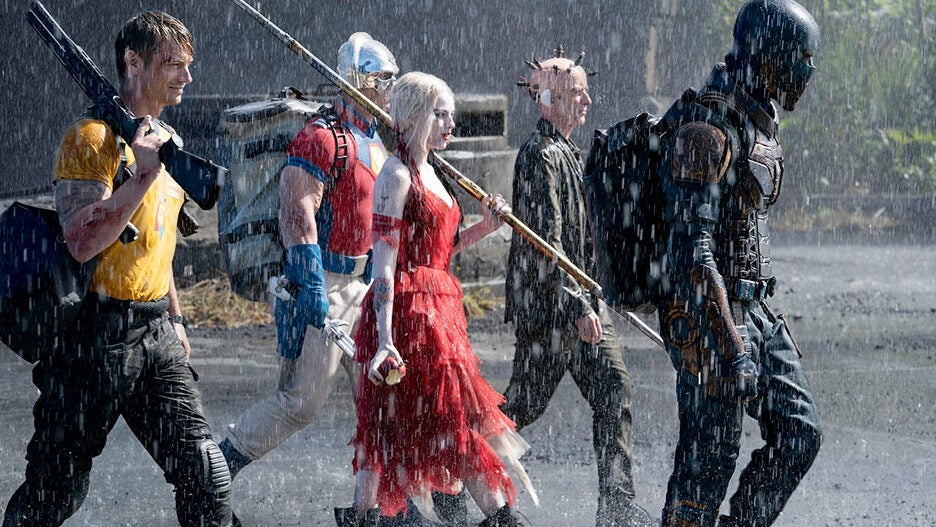 Warning: MAJOR spoilers ahead for “The Suicide Squad.” You have been explicitly warned

“The Suicide Squad” has finally arrived in theaters and on HBO Max and, as director James Gunn promised, there is a whole lot of death. In fact, there are so many deaths that it’s hard to keep an accurate headcount of those who don’t make it through the film. But there are definitely some deaths that pack a little more punch than others.

Unfortunately for those in the opening minutes of the film, it becomes apparent right away that dubbing them the “Suicide Squad” wasn’t necessarily an over-exaggeration — their mission is ridiculously dangerous. It’s dangerous to the point that Amanda Waller’s (Viola Davis) subordinates are openly taking bets on who will die, how it’ll happen, and when they’ll go.

But, rather than starting a dead pool ourselves, we decided to keep a running list of the fatalities, and rank which ones hit the hardest. Obviously this list is subjective, but we’ll show our work for each one. An important note: We are only sticking to deaths that actually, well, stuck, for this list. If “The Suicide Squad” taught us anything, it’s that just because someone seems dead, doesn’t necessarily mean they are dead.

Pete Davidson’s Blackguard was the very first to bite the dust in “The Suicide Squad” — although more accurately, he bit the bullet — meeting his end before the 10-minute mark even hits.

Upon arriving on the beach with the rest of his team, Blackguard immediately steps out of hiding with his hands up, revealing that he sold out his teammates. And then he promptly gets his face blown off by some unseen gunman. It’s visceral, and it immediately sets the tone for what James Gunn wants to do with this film.

This is by no means the least memorable death, but it is the one that packs the least amount of emotional punch. Beyond a few funny moments with Weasel on the plane, Blackguard really didn’t make much of an impression.

Mongal’s death might have actually been the least memorable one, which is disappointing, because she actually goes out in a pretty badass way. While fighting her way through the beach, Mongal launches herself onto one of the landing gears on the enemy helicopter.

She successfully brings it down to the ground using brute strength, but she doesn’t manage to get herself out of the fiery crash. It is solely the coolness of her last act, plus the fact that she didn’t sell out the other squad members, that places her above Blackguard.

Oh Nathan Fillion. You could’ve done wonders in the DC Universe. Sadly, T.D.K, otherwise known as The Detachable Kid, was also among the very first batch of deaths. He was at least semi-useful before he died, detaching his arms to stealthily fight from a distance. But dying in the middle of a firefight, a limbless torso, is just a rough beat. Had we had just a little more time with T.D.K., it might’ve connected more, emotionally, but nonetheless, he deserved better.

If Blackguard was the most visceral death, then Savant was a close second. Like in David Ayer’s “Suicide Squad,” an example needed to be made of someone, to let them know just how serious — and absolutely terrifying — Amanda Waller can be.

So, when Savant looked around and realized just how much a Suicide Squad was not an extracurricular activity he wanted to be part of, he did what any rational person might do: He ran. And as he ran, he was warned that desertion would result in death. And indeed, Waller remotely blew his head clean off.

It’s brutal, made only harder to watch by the fact that Savant is played by the chaotic treasure that is Michael Rooker. If he hadn’t killed that bird in his jail cell, he might rank a little higher on this list. But yet again, we needed more time to really care at all about Savant.

Listen, you can’t bring a javelin to a gunfight. You just can’t. So, seeing Flula Borg’s take on Javelin die early on in “The Suicide Squad” wasn’t all that surprising. You may be surprised that his death ranked above Savant or Blackguard though.

Well, here’s the thing: Javelin had a pretty lasting impact on this movie. By passing his weapon off to Harley Quinn (Margot Robbie), he unknowingly gave her the perfect weapon to defeat Starro the Conqueror with. It also helped her escape her captors. In the long run, Javelin was actually very useful to the team.

His death also provided a perfect moment for some classic Harley comedy, in which she slaps his dead face in an attempt to get him to finish his final sentence. If we’re using death for levity, this was a textbook case in how to do it.

Captain Boomerang was the only other returning member of the Suicide Squad from David Ayer’s take on the crew, so seeing him go was particularly rough. He and Harley had a special bond — close enough that he even got a quick shoutout in “Birds of Prey” — and he was pretty funny just on his own.

His death was a double whammy; first he was impaled by shards of a tree shredded by the helicopter Mongal destroyed, and then he was truly destroyed in the fire of that wreckage. Weasel’s apparent death was the cruelest, but Boomerang’s was a close second. RIP Captain. You’re one of the few who will be genuinely missed

There’s just something about seeing a man destroyed by his own creation that always pulls at just the right emotions. In the case of this film, it was seeing Starro painfully destroy Peter Capaldi’s The Thinker immediately after being freed from containment.

The Thinker was a great villain for the brief time we had him, but his death was one of the first in the film that actually came with some emotional resonance. Starro’s motivations were totally clear, and completely understandable. He had been taken from his natural environment from strangers, brought to an unfamiliar, hostile, new environment, and experimented on. What were they expecting, an extraterrestrial lapdog?

With that massive eye, he knew exactly who his main captor was. It’s kind of hard to miss that mad scientists with metal literally popping out of his head, who’s openly bragging about being in control of Starro. And, like the giant freaking starfish that he is, Starro wasn’t subtle in his methods. The Thinker’s death was just the right balance of blood and storytelling.

No one could blame you for being surprised to see Presidente General Silvio Luna on here, considering he wasn’t a member of the Suicide Squad, nor was he ever truly the big bad of the film (at least, not one that felt real). But his death was memorable, and deserves its moment of recognition.

Really, Luna’s death is a huge moment for Harley. After agreeing to marry him and subsequently having sex with him, she shoots him point blank after learning that he plans to use Starro to kill not only his critics, but his critics’ children as well. Since this is post-“Birds of Prey” Harley Quinn, she’s got a bit of a soft spot for kids now (though where exactly Cassandra Cain is during “The Suicide Squad” is anyone’s guess. It’s probably a good thing she wasn’t here for this one).

As Harley explains to Luna as he bleeds out on the floor in front of her, she promised that after her last boyfriend –you know the one — she’d be on the lookout for red flags in men she was interested in, and if she spotted any, she’d kill them. And, well, killing kids is a big red flag.

A fantabulously emancipated Harley Quinn may be rough for Luna, but she sure is fun to watch.

David Dastmalchian’s Polka Dot Man was the most unexpectedly charming of the group, and he made it further in the film than many fans likely expected, given the randomness of him being there to begin with.

It was Starro that inevitably took him out, literally crushing Polka Dot Man after he used his dots to actually inflict some damage on the monstrous alien. Those dots, which caused him so much pain every day, were a side effect of a virus his own mother injected him with, in the hopes of making him and his siblings superheroes. So, whenever Polka Dot Man went into battle, he imagined his mother instead of his actual adversary.

And in his final moments, he got his wish; he used his dots to take out what he saw as a giant version of his mother. “I’m a superhero!” he yelled happily, just moments before his death. It was an unexpectedly poignant moment, and devastating but beautiful way to wrap up his story.

Plus, he was the only one that truly cared about Milton. Polka Dot Man was a real one.

Whenever you find yourself mourning the villain’s death, you the villain was done right. Starro the Conqueror was absolutely terrifying, and yet his death was downright heartbreaking.

Though it looked like it was going to be Harley that brought down the giant alien, it was actually the same swarm of colorful sea creatures that nearly took out King Shark that delivered the killshots — er, kill bites? Following Harley into Starro’s massive eyes, the creatures bit at every piece of nerve they could find, filling the eye with blood and eventually killing Starro.

As he fell, he used one of his possessed humans to relay his final words: that he was happy just floating through space.

It’s an absolute gut punch of a line that really summed up the whole theme of the movie. Every member of the Suicide Squad, dead and alive, were put into this situation because the U.S. made an obnoxiously poor decision, got involved where it shouldn’t and then tried to cover it up. They were made into pawns, just like Starro was made into a villain, simply because of national hubris.

Then there’s Colonel Rick Flagg. Joel Kinnaman reprised his role from David Ayer’s “Suicide Squad” to perfection, if not better. Though Flagg doesn’t have June (Cara Delevigne) this time around, he still has that humanity in him — and without it being tied to just one person, we really got to see him evolve as a character.

Here, he was much more open to joking and bantering with his team. He gave Bloodsport (Idris Elba) a hard time because they were old soldier buddies. He indulged Harley’s oddities, reminding The Thinker that though he wouldn’t actually be killed if he coughed without covering his mouth, as Harley suggested, that didn’t mean he had an open invitation to do so.

And because the mission wasn’t rooted in protecting his one true love, Flagg was far more ready to deviate from his mandate in order to protect the greater good. He wanted the press to know exactly why Starro was on the loose, and how the alien even came to be. He fought with everything he had to serve his people, not just his country.

Unfortunately, Peacemaker (John Cena) operates on a far more twisted form of logic. He wants peace at all costs, and he doesn’t care who he has to kill to make that happen. And in his eyes, that meant stabbing Flagg directly in the chest with a piece of broken tile.

Once again, it’s brutal, but it’s earned in every way. Flagg is a character viewers have spent two movies with now; we know this guy. And really, this is the only way he could’ve gone out of this world.

Beyonce Treats Fans to Star-Studded Trailer for ‘Black Is King’