At this year’s Sundance Film Festival, there were the usual premieres and Q. and A. sessions, breakouts and crowd-pleasers — but no actual crowd. Because of the pandemic, the Park City, Utah, event was pared back and conducted largely online. None of the attendees could, say, meet by chance and talk movies, and it was hard to get a sense of the festival overall. To rectify that, we asked the co-chief film critic A.O. Scott, the critic Devika Girish, and the reporters Kyle Buchanan and Nicole Sperling to compare notes. Here are excerpts from their conversation:

NICOLE SPERLING I’m usually whiny and cranky about Sundance. Why are we in the snow? Why January? I could see all you people in Los Angeles. But this year, I was so nostalgic for every bit of the experience. I wanted nothing more than to be packed into a crowded shuttle bus, talking to strangers about tiny movies. I was so craving everything Sundance stands for that I even tuned in to festival director Tabitha Jackson’s morning broadcasts, something I would never do if I was actually in Utah, just to get an inkling of that geeky film love I was missing.

DEVIKA GIRISH It was fun to be able to browse the program so conveniently (and to “walk out” of a lost cause without stepping on people’s toes), but it made my festival FOMO much worse! In Park City, there are geographical and material limits on what you can see and when. And if you’re famished, you choose dinner over a movie. But at home, on my couch, armed with takeout, I had at least 25 films to choose from at any given moment during the weekend. I spent a lot of time dipping in and out, and worrying that I was making all the wrong choices.

SPERLING The feel-good movies really felt good this year, like “Coda,” the opening-night narrative film centered on a hearing teenage girl raised by her deaf parents. People glommed onto what was really a traditional story of struggle and triumph told about a demographic we don’t know enough about, a reminder that a movie well made yet sentimental can really work at this moment. I think it’s also why the documentaries on Rita Moreno and “Sesame Street” played so well in my house. Both were filled with joy and hope, things that make a big difference during this endless lockdown. 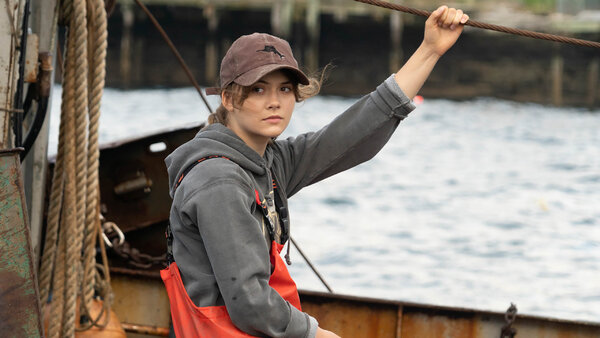 A.O. SCOTT On its own terms, “Coda” feels like a Sundance movie with all the rough edges sanded off. It has a specific, American location, a coming-of-age narrative, a class angle and an important representational agenda, and it handles all of these elements with the utmost caution. Every beat of the plot was signaled far in advance, and arrived with the assurance that nothing too terrible would happen. The performances of the deaf and hearing actors together were wonderful, but the conventional story sold out the reality of the characters’ lives. This will make for perfectly unobjectionable family television viewing, but that’s not necessarily what I look for at Sundance.

KYLE BUCHANAN I agree with Tony. “Coda” is effective the same way a sitcom is effective, but the swerves and texture of real life are sadly lacking. It plays well because the actors are committed, but I was embarrassed at some of the hacky, seen-it-a-million-times scenarios they were called upon to animate.

SPERLING: “Coda” won one of the grand-jury prizes and sold for $25 million. It will be interesting to see if the feel-good sentiment will remain when Apple decides to release the film.

SCOTT I understand the appeal of “Coda,” but I’m still a bit startled at the scale of its triumph and the $25 million that Apple+ paid, partly because we will never know if it was a good investment. In previous years, the big-money Sundance sales were tested at the box office, where ordinary ticket-buyers validated or (more often) undermined the judgment of eager distributors.

BUCHANAN To me, there was a letdown I felt watching many of these movies: The settings were gratifyingly specific, but the structure was straight out of Syd Field. I’m thinking of “Jockey,” a well-made horse-racing drama that nevertheless feels like the studio-notes version of Chloé Zhao’s “The Rider,” or even “Pleasure,” a clever and explicit treatise on pornography from the director Ninja Thyberg.

“Pleasure” is at its best when it follows its lead character — an aspiring adult-film actress named Bella Cherry — through a series of naturalistic encounters that explore consent and coercion on triple-X sets. So why, in a film this daring, is Bella’s character arc so devoid of surprises? “Pleasure” continually telegraphs who Bella will betray and how in order to get ahead, and I kept waiting for a swerve that never came. (A movie this nervy should not be stealing its plot beats from “Showgirls.”)

GIRISH One of my few surprise discoveries in the fiction slate was “We’re All Going to the World’s Fair,” a disquieting little film about a lonely, internet-obsessed teenager that hit me hard in my own solitude. But my highlights were the Opening Night documentaries. Questlove’s “Summer of Soul” brought the Harlem Cultural Festival of 1969 into my living room, with rousing performances by Nina Simone, Stevie Wonder, Mahalia Jackson and more. I was most captivated by the shots of the concert’s massive audience: A wistful spectacle of collective joy, grief and resistance.

Nanfu Wang’s “In the Same Breath,” an incredibly thoughtful, personal and well-reported look at the propaganda-fueled narratives surrounding Covid-19 in China and the United States, offered a sobering full-circle moment. Starting the festival with these documentaries was a solemn reminder of why we were attending Sundance 2021 from home, and what (despite some of the perks of a virtual festival) we lose when we can no longer gather together in space and time.

BUCHANAN Only the documentaries managed to truly keep me on my toes. There’s a moment in “Flee,” about an Afghan refugee smuggled to Europe, when the protagonist admits to family members for the first time that he is gay. I immediately braced myself for how this would go in any other Sundance movie, but what actually happened next — a reveal I will not spoil — caught me off guard and moved me to tears. Minor miracles can happen when independent films shake off the yoke of plot and let themselves be guided by the breath of real life.

SPERLING “In the Same Breath” really stuck with me. So did Peter Nicks’s “Homeroom,” which tracked a group of activist high school seniors in Oakland last spring, as they watched their final year from their bedrooms and grappled with the killing of George Floyd. Sundance’s curation this year felt spot-on to me: fitting the festival squarely into the moment we are living through, not shying away from the momentous problems we are facing, while also offering some hope.

Netflix movies vs Amazon Prime: Which streaming platform has the most movies?