There’s a moment in “Gunda,” an artful documentary about barnyard animals, that could take its place in a list of the year’s best scenes. The star, a sow with a bustling litter of piglets, has just experienced an unmistakable trauma. Pacing around the farm, she conveys a palpable agitation and emotion, before turning to look at the camera, pointedly.

This isn’t the sort of thing we’re accustomed to seeing in nature films. It feels as if we’re getting a glimpse into Gunda’s inner life, and there’s no narrator telling us what the animal might be thinking. It’s emotionally engaging and feels distinctive to Gunda, instead of an illustration of the species or the planet as a whole.

More frequently, a voice-over and a crystal-clear story guide our attention and define our understanding of what we’re seeing in a nature documentary. There’s no shortage of drama, to be sure, but usually it’s spectacular: tales of survival or mass migration. Even when we’re not looking at a panorama on the scale of “Planet Earth,” the greater context seems to overshadow the individual animal.

But there are signs of new directions in how animals are portrayed in nature films. “Gunda,” which opened Friday via virtual cinema, feels like part of this movement, along with a different but also unusual film, “My Octopus Teacher” on Netflix. Both present animals as beings apart from us, not just objects of wonder or scientific study, and with qualities that are all their own, not shadows of human emotions.

“Let’s film animals the same way we film humans,” Victor Kossakovsky, the director of “Gunda,” said he told his cameraman. “If you feel like they need space, let them be. If you feel they are comfortable, you come closer.”

You’ve probably already had “My Octopus Teacher” recommended to you by friends or family: Over the course of a year, a South African naturalist, Craig Foster, becomes fascinated by and (let’s just say it) emotionally involved with a small octopus. We observe the vicissitudes of her life and moments of contact with Foster, who explains his experience in interview segments that have the candor of a therapy session.

What makes the film stand out is that this is most definitely not a god’s-eye account of an octopus’s life. Foster’s ardent curiosity reflects a different approach to animals than that of the traditionally authoritative conservationist or guide.

“They’re more or less letting the animals live, and they’re trusting the viewers more to make their own conclusions,” said Dennis Aig, a film professor at Montana State University, where he runs a program on nature filmmaking. “Even in larger blue-chip movies, this kind of sensitivity is starting to emerge.” 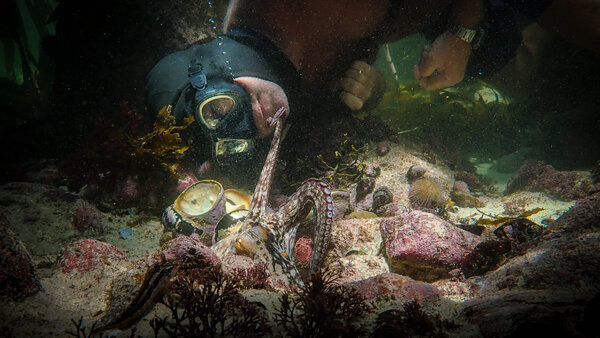 Blue-chip documentaries like the dazzling “Planet Earth” series loom large in the minds of many viewers. But nature films have had an evolving lineage. Early 20th-century accounts of safaris and exploration gave way to Disney’s anthropomorphic appreciations of the animal kingdom. Eventually, a conservationist ethos and sense of scientific discovery took hold, with a perceived desire for spectacular shots (no doubt given a boost by the arrival of HD television and ever larger screens in the 2000s).

Popular interest in these films has only grown — especially against the urgent backdrop of climate change — with viewership increasing and more nature shows than ever before. But a particular strand of filmmaking has persisted among the explorations and explications of nature’s mysteries, and its likely origins arose decades ago.

“I think Jane Goodall started this work with her first early work on chimps,” Pippa Ehrlich, one of the two directors of “My Octopus Teacher,” said. “I think it’s been a slow change over time.”

The nature programs that followed Goodall’s immersive research shared her perceptive evaluation of the chimpanzees’ personalities, emotional states and interpersonal relationships. It’s scientific in approach, but her open-minded point of view and profound insights into emotional intelligence inform the filmmaking. That paved the way for forms of engagement that do not mean solely to elicit sympathy but rather open up a new kind of space for the animals and their individuality, as in “My Octopus Teacher” and “Gunda.”

“Hopefully the lesson is that, actually, everywhere you turn there are complex personalities in nature that just haven’t been documented yet,” James Reed, Ehrlich’s co-director, said.

Films like “Gunda” and “My Octopus Teacher” join predecessors like “My Life as a Turkey,” a 2011 TV documentary in which a man raises a group of turkeys and susses out their traits and habits. “Kedi” (2017) might also be a recent influence, partly for its popularity, but also for its detailed accounts of Istanbul’s street cats. On the more conventional side “The Elephant Queen” (2019) seeks out an emotional intimacy that feels fresh and similar in spirit.

In “Gunda,” we can learn about the particular cautious intelligence of a chicken picking its way into the grass, or spot personality traits among piglets in Gunda’s brood. “My Octopus Teacher” surprises many with the strangeness of its subject: a mollusk with barely distinguishable eyes, that demonstrates a kind of light-footed moxie and reserves of iron will.

The filmmakers avoided giving the octopus a name (though they do refer to the animal as a female), specifically to sidestep the impulse to humanize her behavior — long a point of tension in nature documentary.

“There’s no question that drawing comparisons with people has been a great convenience and sometimes very educational storytelling strategy,” Aig said. “But it is limited in many ways, because as our knowledge of science increases, we also realize that there are differences in why certain species do what they do.”

The tendency toward portraying animals with nuanced, individual depth is driven by this growing knowledge and interest in animal intelligence, often across disciplines. New understandings of the planet recognize the coexistence of all animals, and, Aig said, younger audiences seem driven by an urge to relate to nature rather than exert a kind of mastery through knowledge.

The moment opens up the possibility of seeking out and identifying thought processes particular to animals. Reed emphasized the importance of the feature-length focus on a single animal (or two, counting Foster) in “My Octopus Teacher,” and the camerawork that allowed them to show “how she felt the world, how she perceived it.”

It’s a close encounter of a sort that’s becoming more apparent in nature documentaries — both physical and emotional.

'A Quiet Place 2': This is What Convinced John Krasinski to Make a Sequel