Zendaya knows how to pay homage to those who came before her.

On Thursday evening, the star’s longtime stylist, Law Roach, took to Instagram to announce that his client would be wearing a bold-shoulder vintage YSL gown to the ESSENCE Black Women in Hollywood Awards ceremony in L.A. The piece was originally owned by Ebony Fashion Fair founder Eunice Johnson in 1982. A trailblazer for Black women everywhere, the business mogul famously wore the haute couture piece, which now resides in Roach’s personal archives, on the magazine’s 25th anniversary cover.

Looking every bit as regal, Zendaya paired the duchess satin gown with chandelier earrings and opulent rings from Bulgari, along with a deep side part and Old Hollywood curls to embody the ’80s feel. She complemented the glamorous ensemble with a pair of black pointed-toe Hangisi pumps from Manolo Blahnik. Keeping the rest of the look comparatively minimal, the Emmy-winning actress didn’t wear a necklace, letting the exaggerated proportions speak for themselves.

This isn’t the first time that the Euphoria star has channeled Old Black Hollywood for her big moments. For her cover story with ESSENCE, she emulated the quirky yet sultry spirit of Black supermodel Donyale Luna. Luna was a force to be reckoned with in Europe during the ’60s in both fashion and Hollywood as an actress, so for Zendaya, the tribute made sense.

“A lot of what I do, specifically within fashion, is a tribute to fashion icons who came before me—many of whom are Black women,” the celebrity explained during her interview. “I love the way it turned out. I’m very proud of it.” 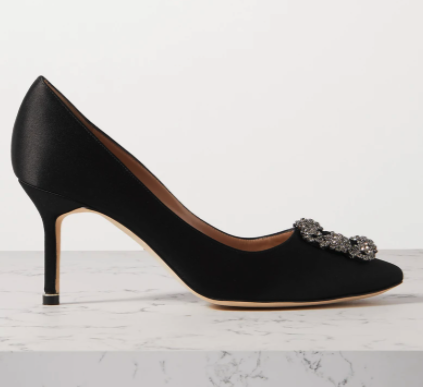