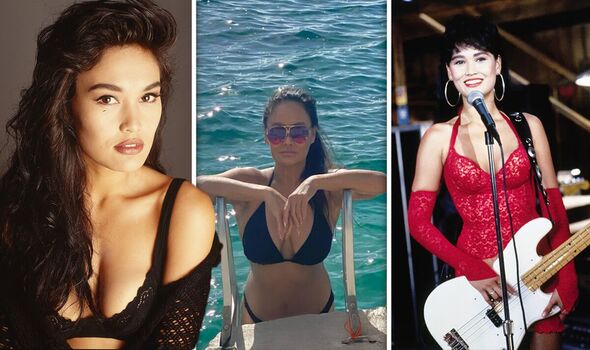 Wayne’s World star Tia Carrere wowed her 122,000 Instagram followers yesterday, as she kicked off 2023 by sharing a series of incredibly youthful snaps. The actress, who showed off her impossibly-youthful physique in a black bikini, was also celebrating her 56th birthday.

Tia looked phenomenal as she was seen soaking up the sun in a black, triangle bikini whilst posing on some metal steps as she prepared to take a dip in the sea.

The General Hospital actress swept her hair back into a ponytail and accessorised with a large pair of dark, purple-tint sunglasses.

The star, who is enjoying a tropical getaway in the Bahamas for the New Year, could also be seen having fun on a paddleboard in the clear ocean water.

“#Happynewyear #happybirthday to me,” she captioned the photos with a smiley face, before expressing her gratitude towards her pal who had joined her on the luxurious holiday.

The Wayne’s World star posed on some steps in a black triangle bikini and some big sunglasses, before taking a dip in the shimmering blue sea behind her.

Tia Carrere showed off her adventurous side as she attempted paddleboarding

The General Hospital actress impressed her followers, as she stood confidently on the large paddle board in the middle of the ocean.

The star shared the moment the clock struck midnight, as fireworks lit up the sky above her and a pal.

The fashionable former model threw on a straw hat decorated with some colourful embellishments, which she wore over her long, dark tresses.

The True Lies star panned the camera to showcase the stunning, clear ocean view that surrounded her.

The singer played Cassandra Wong, lead vocalist and bassist of the local rock band Crucial Taunt, in the icon films.

Marriage Issues Between Kim Kardashian & Kanye West Will Reportedly Be Featured On KUWTK!!