Donald Trump prematurely declared that he won the 2020 election while it was still being counted, and threatened to demand the Supreme Court stop counting ‘fraud’ votes.

Nearing 3:00am ET on Election Night, Donald Trump declared the 2020 presidential election a sham, and vowed to get the Supreme Court to intervene immediately. The president, 74, insisted in a rambling speech at the White House that he had already won the election, and alleged that the Democrats were falsifying votes to give Joe Biden the win. His solution? Demand that polling stations stop counting ballots and committing “a major fraud on our nation.”

Trump started off by naming a list of states where he had already won, like Texas, and expressed confusion about why results weren’t declared in others. That’s easy: they just haven’t yet. At the time of his speech, a staggering number of votes had not been tabulated yet in the United States. Biden was slightly ahead of Trump, 238 to 218 electoral votes. “All of the sudden, everything just stopped,” the president said. “This is a fraud on the American public. This is an embarrassment to the country. We were getting ready to win this election. Frankly, we did win this election.

“So our goal now is to ensure the integrity for the good of this nation,” Trump continued. “We’ll be going to the US Supreme Court. We want all voting to stop. We don’t want them to find any ballots at 4:00am and add them to the list. To me, this is a very sad moment. And we will win this. And as far as I’m concerned, we already have won this.” Trump did not fully explain what he meant by “stopping” votes, but it should be noted that he has no legal power to demand such a thing of the Supreme Court.

Trump’s premature celebration comes two days after he went viral for threatening to fire Dr. Anthony Fauci, the nation’s foremost infectious disease expert. Fauci, 79, a longtime Trump target, had questioned the president’s inaction during the pandemic in an interview over the weekend, which the White House criticized in a statement. Deputy press secretary Judd Deere lashed out at Fauci for “playing politics” by saying that Joe Biden had a plan for combatting coronavirus.

At a Florida campaign rally, the crowd chanted “fire Fauci” as Trump complained about the continuous media coverage of the pandemic.Trump basked in the cheers for a few seconds, then said, ““Don’t tell anybody, but let me wait until a little bit after the election. I appreciate the advice. He’s been wrong a lot.” The crowd cheered, and Trump mentioned that we “wouldn’t hear” about COVID-19 anymore “on November 4.” 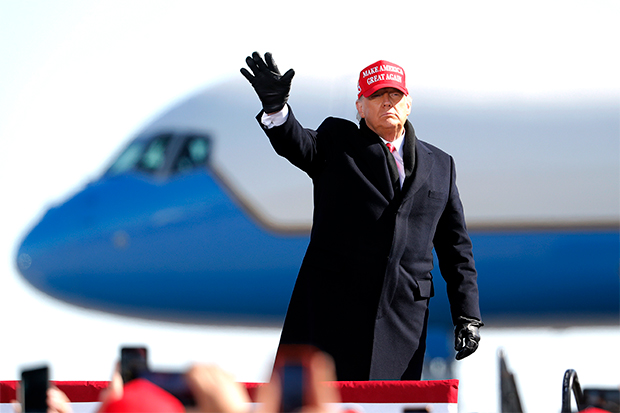 Trump was also embroiled in a mild scandal when the highly-anticipated sequel to Borat dropped on October 22. At one point in Borat Subsequent Moviefilm: Delivery of Prodigious Bribe to American Regime for Make Benefit Once Glorious Nation of Kazakhstan, Sacha Baron Cohen disguised himself in an elaborate Trump costume to crash a GOP conference. Cohen was carrying his “teenage” daughter Tutar (Maria Bakalova, 24) over his shoulder to present as a “gift” to Mike Pence.

Trump called Cohen a “phony guy” and a “creep.” Cohen responded on Twitter, “Donald — I appreciate the free publicity for Borat! I admit, I don’t find you funny either. But yet the whole world laughs at you. I’m always looking for people to play racist buffoons, and you’ll need a job after Jan. 20. Let’s talk!”

Who Is Princess Mary? The Downton Abbey Visitor Was Also Shy In Real Life

Dwayne ‘The Rock’ Johnson Mesmerizes The Internet With His Rugged AF Hands!