For first- and second-time voters, casting your ballot can feel intimidating. There are so many important issues to consider — how do you know which ones you should pay attention to, or which ones will affect your life most? In Elite Daily’s election series, I’ve Got Issues, we’re having conversations with young voters all across the country who hold different opinions on some of the biggest “dealbreaker” issues in politics. Here’s how they feel about the major topics impacting their vote in November, and what young voters like them should know before heading to the polls.

For the second installment of our series, we asked two young voters to share their thoughts on climate change. Allie L., 22, is a volunteer with the Sunrise Movement in Michigan, and she works full-time for the Future Coalition. She is a registered Democrat, and first voted in the 2016 presidential election. Katie K., 20, is a college student in Michigan who volunteers with the American Conservation Coalition (ACC). She is a registered Republican, and 2020 will mark her first time voting in a presidential election.

This interview has been edited for length and clarity.

Why is addressing climate change important to you? Is it a make-or-break, dealbreaker issue this November?

Katie: I grew up in Michigan, and there’s a lot of nature around — I grew a connection with it. I’ve always felt it’s important to protect this amazing earth we’ve been given, with all of its resources.

Addressing climate change has become a very partisan issue, and I don’t think it should be. The most important thing for us to do now is come together to save our own planet. We’ve only got one earth, and we have to take care of it.

Allie: I also grew up in Michigan, where water is very important. Our Great Lakes and many rivers are where we spend our summers, they’re what our towns are centered around. I learned with the Flint water crisis that clean water’s not guaranteed. What we love is disappearing, and there’s no guarantee it’s going to be protected.

We talked about climate change when I was in high school, but we almost never discussed solutions. The lesson plans usually ended with something along the lines of, “Your generation is going to figure it out. You’re going to save us.”

I study environmental policy because I want to make sure we protect our water, and that my dad, who works in the auto industry, can stay employed. When I first heard about the Green New Deal, it felt like there are people who care about my family, and care about making sure workers aren’t left behind when solving the climate crisis.

Katie: Climate change is one of the most important issues for me, and I like to see candidates take it seriously on both sides of the aisle. Right now, John James is running in Michigan for the Senate on the Republican side. If he said he was supporting the American Climate Contract (ACC), I would 100% be more inclined to support him.

Allie: Climate change is my most important consideration when voting. The longer we wait to address it, the harder it will be to preserve the places we know. In a general election, I vote Democrat because I think it’ll be easier to organize for a Green New Deal under a Democrat than a Republican.

How do you research the stances of candidates as you prepare to vote?

Allie: My research isn’t structured. I have friends who are really enthusiastic about policy specifics, so I talk to them, and I check candidates’ websites. Watching candidate interviews will tell you how much they actually know, and how dedicated they are to addressing climate change.

The values I’m looking for are usually investment in frontline communities who are hit hardest by pollution or by disasters. I also like to see if a candidate talks about good-paying union jobs. Those are two big signals of how dedicated they are to a people-centered approach to tackling climate change.

Katie: I look at if they’ve supported climate change bills in the past, especially bipartisan bills. Candidates on either side will say they support climate change legislation, but when you look at the roll calls, they voted against it. So I like seeing the roll call votes. I like to see if they co-sponsored a bill, because that shows they’re willing to put the work in. I also check different advocacy groups and their endorsement lists.

Allie: You can also look up where candidates are getting their contributions from. If someone is taking fossil fuel money, that says a lot about how committed they are to actually putting forward solutions that reflect people’s needs. Is there anything you wish politicians talked about more often?

Katie: Conservation in general, whether it be endangered species, different farmlands, or national parks. If you look deeper into these issues — like a backlog of national parks funding or lack of funding for the Land and Water Conservation Fund — you find out about things that have been ignored.

Allie: I don’t think politicians actually discuss what’s at stake. They’ll talk about climate change legislation, but there are a lot of issues that don’t get discussed, like farming. I want to be able to tell my farmer family members there’s policy out there to make sure small farms will make it through the climate crisis. They’ll need a ton of support, and no one’s really talking to the needs of farmers.

Katie: Also, I had no idea [blue carbon ecosystems] were a big thing until I started working for ACC. Wetlands, mangroves, and marshes are such a big part of the Floridian ecosystem and other states down there. They protect our country without us even realizing it.

Allie: There’s this really beautiful video of Alexandria Ocasio-Cortez envisioning a future with the Green New Deal, and there’s a character in it who actually restores wetlands as a government-paid job. It reminds me of the Civilian Conservation Corps from the original New Deal. There was this huge investment to reforest Michigan during the New Deal and to employ tons of people, and those trees still stand today. It’s something we’ve done before as a country, and should do again.

What’s at stake for your generation if climate change isn’t properly addressed by the people in power?

Allie: I don’t think it’s possible to comprehend the crisis barreling down on us. Part of the reason why we don’t talk about the stakes is because it’s really hard to sit with it without knowing what to do about it. I’m involved in the climate movement because the only way I can deal with climate anxiety is by looking for solutions.

Katie: I work as a ski patroller at a ski resort, and last winter we had a record of the lowest snowfall in a while. The time between Christmas and New Year’s is our busiest period, and I think we had, like, 80 early checkouts because there was no snow. Once the resort goes down, that tourist town around it is going to go down, too. People are going to lose their jobs and relocate. It’s such a domino effect.

I think our generation’s already doing a great job, but we still need [action from] people who are in the government right now. We need to encourage the older generations to take a stand while they still can.

Allie: There’s so much to lose. In the Midwest, we’re looking at a ton of flooding. Our Great Lakes are going to completely change, and it’s going to impact our economy here.

Would you ever not vote in an election if you didn’t feel either candidate lived up to your expectations on addressing climate change?

Allie: My first vote ever was for Hillary Clinton [in 2016], although I didn’t think she had a solid climate plan. But I knew she had more of a chance of addressing climate change than Trump.

I don’t think [Joe Biden’s] climate plan is robust enough, but it has dramatically improved over the past year because of pressure from young people who have been protesting, calling his offices, organizing their friends to vote. That gives me hope if he assumes office, by working with the tools we have to influence politics, we’re more likely to push him to address the climate crisis than if Trump is in office.

Katie: I’ll never not vote. I try to look at stances. I’ve never straight-ticketed a ballot — I want to look at the big picture from both candidates. Right now, I’m having a crisis with the 2020 presidential election, but I would vote for who I believe will make a difference, and is aligned with as many of my values as possible. I don’t think I would vote for somebody who isn’t willing to take a stand against climate change.

Allie: I’ve never expected a politician on their own to bring about substantial change. All of the big changes we’ve seen in this country have been due to movements. We’re never going to elect someone and then be able to sit back and watch things change.

Katie: I want to see people in office who are willing to reach across the aisle. This young generation of conservatives, we’re finally willing to talk about climate and solutions. If candidates are willing to talk to us about that, that automatically makes them better in my eyes. 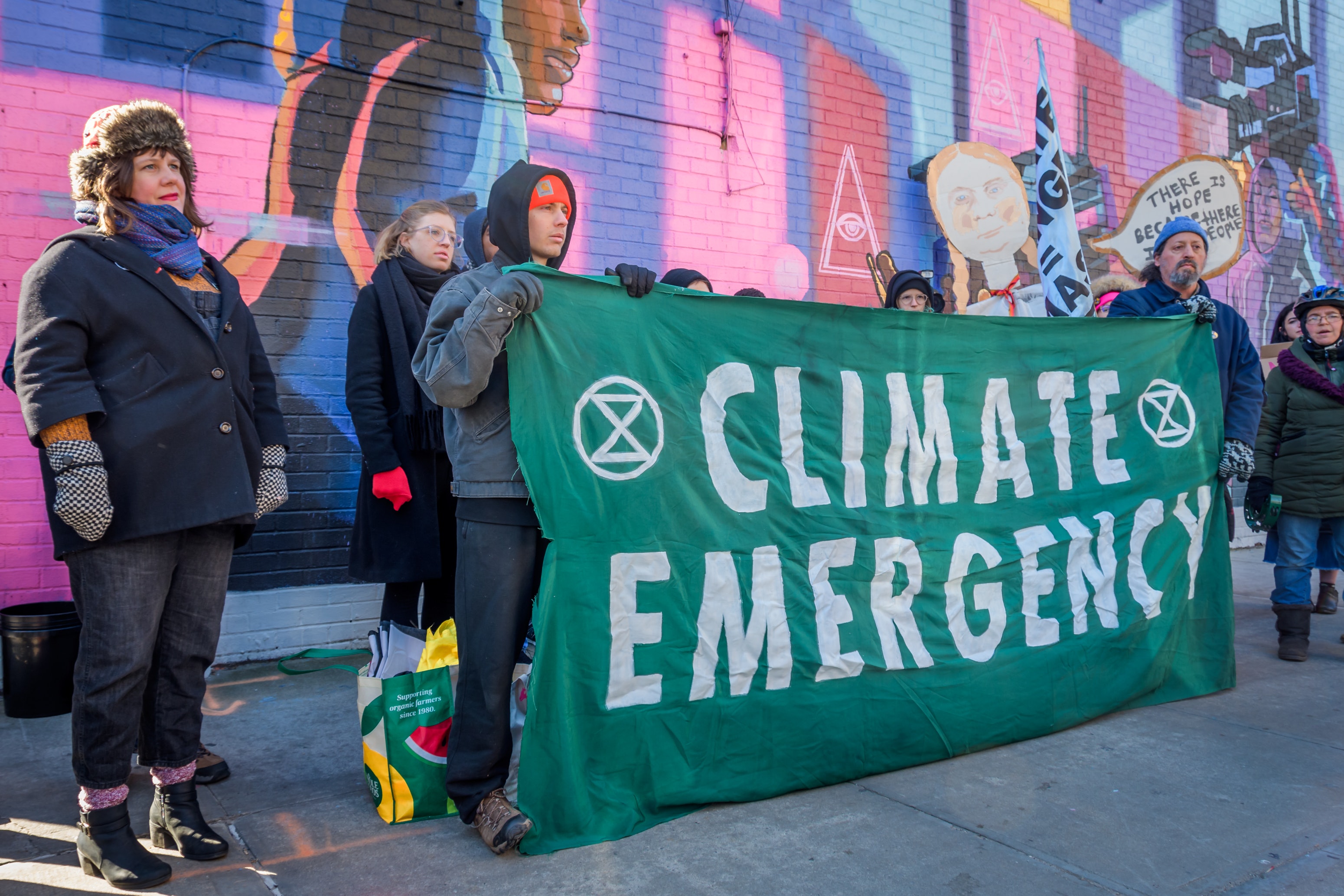 You each champion a different kind of climate change legislation. What drew you to each plan?

Katie: I support the ACC because it supports realistic goals. It works with the system that’s already in place to improve it to a point where we’re successfully combating climate change and helping the environment. It’s about improving the system, not avoiding it.

Allie: What initially appealed to me about the Green New Deal is that it doesn’t try to come up with a fancy solution. It looks at what people are experiencing and asks, “What do we need to do to get people, in a just way, from where we are now to a future where we are able to mitigate the impacts of the climate crisis?” The jobs guarantee is one of the most important pieces of this legislation package, because for too long we’ve pitted climate change against jobs. In reality, solving the climate crisis is going to create jobs.

The climate change packages you support have different approaches, but you seem to land on common ground when it comes to the urgency of addressing climate change. Do you see this as the way moving forward?

Allie: We have different philosophies about what’s possible or what government is able to do, but at the end of the day, we’ll be able to work together because our goal is the same: to protect the people and the places we love.

Katie: I have so much confidence in our generation to stand up and make a change, because young conservatives want to have a voice on climate. This issue should be something we can all agree on.

Your voice matters. So does your vote. Make sure both are heard and counted in the 2020 election by registering to vote right now.

Mary Duggar, grandmother on 'Counting On,' dead at 73

Best hair masks to revive your hair at home