The fallout between Taylor Swift and her onetime best friend Karlie Kloss reportedly started when the model took advantage of the singer’s generous hospitality.

Swift has previously said that Kloss had her very own room, complete with her favorite snack foods at the ready, at the singer’s $47.7 million Tribeca compound. But an insider told The Post that Swift was “furious” when Kloss invited friends over to the home without first getting approval.

Although both camps deny this happened, a source admits that the two had a tiff that turned into “something crazy.”

“Taylor got upset over something crazy and then she just alienated Karlie,” she told The Post. Kloss’ rep denies this.

Sources say this is just another example of Swift, whose new album, “Lover,” is out Aug. 23, overreacting to a situation.

In fact, Swift turned down invites to both of Kloss’ wedding ceremonies when she married her long-term boyfriend last year, according to a source close to both camps. However, Kloss’ rep says Swift was unable to attend due to prior commitments.

“She always does the same thing: She trips up when she goes further than she needed to,” said a source in regards to Scooter Braun, who’s the latest to be deemed one of Swift’s enemies, after he purchased Big Machine Records, the singer’s former label, for a reported $500 million in June.

Swift, 29, took to Tumblr to call the sale, which included the master recordings from her first six albums, her “worst case scenario” — and accuse Braun, who manages Justin Bieber, Ariana Grande and Demi Lovato, of “incessant, manipulative” bullying. 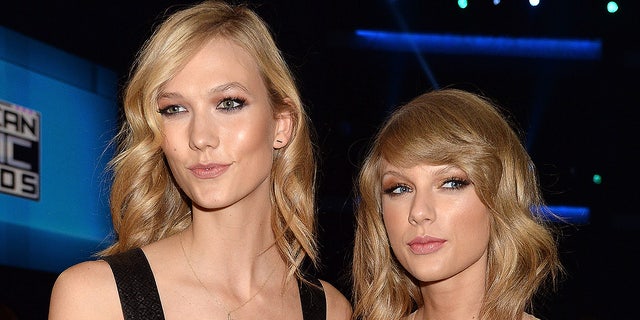 Karlie Kloss and Taylor at the 2014 American Music Awards in Los Angeles. The pair used to be best friends.
(Getty, File)

Furthermore, she claimed that she learned of the deal only when it was announced and that she “wasn’t given an opportunity to buy” back her music from Big Machine.

But both Scott Borchetta, founder of Big Machine, and Braun’s wife, Yael, contradicted this.

Yael posted on Instagram a message to Swift, reading in part: “You were given the opportunity to own your masters, you passed . . . Your dad is a shareholder and was notified and Borchetta personally told you before this came out.”

Said a source of Swift: “She didn’t need to say that she didn’t get told about the deal, when there is clear proof and text messages sent to her. She did the same thing about the Kim K-and-Kanye row [and then] Kim just published the conversation online.”

Indeed, in 2016, Swift lashed out about the Kanye West song “Famous,” which includes the lyrics, “I feel like me and Taylor might still have sex. Why? I made that b—h famous.”

But Kardashian then posted a Snapchat video of West on the phone with Swift.

Swift’s representative did not respond to requests for comment. Kloss’ rep says the two are still friends.

“She became famous very young,” said a music executive in the know. “And the behavior that we might accept from a young girl — stamping your feet, acting petulant — no longer stands when you’re a grown woman.”

In her cover story for the September issue of Vogue, soon to be on newsstands, Swift speaks out about public reaction to her feud with West and Kardashian, which led to a social media campaign to “cancel” her. 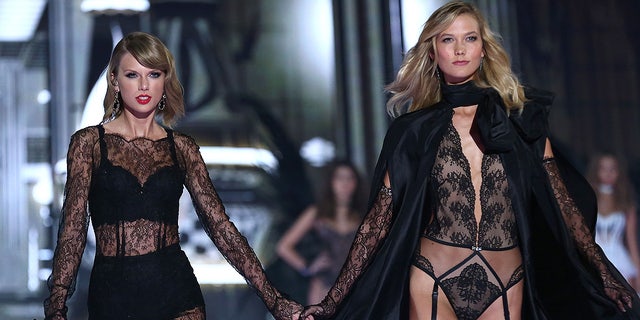 Taylor Swift and Karlie Kloss walking the runway at the Victoria’s Secret fashion show in London, in December 2014. The pair used to be so close that Kloss even had her own room in Swift’s New York City apartment.
(Getty, File)

“I don’t think there are that many people who can actually understand what it’s like to have millions of people hate you,” she said. “When you say someone is canceled, it’s not a TV show. It’s a ­human being. You’re sending mass amounts of messaging to this person to either shut up, disappear, or it could also be perceived as, Kill yourself.”

As a result, she said, “I realized I needed to restructure my life because it felt completely out of control.”

Over the years, Swift, who released her self-titled debut album at age 16, has changed her public persona: from sweet kid to glam country star to relatable girl to ’50s-inspired ingenue to ’80s pop star to vixen and more.

Her latest reinvention, for “Lover,” finds the singer — who has been dating British actor Joe Alwyn for three years — seemingly in love with love, amid a wash of rainbows.

“It’s difficult to tell who she really is — does she even know who she is?” asked one top music insider.

“She can act like poor little rich girl, when she has no need to,” said one source of the singer who owns $84 million in real estate and three planes.

One person who has worked closely with Swift described her to The Post as “a pill,” while another who was part of the recent Vogue cover shoot called her “heavenly to work with.”

One thing insiders seem to agree on is that, with Swift, everything is personal — and, in her anger, she sometimes has tunnel vision.

A source said of the Big Machine deal, “This is business, what doesn’t Taylor get about this? He was not doing this just to spite her — and she’s acting like it was a personal vendetta.”

According to insiders, Swift doesn’t just overreact out of anger or frustration. Even her relationships tend to be outsize on purpose.

The insider said that she assembled her famous “squad” as a result of having had so few friends growing up.

The rotating clique of celebrities included Kloss, models Gigi Hadid, Martha Hunt, Lily Aldridge and Cara Delevingne and actresses Lena Dunham, Zen­daya and Hailee Steinfeld, all of whom appeared in the 2015 video for “Bad Blood” — a song that is a strike against an unnamed female singer, widely believed to be Katy Perry.

“Even as an adult, I still have recurring flashbacks of sitting at lunch tables alone or hiding in a bathroom stall, or trying to make a new friend and being laughed at,” Swift wrote in Elle in March. “In my 20s, I found myself surrounded by girls who wanted to be my friend.”

She also admitted that some of those friendships are over, writing: “Something about ‘we’re in our young twenties!’ hurls people together into groups that can feel like your chosen family. And maybe they will be for the rest of your life. Or maybe they’ll just be your comrades for an important phase, but not forever.”

Kloss and Swift used to be thick as thieves — posing for a joint Vogue cover, holding hands on the Victoria’s ­Secret runway, gushing about each other in interviews and regularly posting Instagram photos of themselves having a grand old time.

But the pair have not been publicly seen together since August 2018, when Kloss was spotted at a Swift concert in Nashville. When Kloss married Josh Kushner in front of 80 guests in October 2018, Taylor was not there.

Nor was she at the larger celebration the couple held in Wyoming this June. When asked about Swift not going to the weddings, a source familiar with the situation pointed out that Braun had attended both events, adding, “Make of that what you will.”

Kloss’ rep, however, says the two are still friends, adding that Kloss herself confirmed the friendship herself during a “Vogue” 73 Questions interview last fall.

TAYLOR SWIFT'S FEUD WITH SCOOTER BRAUN: WHAT TO KNOW ABOUT THE BIG MACHINE RECORDS DEAL

A LONG, DRAWN OUT HISTORY OF TAYLOR SWIFT'S FEUDS

Braun’s company happens to manage Kloss’ career, and Braun and Kloss have become firm friends. Just yesterday Braun posted a vacation photo of the model, her husband and other pals, all smiling radiantly in front of a Mediterranean backdrop.

Swift, meanwhile, does seem to have learned one hard lesson about overdoing things.

In the past, she has flaunted her high-profile romances — with the likes of Joe Jonas, John Mayer, Harry Styles, Jake Gyllenhaal, DJ Calvin Harris and Tom Hiddleston — on Instagram and for paparazzi photos. Most of the relationships then publicly crashed and burned, fueling rage-filled songs from Swift.

“Taylor was happy to show off her relationships,” said the insider. “But she’s ended up with egg on her face.”

She and Alwyn have been seen in public together only a few times, and are reportedly shopping for a London home in the range of $30 million. “It’s the most private she’s been in any relationship,” said the insider. As a result, “it seems to be the happiest she’s been.”

Sources are happy that Swift seems to have learned something from her past mistakes. But they say not to count out her old ways just yet.

“Taylor is calculating and shrewd. Not that that’s a bad thing, but anyone who doesn’t think she feels like she has something to prove with ‘Lover’ is totally wrong,” said the music executive. “She wants to win.”

Dorit Kemsley: 25 Things You Don’t Know About Me!