From the start, "Birds of Prey" costume designer Erin Benach was told they weren't continuing with Harley Quinn's previous look on the big screen.

In "Suicide Squad," Harley wore a ripped T-shirt that read "Daddy's Lil' Monster" paired with, what can only be described as, booty shorts. Benach helped evolve Quinn's look in "Birds of Prey" as the antihero moves on from a rough breakup with the Joker.

"We wanted to have fun and I was given the reins to have fun. So we went for it," said Benach.

That included expanding Harley's color palette in the film from her iconic red and black looks to ones that helped evoke her bubbly personality. Benach went back to the character's inspiration, a "Days of Our Lives" clip featuring future Harley Quinn voice actress Arleen Sorkin, to help spark an idea that stayed in her mind as she worked on "BoP."

"She was so beautifully gold and silver, sparkly. I love the idea that Harley is attracted to sparkle and glitter and just can't help herself," said Benach of the clip, which helped inspire Harley's colorful new palette.

"I think the Arleen Sorkin bit was always affecting me because I loved the look of that scene," she added.

Harley's always a popular cosplay at conventions and we expect this year to be no different with so many new looks for the character. From a roller derby outfit to a golden jumpsuit, Benach walked Insider through the inspiration and design of some of the character's biggest looks in the new film. 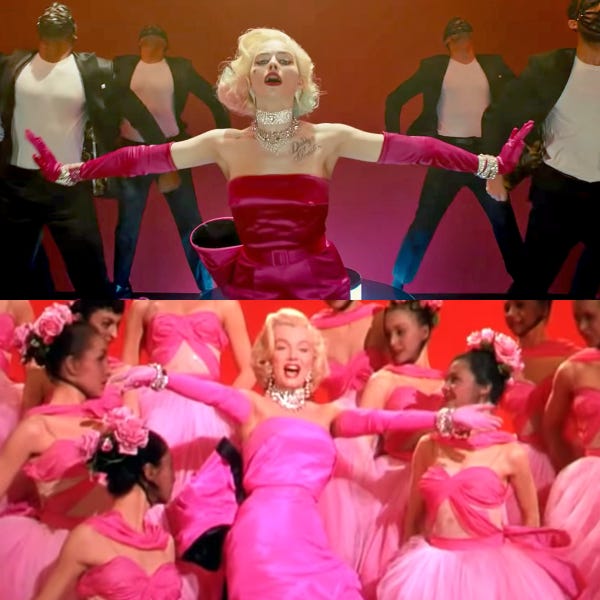 When Black Mask interrogates Harley she drifts off into a quick musical number featuring her character dressed up like Marilyn Monroe's character from 1953's "Gentleman Prefer Blondes." Instead of a full pink gown, Harley has an updated version of the outfit with pants.

"It wasn't even really on the page or decided amongst us that it would be the same Marilyn outfit," said Benach. "There were talks of it being something totally different and new, like way more Harley."

Inspiration for the look came to Benach while considering different looks worn by Monroe.

"I was sitting in the Western costume research library, sort of trying to come up with ideas of maybe similar time period design ideas from the Marilyn era," said Benach.

"I remember the moment where I just went, 'Oh my God, the best idea is just to take the exact Marilyn outfit and put her in pants, turn it into pants,'" she told Insider. "It was just one of those moments. It was just a light bulb moment and then it hit and I told [director] Cathy [Yan] and Cathy was like, 'Brilliant. Done. Do it.'"

The caution tape jacket is supposed to symbolize that Harley's the life of the party, but also someone you shouldn't mess with. 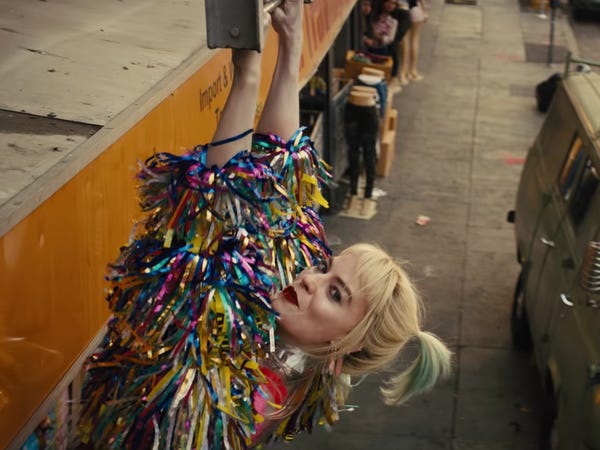 Harley wears the caution tape jacket with a see-through back early in the film as she blows up Ace Chemicals and then runs through the streets of Gotham City in an attempt to outrun the cops and some of Black Mask's men.

"Harley, she's anti-establishment," said Benach of the inspiration for the colorful jacket. "Caution tape is the scene of a crime and the establishment. It made so much sense to me that she would take that symbol and essentially deface it and take it on as her own."

Benach said the caution tape wings are supposed to have a do-it-yourself sensibility.

"She would be able to maybe make that jacket and come up with that idea and just say, 'I've broken up with The Joker. I'm independent now and I'm going to go party,'" said Benach of the symbolism behind the jacket.

Though feeling like a fun party, which is very much in line with Harley's personality, the caution tape is also supposed to add another level of subtext.

"The other part of caution tape is like, 'Don't f— with me,'" said Benach.

Benach said this outfit was her favorite one to create.

"I loved the sort of click in my and my assistant's brains the moment we figured out how and what we were going to make," she said.

"We figured out the fringe and we were like, 'It's just the sleeves and not the body too.' And [Harley] kind of looks like a bird and it's kind of a party," Benach added.

Harley's jumpsuit took the longest to get just right. 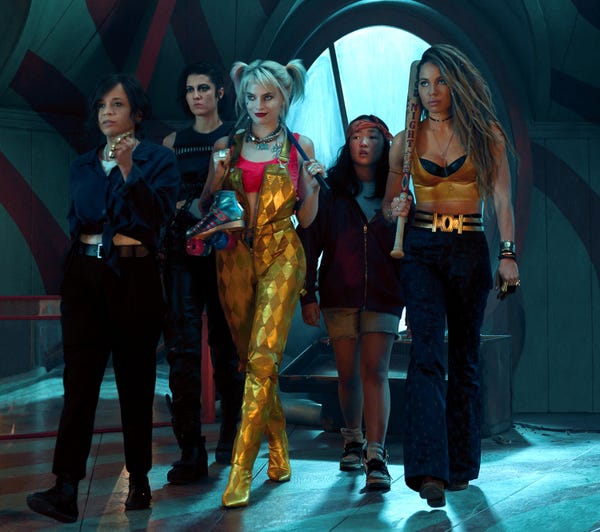 "It was really tricky because that leather is very hard to do stunts in and get as low as [Margot Robbie] and her stunt woman needed to get and do everything they needed to do," costume designer Erin Benach told Insider.

While the final version of Harley's jumpsuit in "Birds of Prey" is golden. Benach said they originally tested four colors, including Harley's iconic red and black suit colors.

"It really was determined by the kind of lighting that [director of photography] Matty [Libatique] was doing," said Benach of how they landed on a color. "And also we loved that it felt like the sparkle and the glitter and sort of the glam part of Harley that was sort waking up inside of her."

Read more: Harley Quinn's yellow jumpsuit in 'Birds of Prey' took the longest to get right and they tested it in 4 colors

Harley's iconic black and red colors were incorporated into her derby look.

Although "Birds of Prey" shows an evolution to Harley's character, especially in her fashion, they still incorporated her iconic red and black color scheme into a few looks in the film.

"We didn't really want to discard it and we actually use the color palette in her roller derby team," said Benach of how they used the red and black colors to honor Harley's legacy.

"We have a little bit of black and red in her shorts with the stripes and the stars and her cutoff shorts," said Benach. "I think it was more of a nod to it and reminds us this is where she came from."

If you look super closely, you'll notice the number 92 on Harley's sleeve, another nod to the character's introduction to the DC universe.

There's a lot of iconography Benach wants fans to find in the jacket Harley wears at the film's end.

Harley is seen at the film's very end wearing a sharp blazer with flames and covered in symbols. It's tough to make out everything from one watch of the movie.

Insider asked Benach if the flames on the shoulder pads were symbolic of Quinn's rise from the ashes or if we were projecting. She laughed heartily responding that it was "so cool" to hear how we interpreted the look.

"I dare anyone to try and find more of it," said Benach of symbolism that can be found in Harley's look. "I will just say, 'Look for the iconography in that jacket and you will giggle.'"

"The flames were a consistent icon that I just loved," she added. "We named her roller derby team the Gotham City Flames. She gets blown up. She lights stuff on fire. I just loved the iconography of it."

Benach worked closely with designer Discount Universe to work on the jacket.

"They custom-made the coat based on the symbols that I sent them," she said. "It was a very, very fun piece to make."

Benach also designed the jewelry you see on screen.

"We licensed the jewelry for 'Birds Of Prey' and all of Harley's looks and created a line," said Benach. "It has other fashion pieces all inspired by 'Birds Of Prey.' It's called Billie Valentine."

Harley ditches her old chain with a large letter J and replaces it with a new necklace made of several chains. Pendants ranging from a fishhook and safety pin to a key and dog tag for her hyena Bruce dangle from it.

Many of Benach's designs are available for purchase through Hot Topic and Rooster Teeth. 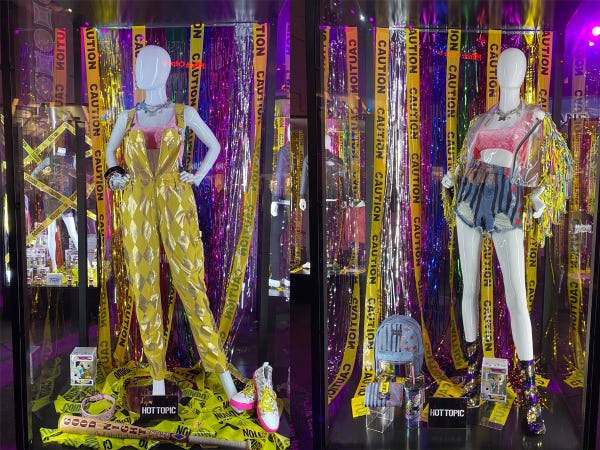 Benach said she wasn't designing with the idea of her looks hitting retail and that it's flattering to see people dressed up as all the different incarnations of Harley.

"I didn't think about it," said Benach of the possibility of the designs hitting retail.

"I did know it was a very popular costume from 'Suicide Squad,' so I knew there would be potential, that it was going to live on and have a life of its own," she added. "But I didn't design thinking about it and I didn't try to fulfill anything. I really just wanted to do the character justice and do my most creative work and I hope I did."

"Birds of Prey" is currently in theaters. You can read our review here.

Iggy Azalea Is Ready For Halloween In New TikTok Video

Tom Holland’s dad wants to ‘save Spider-Man’: ‘My hunch is that the show will continue’